His figurative works are perhaps less well known—largely because they have not always been exhibited—but portraiture either in oil or in photography has been recurring in his practice over the years. “Sometimes the portraiture is not facial,” he says, noting that for his 1997 mixed media installation Foot Print, he invited people to walk on a large stone island covered with water mixed with ink: “Around the island there was a canvas on the floor and after the people had walked on the stone, they would walk on the canvas leaving a faint footprint. Footprints are very individual, and over three months, there were endless footprints as people left their mark around the space. Although I didn’t draw in a face, the footprints were like a portrait of the people that came.”

For Human Traces, Zhang has turned to Chinese ink and charcoal on paper to create a series of soulful portraits of 42 individuals he has met and interviewed while in London for his project. The portraits are now crudely taped onto the wall, some of the papers are torn, others layered on top of one another. “I used several different types of paper, some rice paper I had brought with me from China, but also Japanese paper and some thick French paper I’ve found here. The idea is that the portraits are all linked to each other but this difference in paper also represents our differences,” he explains. “I layered the paper like layers you would find in an archaeological site. The paper is torn to evoke the idea of something unfinished, like a research place.”

The portraits are mixed with studies of classical statues that the artist saw at the Royal Academy, and the installation includes three of the sculptures now placed at the centre of the studio. “The sketches of the sculptures represent the past, while the portraits of the people I talked to in the street represent the present,” explains the artist. Zhang adds that although each of his projects is independent, they are all connected through his ongoing artistic investigation into the notion of time, cultural movement, and the nature of humankind.

“Human Traces is connected to Human Chapter,” he says, referring to a work first shown at an arts centre in Los Angeles in 2005 and later exhibited in the Guangdong Museum of Art, Guangzhou. For that project, Zhang had interviewed several people asking them a set of seven questions and then printed their photographs using a special emulsion that caused the images to fade over time. Before the fading process took effect, he would draw over the photograph using graphite. He would then re-photograph his work every few months in order to record the fading process. Eventually only the graphite remains. 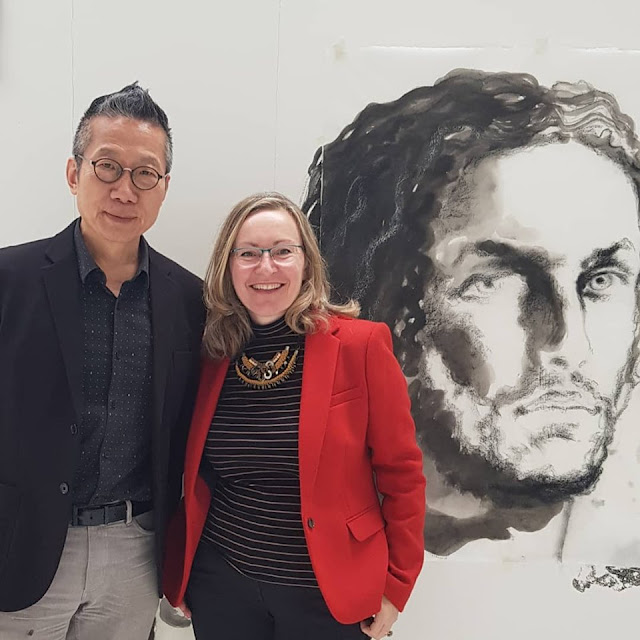 For Human Traces, Zhang approached people he met in London and asked them three questions: ‘What was the happiest experience in your life?’, ‘What was the saddest?’ and ‘What do you want to say to people 100 years in the future?’ The artist purposely tried to find people representing a spectrum of different ethnic and cultural backgrounds “to make their stories more significant.” The audio recordings of their answers are now playing, sometimes simultaneously, in the space, helping immerse visitors in the work, while reflecting on their own answers to Zhang’s questions.

“While the first two questions are very personal, the answers to the second question were actually very similar, which shows that beyond our cultural differences we are all the same. Most people said their saddest experience in life was losing a family member. That’s also my saddest experience,” he notes. Zhang points out that most people also had similar concerns about the future, often talking about issues related to ecology. “It’s a reflection of our time. And what’s interesting is that I asked a similar question in 2002, and at the time, people mostly talked about stopping war and stopping killing each other, which was right on the back of 9/11,” he says.

The artist hopes visitors will come to the exhibition and take a metaphorical view from above looking down. “I want them to see the whole picture. The past, the present and the future are linked. It’s like the flowing water, you cannot say there is a past or present or future, it all flows into each other,” he says.

After London, Human Traces will be exhibited in Hong Kong and it will continue to develop. “I see this project as an ongoing one. I got a lot of material in London and I cannot finish what I wanted to do, even if I worked 10 hours a day. There are still portraits I want to finish,” he says. Because he created some of the drawings directly on the walls of the studio, the next installation of Human Traces will necessarily be slightly different. “Ephemerality plays an important role in my work. When a drop of water falls in the river, the drop disappears but the water stays. It’s the same with my work. Whether the work stays there permanently or disappears over time, it’s still part of my work, the memory carries on,” he says.


Asked about what he would like to tell people in 100 years, he quips, “Fix the earth and make it as beautiful as possible before moving to Mars.”


THIS ARTICLE WAS FIRST PUBLISHED ON COBOSOCIAL.COM