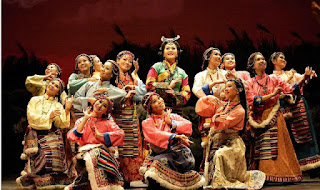 In the 7th century, a princess from the Tang Imperial Court travelled 1,000 miles to marry King Songtsen Gampo of Tibet as part of a peace treaty between the two ethnic groups. Hailed as the “first woman diplomat from China,” Princess Wen Cheng captured the hearts of her new subjects and to this day, tales about the historical figure continue to be part of Tibetan folklore.

“Princess Wen Cheng — The musical,” soon to be performed in Singapore, was first created in Kuala Lumpur in 2008 and has been performed in Taiwan, Beijing, and Xi’an. The Mandarin musical is a romanticized account of events, offering lavish costumes and a Western score by composerImee Ooi infused with traditional Chinese classical instruments, such as the erhu and the dizi.

Scriptwriter, director, and producer Ho Lin Huay said she chose the inspiring story in large part because she knew it would translate well visually on stage. “I’m also very attracted to the Tibetan culture, it’s very colorful and mystical,” she explained.

“Historically, there are only a few sentences about this princess that confirm she was real and how she married the Tibetan king, but there are a lot of legends and stories about her, with colorful and dramatic incidents about her as she had to cross river after river, and that’s what makes the story very interesting,” she added.

The musical highlights the positive legacy credited to the Princess’s arrival in Tibet such as introducing Buddhism to Tibet, while also bringing modern agriculture techniques, plant seeds, and books on traditional Chinese medicine. Under her influence, milling, spinning, pottery, papermaking, and brewing techniques from the Tang dynasty were transmitted to her subjects.

Ho says that along with some of her team, including lead singer Yang Wei Han, she set out to retrace parts of the same route the princess would have taken from Xi’an to Lhasa. But while it took the Princess three years, Ho’s team spent just 28 days travelling in a four-wheel drive though that was not without some problems. “It was quite tough because of the air altitude sickness. Maybe for her it wasn’t as bad because she travelled so slowly so she would have gotten used to it,” Ho said.

Yang, who has performed the King’s role since the first opening, said the story particularly resonated with audiences in China, many of whom were generally unfamiliar with the historical figure. “Though Tibet is a sensitive political issue, this specific story is a very positive one for China as the Princess brought a lot of positive development in the country,” he noted.

Yang says over the years, he has developed the character. “When I first started performing him, I use to do it grand to give him charisma, but I have realized I need to tone him down to make him more human. The costumes already say ‘I am the King’, so I don’t think I need to say it again loudly,” Yang explained of his view on the role.