In the Studio with British Artist Nigel Cooke 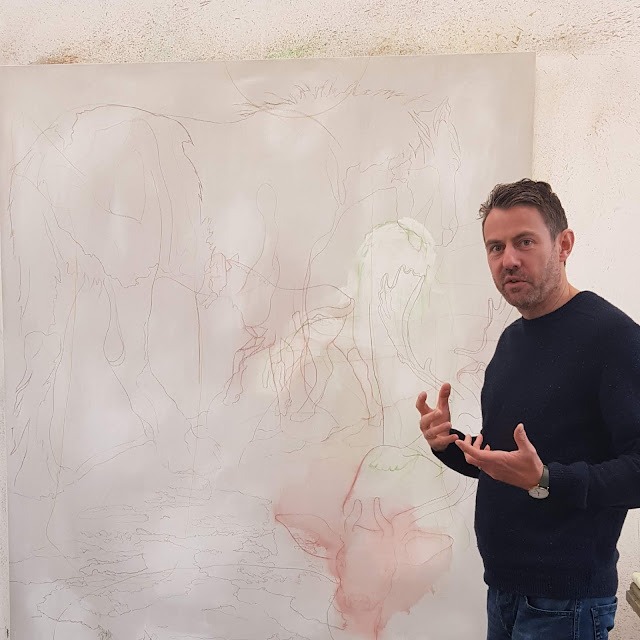 Ahead of Nigel Cooke’s first exhibition in Asia, at Pace Gallery in Hong Kong, I visited the British painter’s large Canterbury studio for a preview for COBOSocial.com.

I spoke with the artist about his new body of work that evokes memories of landscapes and emotions, balancing figuration with abstract techniques that distorts the objects and surfaces: 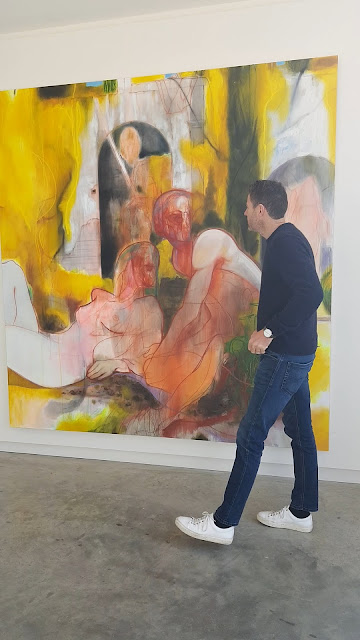 You haven’t had a show for two years. Why is that?I suppose it takes me a long time to make the work. Most of my energy goes into trying to find the next painting – it’s not like I have a thing to make (and) I make that and it goes off to a show; each time I have a show, I am back at the beginning. There are things that get repeated, certain things I go over and over again, but on the whole once a show is done I’m looking for something new, and that needs its own time. There is also a lot of waste in my process, I reject a lot of works. In a way, I’m looking for the ultimate painting so when a show is finished I take it all apart again, like an engine, looking at what’s working and what isn’t.

So from that perspective what worked or didn’t work from your last show?

My last show concentrated on figures and figures in landscapes, and they had a sort of autobiographical connection. There was a theme of marriage and family woven in, with a lot of female figures because I have three daughters. There is always an autobiographical thread in my works, but after that show I felt it was quite saturated and I wanted to get away from it, be a bit more multi-layered. This new group of works is about breaking that figure relationship down and each paintings does that in a completely different way. That hasn’t happened before. Normally there is a stability to the figure and it’s what’s happening around it that is up in the air, but this time the context is quite fixed and it’s the figure that is troubled by it.


You always have a painting from which all the others are unpacked. Which is it this time?
It’s Painter’s Beach Club, whose main figure looks a bit like a shipwrecked painter.

Does it represent your state of mind at the time?
I guess the main figure is an alter ego-ish sort of character. For me, the scene is a metaphor for the artistic process. It’s a bit like what happens when you have just finished a show, you’re happy but you’re also thinking you have to come up with something else next. You seem to have arrived at a place, but you look around and there is more trouble coming at you. In this case a giant wave that is quite static; a kind of frozen moment, held in suspension.


It’s the delight of being a painter, and the anxiety of it too. With creating art, I’m going into the unknown, I’m walking into a sort of landscape that is hard to navigate. It’s takes you away from yourself, beyond your abilities. I’ve always felt it’s quite a good metaphor of life generally. It’s called Painter’s Beach Club because maybe this is where all the painters go, maybe it’s an afterlife sort of place (laughs), quite cool with a drink and a great sunset. But as I just said, I wanted to disrupt the figure in this show and here [pointing to the blue wave] what I’m thinking is does the wave wipe him away, or does it just recede and he is still there? What’s my relationship with that being? I wanted to threaten the stability of the alter-ego status of the figure. In the end, following this painting, the figure as a mirror of myself has been taken apart in the other works. The figures are more transparent and more abstract, you can see through them and they overlap. They are not really the rulers of where they are anymore.

As in your painting Sunset Bathers?
Yes. Here I’m showing more of the process because I wanted to show more vulnerability, although at the same time, like a magician, I don’t want to reveal all the tricks. Here, every single decision is left in the final cut, all the revisions are in there, extra figures have been rubbed out and that is visible, but hopefully some mystery remains in the process. I wanted to make a painting that shows the working out, and as it has gone forward, my latest work is more like that.

Tell me about your creative process?
Quite often it’s a flash of inspiration, ‘Oh that would be good…’ and then that’s what I chase down, those little pops of inspiration. The vast majority of the time it doesn’t work. For the five large-scale paintings in this show there are 39 failures, which have been either painted over or destroyed. I usually always work on two or three pieces at the same time, for practical reasons – like glazing and drying time – but also artistic ones, if you hit against a problem you can come out of that and work on something else.

How long do you spend on each work?It probably averages out at two to three months. It’s not like I’m sitting down in front of the canvas for that long – a lot of the time nothing will be happening on it, it’s just coming in, looking, thinking about what it is.

So how do you decide when it’s finished?That’s become a harder question (laughs). It always used to be very simple, when I was younger there was a clear finish point and I knew what that was. It was all about everything being done to a maximum of finish, technically. As you go on, you let go of the idea of the finishing, because it’s all a bit artificial anyway. Maybe I don’t have the authority that I imagine, maybe it’s not up to me. Somehow, I’m playing with this idea a little bit more.

The works oscillate between abstraction and figuration, often fusing both, but some of the smaller pieces for this show seem to veer more toward abstraction?
These more abstract works are entirely new, so I’m excited about them, but I’ve not entirely learned to talk about them. And I think that’s good because for each show I’m trying to get to something that I don’t understand. There are things that connect them to all of my works and they are in dialogue with some of the bigger works, but I think this is where I’m going next. They’ve been distilled from all the others. I’ve always been interested in tension in painting. For me, the relationship between what is called abstraction and figuration is a tension to be put across in the work. It is the expression itself, because I feel lived experience is all about tension. When my works do both the image and its opposite, I feel they capture something real.

I call these new smaller works Italian Landscapes, but they are really memories of landscape as we went to Italy a couple of time this year. I wanted to tie them with the idea of painting. I’m not trying to capture Italy, there is nothing direct about any of it, I’m trying to capture the complexity of consciousness; that an idea of Italy can be a combination of two areas of Italy completely unrelated, miles apart in time and space, as well as what I bring to that association from elsewhere. It’s more about the emotions and experiences than concrete ideas.

When I was much younger my ideas were quite technical, they had a kind of logic that I wanted to put across, but in the last few years, I’ve thought, actually I’m not interested in ideas, I don’t think ideas are what painting is about, I think painting is the idea, and you want to make a painting from that experience. Painting is about memory, I suppose.

Do you prefer to leave your paintings open to interpretation?
I’ve made very clear, defined paintings before and I feel very at home with things that are forcefully made. Each touch is done in a very specific way, but I like the idea of taking away a certain percentage of the clarity. I’ve reached a point where I feel I want something to be democratic in terms of interpretation. The work is like a screen that is available for projection. What I did and what I felt are just the drivers, the enablers that allow things to happen, but in the end it’s available to anyone. I can say that it’s a crumbling garden wall, but I would not assert that because it’s not, it’s whatever you want it to be.

You are using a lot of different techniques, like trowelling and scraping, staining and stencilling, aerosol spraying, acrylic and oil, inks. Is that always the case?
You could say my paintings are quite maximalist in a way, I get all the instruments out. It’s about the symphony. I’m very interested in the vocabulary of painting and how you can invent, through the material, an equivalent of the world. I’m trying to do that in a symphonic way, I suppose, as though each little part has its own character, its unique role to play in the whole.

As first published on COBOSocial.com