Collecting the Dots - At Home with Kim and Lito Camacho 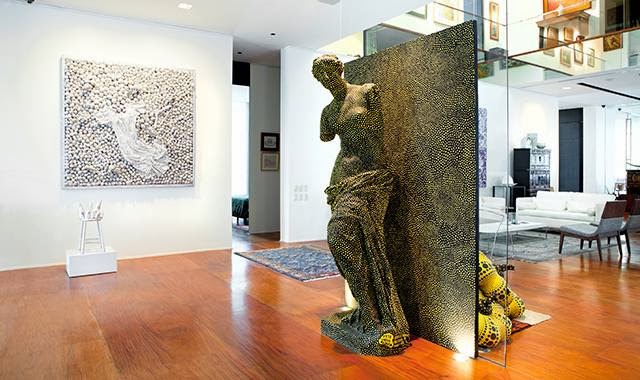 Three days ahead of Christie’s Post-war and Contemporary Art sale in Amsterdam in mid April, Kim Camacho was excited and a bit anxious. She had her heart set on acquiring lot 276, Golden Shoes, 1965, by Yayoi Kusama, a pair that the Japanese avant-garde artist had made for Ann Burton, who had danced in one of Kusama’s Fluxus performance pieces. “I can’t believe those are showing up in Amsterdam of all places,” said the former Sotheby’s representative. “I just cross my fingers and hope someone else hasn’t noticed. I really would like to add those to our collection.”

Someone else had noticed, and Kim had to bid aggressively until the competition finally gave up. “It went for more than double [the presale estimate], but it was well worth it,” she said after the auction. “It’s an iconic subject for Kusama, part of the ‘Accumulations’ series she did in New York. This is the first time that we got one of her works from that period—which is her most expensive—so I’m thrilled, because it rounds out and completes our collection.”

Kim lives and breathes Kusama. Her mobile phone has a small yellow Kusama pumpkin charm dangling from it, and she wears a pair of sunglasses the artist designed for Louis Vuitton. “I’d never bought Louis Vuitton before, but now they know me well,” she said, laughing as she explained that she has bought numerous items from the LV Kusama collection released last year, “often in several colors!”

“It’s become an obsession,” quipped her mild-mannered husband, the former secretary of finance for the Philippines and current vice chairman for Credit Suisse Asia Pacific and country CEO for Credit Suisse Singapore.

The Camachos first met at Harvard Business School in Boston, and later, as they set up their first home in a small Manhattan apartment, they started buying prints to decorate the walls. “At the time prints were all that we could afford, as we were really starting our professional careers, me with Bankers Trust and Kim working for Seagram’s Latin America in New York,” Lito recalled.

When they relocated to Manila in 1981, they quickly became regulars on the local art circuit, attending openings and befriending many of the up-and-coming artists of the time, such as Manuel Baldemor, Mario de Rivera, Charlie Co, and Danny Dalena. Then their focus was on Filipino genre scenes, realistic landscapes, and figurative works. “All of this is an evolution; you buy what you can afford,” Lito said. “At the time, we bought young contemporary artists. In the later part of the ’80s, we moved on to the Filipino masters like Fernando Amorsolo, Hernando Ruiz Ocampo, and Anita Magsaysay-Ho.” Prized in their collection are a 1943 painting done by Magsaysay-Ho prior to her marriage to Robert Ho and simply signed Anita Magsaysay and two small portraits by Amorsolo: Spanish Lady, 1917, and Woman in White, 1926. The latter is “a study for a similar painting that I saw for many years at the central bank of the Philippines, so it is something close to my heart,” Lito explained.

Though the couple is currently based in Singapore, they have been increasingly spending time in Manila, and this is where the bulk of their collection is—in particular all their works by Kusama, which were loaned to the Ayala Museum this summer for a show aptly titled “I Love Kusama.”

Located in a gated community in central Manila, the couple’s 16,000-square-foot home was partly designed around some of the bigger pieces in their collection. Kusama’s Statue of Venus Obliterated by Infinity Nets, 1998, greets visitors as they enter the house after first passing through a large antique door from Rajasthan and crossing a stone-tiled bridge over a pond populated by alligator gars, stingrays, and an albino hammerhead to reach the spacious living room.

The imposing statue is just one of many Kusama works in the living room, which mixes her fine art with her merchandise. There are works by other artists, like an Ai Weiwei sculpture and a Chanel No. 5 bottle by Ma Jun, a rising Chinese artist who recreates everyday objects in traditional porcelain, but the couple’s passion for Kusama and desire for completeness in their collections is clear for all to see.

“I guess you could say we have very eclectic tastes,” said Lito. “We are art lovers, but we’ve also been collecting other things, like antique furniture and Oriental carpets, in an obsessive way. I say obsessive because we are quite methodical in educating ourselves. When we select something it’s not a casual interest; we really study the artist or the subject.”

Juxtaposing contemporary pieces and antiques, the couple arranged a Frank Gehry Wiggle side chair under a 1957 Kusama acrylic and next to a Korean royal cabinet with a few ceramics by Korean artist Young-Sook Park perched on top. Meanwhile, Mario Botta’s Sesto Settee, designed in 1985, offers a place to relax next to a mushroom stool by Kusama. All of this creates a comfortable home with interesting talking points rather than a cold gallery space.

On a coffee table, one can’t help but notice a photo of the Camachos in Kusama’s studio, where they met the artist last year. “The night after I met her I couldn’t sleep—she was so friendly,” said Kim, remembering how privileged they felt.

The couple first fell in love with Kusama’s work in 2004, when they saw “Yayoi Kusama: Eternity-Modernity” at the National Museum of Modern Art in Tokyo, but it wasn’t until they moved to Singapore in 2005 that they bought their first piece, a small “Infinity Net” painting. “I think it was fate,” Lito mused, recalling how an invitation to a Kusama exhibition at a Singapore gallery had arrived at their home addressed to the previous tenant. Intrigued, they decided to attend and quickly snapped up the 1999 acrylic.

“I think it was good timing,” said Kim. “When we started buying her pieces in 2005–2006, she wasn’t actually that well collected. One of the large pieces we have was an item at auction that was unsold. We went to the auction house after­wards.” Kim, who was Sotheby’s representative in the Philippines between 2001 and 2005, admits that her auction house experience has served her well as a collector, giving her an insider’s point of view.

“They are the first generation of admirers of the artist, especially in Asia Pacific,” said Hidenori Ota, founder of Ota Fine Arts in Tokyo, which represents Kusama. Recently the pair acquired a black “Infinity Net” painting from the dealer.

The couple said their older children have also encouraged their passion, particularly their recent interest in Gutai art. Over the last four years, the Camachos have acquired about 30 works by Gutai artists, such as Atsuko Tanaka and Jiro Yoshihara, the founder of the movement. “Again, no one was really looking at them, but now with the Guggenheim show, they’re going to be in demand,” Lito said, referring to the New York exhibition earlier this year.

After 30 years of collecting, the Camachos are “definitely keepers,” Lito said, as they’ve only ever sold two artworks. They plan to pass everything on to their children, who appear to have inherited their parents’ penchant for accumulating art. With a cache of pieces by Roberto Chabet and young Filipino contemporary artists, their older daughter Bea is well on her way to building a serious collection of her own.

For a slideshow of the Camachos' pieces, click here.