Anish Kapoor talks about the Power of Concave Mirrors 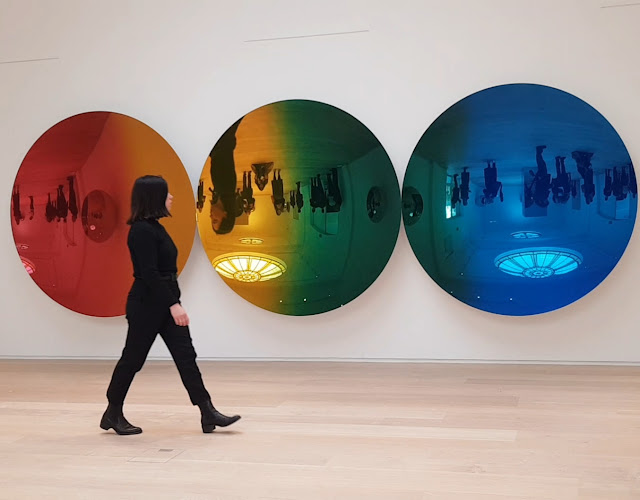 The British architect Sir John Soane (1753‑1837) used strategically placed mirrors to enhance visual perspectives, and so it seems befitting that Anish Kapoor’s hypnotic mirror were chosen as the first artworks to be exhibited in the new art space of Pitzhanger Manor & Gallery, which has just reopened after 3 years of extensive restoration.

The Turner Prize-winning artist often plays with optical illusions that create the impression of infinite depth and his work is the perfect dialogue to Soane’s use of mirrors and domed ceilings. 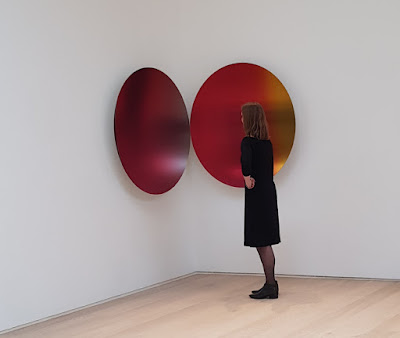 Pitzhanger Manor was designed by Soane and built between 1800 and 1804 in then London’s rural countryside. Today its grounds, Walpole Park, provide an oasis of calm in the busy west London borough of Ealing. The adjoining gallery, where Kapoor’s work is now being shown, was built in the 1930s, on the site of the old house’s kitchen black, it includes architectural elements such as three skylights that uses the same amber glass Soane uses in the manor house.

“I’ve always loved Soane, but I didn’t set out to make an exhibition that was ‘Soane-ian’, I don’t think one can, really. But it’s interesting that certain things overlap almost unintentionally, and I kind of like that. One of them is the amber light [Found in the gallery’s domed skylight]; Soane was obsessed with this warm Italian, I think almost Turner-esque yellow, rather melancholic, light and that’s something that you will see in and around my works. It wasn’t intended, but it’s there,” Kapoor said at the opening.

“The other thing is that for many years, I’ve worked with concave mirror forms of all kind, and concavity induces, or invites interiority which is why I’m interested in it. It turns the world upside down, but it weirdly has a conversation with Soane, and his idea of repeated mirrors, like in the Library here, that create endless reflections. So these things overlap, and all one can do is hopefully make one or two reasonably good works, and make the conversation happen by itself,” he added.

The exhibition presents a range of recent works by Kapoor, including Red to Blue (2016) – three large concave disks, whose colours change as one moves around them, subtly echoing the gallery’s round amber skylights — while the two round forms of Glisten Eclipse (2018), a corner artwork, recalls how Soane would use convex mirrors in the corners of a faceted glass dome to intensify the light in the space below. 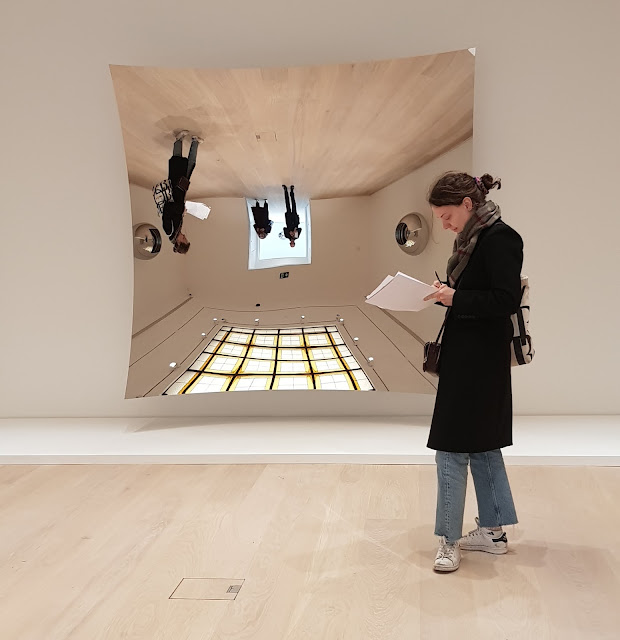 At the centre of the room, the freestanding stainless-steel sculpture Non-Object (Sphere 1998‑2013) at once reflects the entire gallery as one moves around it, while also funnelling visitors’ perspectives beyond the gallery space and towards the manor’s surrounding parkland.

Ahead of the opening, I talked to the British sculptor about his fascination with concave mirrors and their meaning in art practice. [Full piece on COBOSOCIAL]

The use of concave mirrors has become very important in your practice over the last 30 years; what first attracted you to them?
In the late ‘80s, I was making a group of works that were basically concaved forms that were painted with a very, very dark blackish-blue, and what I discovered with them is that they were not void objects, but it was as if the space of these objects filled up with this darkness, and there is a difference. I then made Descent into Limbo [in 1992, a cube-shaped building with a 2.5-metre hole set into the floor, which [the hole] was painted black and it wasn’t about a hole, but a hole full of darkness. I then had the idea somewhere that one could do the same with a mirror, a concaved mirror could fill itself up with ‘mirror-ness’. The convex mirror (or fish eye mirror) has been in art since the Etruscans, more or less, but concaved mirrors were only really an instrument used in sciences as discovered in the 15-16th century and used in telescopes, used as an extension of the lens, but it does the strangest thing. For example in this work, Alice-Square (2017), if it was a painting, one would say that the space of the painting would be from the picture’s surface deep into the interior, that’s the traditional space of a painting. The concave mirror as a painting, if you like, first of all turns the world upside down, but its space is in front of you, and it physically affects your body, it gives you vertigo, making you wonder, ‘Where is the object?’, and that’s what I’m particularly interest in.

So the concave mirror is an exploration of space?
Of space and of course by extension an exploration time, because as you move in front of that mirror something very weird happens; there is the opposite movement, and you’re upside down. Symbolically, that’s anthropic, symbolically that’s an image of death, the upside down figure. So while it’s a game at one level, it also has this quite serious and confounding spatial quality. ‘What am I looking at?’ It’s another void object, which I refer to as the non-object. So in way it’s the opposite of Jacques Lacan’s recognition of self [the French psychoanalyst who developed the “mirror stage” theory, describing when a young child starts to identify with its own image in a mirror]

That’s because you’re not using a flat mirror but a concave one?
Precisely, which is why I refer to many of the works in this show with an ‘Alice’ title, as in Lewis Carroll’s ‘Alice in Wonderland’ falling down the hole. This vertigo of falling into an interior space.

But in ‘Alice in Wonderland’ you go through the mirror and enter another world, is that the same in your work, or is it bouncing back at you? 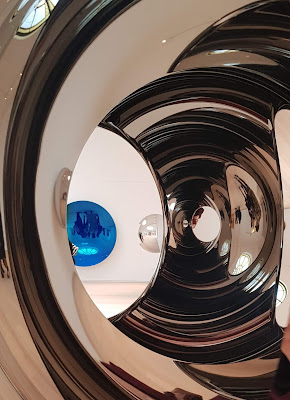 Well, it’s doing all of these things. You are entering another world, but it is also telling you that the world is not what you think it is. The floor is the ceiling, the ceiling is the floor. It gives you this sense of tumbling in. Obviously I’m kind of toying with all these potential ways to think. For example, in Glisten Eclipse [two concave, semi mirrored surfaces set at an angle] I’m trying to say that the space between these two objects is full, it’s full of colour, it’s as if they are taking over each other, one is becoming the other. And then actually there is nothing, it’s just mirrors with one reflecting the other one, but the space is very confusing. It’s as if the object is coming at you and it’s very aggressive.

At first glance, your works are disorientating, but also quite playful, yet, you are also talking about death; that’s a pretty serious matter.
Yes, I hold that it is pretty serious. When Rembrandt is making a self-portrait, he’s looking at himself again and again. There is technique, a way of putting a brush mark. One way of looking at it, it’s a trick, it’s an illusion, the eyes reading a pictorial form. But it doesn’t mean it doesn’t have deep psychological intention. I think we have to be rather thoughtful in our modern era, where we have other ideas about skills. It isn’t just about rending the image, making the image, it’s also about this very complex question of where the self is. ‘Who am I? Is it just a game, or is it a game with deeper intention?’ and I think these things can overlap.