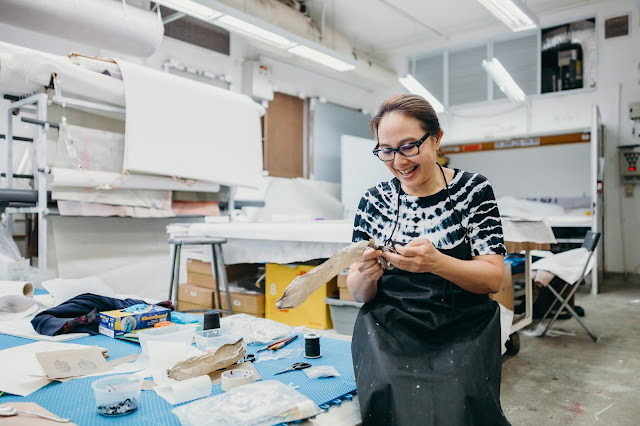 For almost 30 years, Pinaree Sanpitak has explored the poetry of the abstracted female form, in particular the breast, as a symbol of womanhood and femininity in order to raise questions associated with the perception of a women’s role in society. Yet far from being repetitive, her thematic work has remained visually and conceptually fresh as she has moved over time toward more interactive works, seeking to engage all the senses.

“The first breast paintings were deeply personal, reflecting what I was experiencing as a new mother,” she recalls, “but they were really a monument to womanhood, not just motherhood.”

Explaining why she has continued focussing on the varied female form for so long she says, “I’ve kept at it because I feel there is so much more to explore. Each time I use a different material—glass, ceramics, aluminium—they take on a different meaning.”

Much of Sanpitak’s practice can be traced to her formative artistic years in Japan. Instead of taking the usual route of studying art at Silpakorn University, like most Thai artists, Sanpitak won a Japanese government scholarship to study for five years at the School of Fine Arts and Design of Tsukuba University in Japan and these formative years guided her interest in paper, as she learned to texture surfaces using collage, layering and paper wrapping. Her time there also imbued her practice with a zen-like, minimalism aesthetic.

“I think definitely my experience in Japan is embedded in me; it’s my foundation years, so how I look at things, materials and composition starts from there,” Sanpitak says. 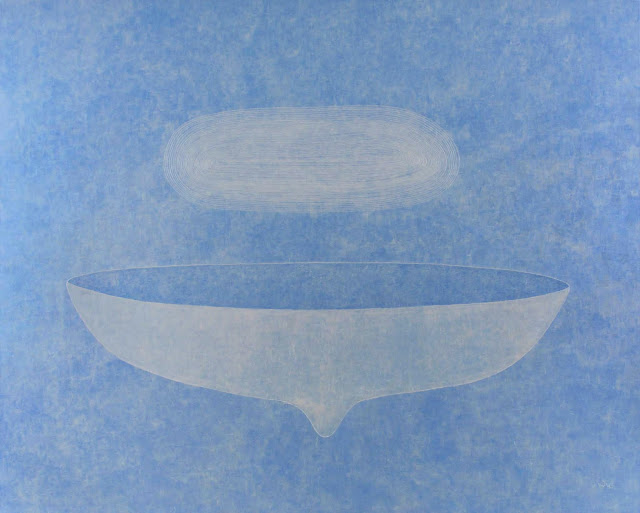 After first focusing on photographic-based collages, and even mulling the idea of becoming a commercial photographer, she transitioned to painting a few years later but goes back to the technique often. “Collage creates textures and layers of thoughts and ideas,” she remarks.

The birth of her only child had a profound effect on the artist’s practice and the imagery she developed then — an abstracted womb with egg-shaped ovaries, a caesarean-scared torso, and breast shapes — has dominated her practice ever since.

While her first ‘breasts’ faced upward like abstracted ancient mountain peaks, her second series of breasts were more elongated and faced downward, “back to reality,” she muses, adding that the breasts are a reflection of her experience after the birth of her son, from the early post-partum elation to the reality of motherhood sinking in later. 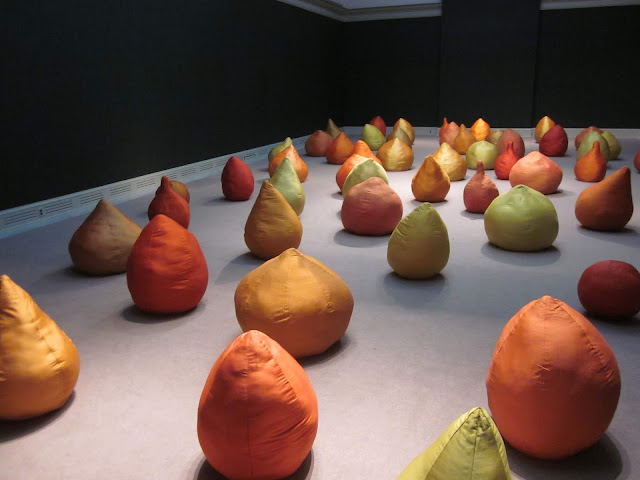 “It came from a very personal viewpoint, and grew with me. In a way, they can be seen as a self-portrait, as a woman looking to her life experiences. At one point I felt more grounded and the breast started to combine the two elements of the sensual and the sacredness: That’s when I coined the term Breast Stupa,” she says.

Stupas (shrines) and offering bowls are key icons of the Buddhist faith, and though the artist says she never intended to make religious references in her work, she has embraced the two icons as abstracted shapes to epitomise the “sacredness of womanhood.”
Her 2001 Breast Stupas featured silk banners where horizontal threads had been very carefully pulled to create the outline of abstracted breasts and with sunlight filtering through the silk, the installation took on a more sacred feel, bringing to mind the religious architecture sanctuary.

Around the same time Sanpitak’s work evolved to become more interactive. A breakthrough came in 2002, with her iconic Noon-nom installation, where she filled a gallery space with over 200 large breast-shaped cushions and playfully invited visitors to recline in them. While alluding humorously to the objectification of women’s breasts, the sea of lightly-coloured cushions satisfied a longing for nurturing and comfort. “I really want to explore the sensory perceptions with my works and this one was about bringing out the sense of touch in the viewers,” she says, adding “I like my artwork to challenge and interact with viewers.” 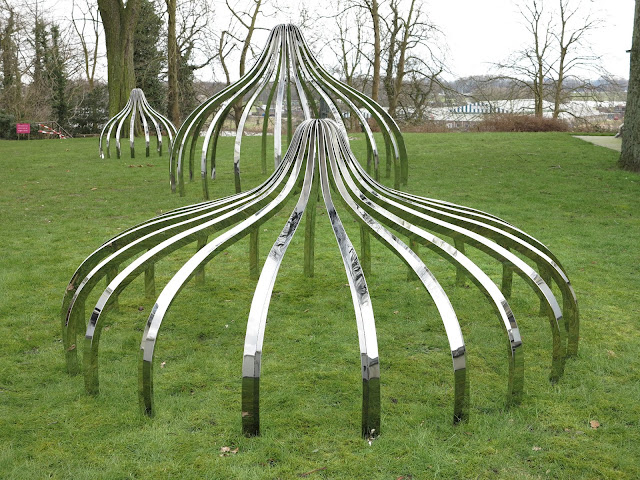 As she explored other senses she has created a kinetic installation of jiggling breast cushions that ‘came alive’ at the sound of people visiting the installation thanks to battery-powered sensors at the bases, and she has also pushed the artistic envelope with her ongoing Breast Stupa Cookery project, where she’s looking to appeal to art lovers’ sense of taste by inviting chefs to create dishes using especially designed breast stupa-shaped cooking moulds and cookie cutters made from glazed stoneware and cast aluminium. The recipes range from Japanese sweets for a tea ceremony in Tokyo, a five-course French dinner for ten to a shared gathering on reed mats and banana leaves eating with hands of food by a Sumatra Batak tribe chef. And while Sanpitak does not handle the food herself she has been documenting the process with video and photography.

Over the years, Sanpitak has simplified the depiction of the female form to basic geometric outlines that have become two recurring motifs: the vessel and the mound. While the vessel, as a receptacle that transports and transfers, alludes to sexuality and nourishment, the mound is a symbol of the inverted abstract breast forms. 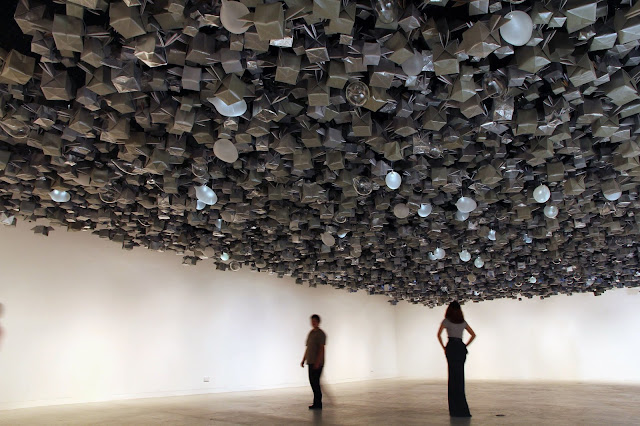 In their most recent incarnation form, the breasts have transformed into weighty globs, reminiscent of teardrops or clouds. These breast clouds, as she calls them, first appeared in her ceiling soundscape installation, Anything Can Break (2011), where she dangled clear glass breast-shaped clouds and origami cubes with tiny wings with the installation coming alive with motion-sensors triggering sounds as visitors move around the space. “I love the contrast between the mathematical precision of the origami and the organic form of the breast clouds,” Sanpitak remarks.

“Her work is often given different labels, such as “feminist,” “Buddhist,” etc., but it resists easy categorizations, keeping an open-ended, all-embracing quality that has the potential to cross divides and speak to everyone. Her practice continuously evolves, incorporating an astounding variety of media and techniques,” remarks New York-based gallerist Tyler Rollins of Tyler Rollins Fine Art, adding he considers Sanpitak to be one of the most important Thai artists of her generation.

“I’ve long found her work particularly compelling because of the unique way she treats the female form motifs, for example by relating the female breast to iconic forms in the natural world in ways that are strikingly different from what we typically see from male artists, while also, and quite daringly, conflating it with the iconic forms of the Buddhist stupa and offering bowl,” he adds.

While she has worked with many materials, she always comes back to paper. “It’s just a beautiful material,” she muses. Sanpitak recently started a residency in Singapore at STPI where she’s experimenting with new techniques, painting with mulberry pulp, embedding paper instead of collaging or layering. “I always come to a residency with an open mind. For this residency I’ve had the idea of doing a paper hammock (as a vessel) and we’re working on how to make it strong enough so you could actually sit in it. It’s still a work in progress, but paper can be very strong, so we’re trying.”