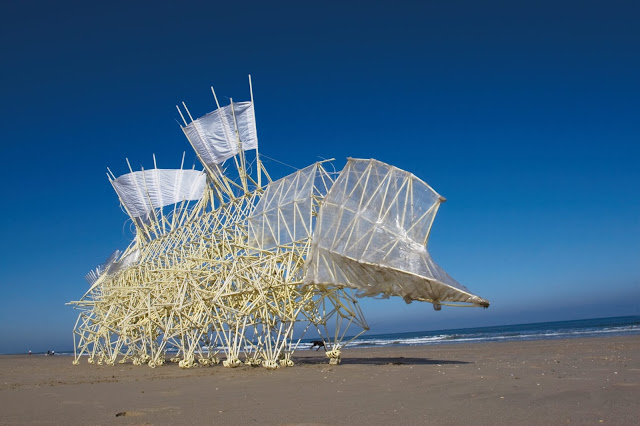 Every spring a new Strandbeest (beach animal in Dutch) is ‘born’ on the northern beaches of Holland. The strange-looking creature with spindly legs and wings on its back will then take its first steps, gently coaxed by its ‘father’, Theo Jansen, and slowly learns to adapt to its seaside environment before becoming dying in the fall.

The Strandbeest is actually a wind-powered kinetic sculpture that blurs the lines between art, engineering, and science. Surprisingly in the hi-tech age of computerized Artificial Intelligence, they are built out of rather mundane materials (PVC tubes, zip ties, recycled plastic bottles) yet the beach animals can not only walk on their own but can also react to their environment having developed over time a sense of self preservation.

Jansen refuses to label his sophisticated kinetic sculptures as artworks and instead refers to them as a fast evolving new species on earth, dividing each generation into time periods and giving them scientific-sounding Latin names.

Wind Walkers: Theo Jansen’s Strandbeests, now on display at the ArtScience Museum until September 30, is a major retrospective of the artist’s work and showcases how the manmade creatures have dramatically evolved, in form and function, over the years to adapt to the challenges of their native environment.

“There are few people working in any field today who embody the intersection of art and science as beautifully as Jansen. For nearly 30 years, he has combined his understanding of science, with his artistic skill to engineer mechanical animals that appear startlingly alive,” says Honor Harger, Executive Director of ArtScience Museum. 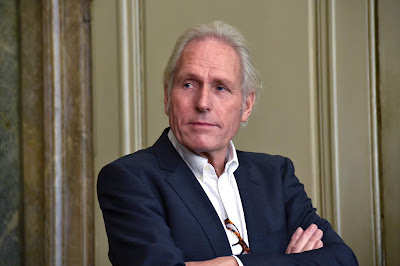 Having studied applied sciences at Delft University of Technology, Jansen did the “hippy thing” and dropped out of school to become an artist in the mid-1970s, first as a landscape painter before moving on fulltime to his kinetic sculptures in the ‘90s. While he had envisaged his first Strandbeests as self-propelled experiments that would roam the beach and push sand to build dunes in order to create natural barriers against rising sea levels, the artist admits he became sidetracked on that initial idea, becoming more fascinated with “the principle of evolution.”

Each year, he experiments on his new creations to help them adapt to their seaside environment. His first beach animal, the Animaris Vulgaris, which sported 28 legs, was not really a success: “It was about two meters long with a very complicated axis, but I was using Sellotape (to hold it together). As a result, it couldn’t even stand on its feet and just lay on its back. When you see that first animal, it looks quite pathetic,” the artist recalls.

But Jansen persevered and the following year, in 1991, his first roaming creation, the Animaris Currens Vulgaris, was stronger thanks to the use of nylon zip ties. 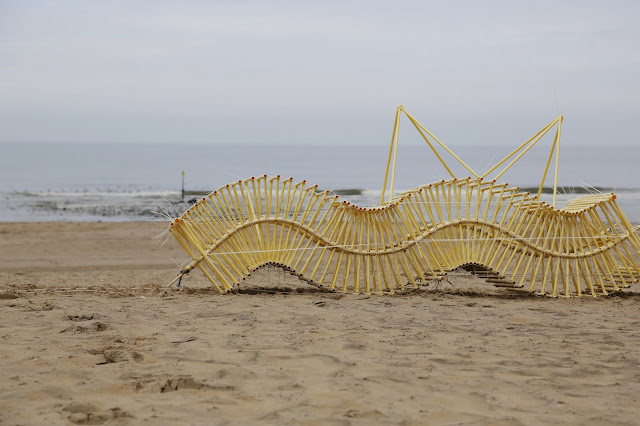 While the Strandbeests has evolved as a species over the years, becoming more sophisticated each time, their ‘bone structure’ remains relatively unchanged. Each animal’s central spine is a wind-powered crankshaft that moves the many legs, each made of 12 small rods that create an eerily lifelike walking movement..  Jansen says he got the idea for the movement one night while unable to sleep, but it took him several months to design the computer program that would help determine the optimal length of each tube to create the ideal movement that would look natural and could cope with the sand.

The artist remarks that while at first glance his animals’ walking style seem very familiar, they are actually not moving like any other animals: “they don’t walk up and down, all the legs actually stay on the same levels while walking.”

“While they don’t walk like animals, some (animals’) walking principles still apply. And one of the key criteria is that a leg should not be in the air for too long, not for beauty, but for mechanical reasons,” he explains adding the Strandbeest's legs are designed to keep the ‘feet’ on the ground for as long as possible to maximize forward propulsion.

Over the years, Jansen has tried to tackle different problems. For example, to allow his beasts to remain mobile when there is no wind, he adds recycled plastic bottles, that he calls a stomach, to store air from bicycle pumps that are activated by small wings up at the front of the animal. The stored compressed air provides potential energy that can later be used by the creature when there is no wind. 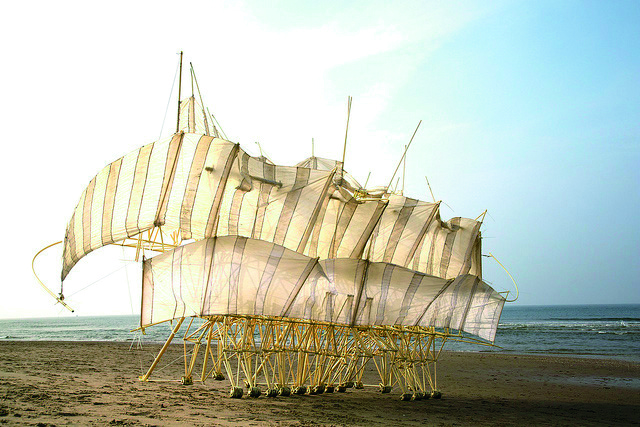 The Animaris Rectus (200 -2008) was able to sense strong winds and had a mechanism to hammer a stake into the sand to keep itself from blowing away, while the in 2012 Animaris Adulari was able to detect water via a nose (an integrate hose that react to being blocked by water) and then reverse direction to head to safer grounds. It also had ‘sweat glands’ - water system that flush out the grains of sand that can otherwise jam its joints

It’s not just the design that changes but also the materials. For example, Jansen has not always used yellow PVC tubes and for a while used steel or wood from discarded pallets to make the animal heavier and bigger, but the beasts could not propel themselves.

Each new Strandbeest retains the successful anatomical feature of its predecessors. Thus the latest beast, the Animaris Omnia sports sails on its back designed to help it tack sideways to the wind like a yacht instead of parallel with the wind, as Jansen believes this could be the solution to his initial idea of having the beast build sand dunes.

For now the Strandbeests remain fragile temperamental creatures, that require constant nurturing and care, but Jansen is dreaming that one day they will roam the beach freely, surviving on their own. “I’m hoping to be able to incorporate all my discoveries for their survival in one beast.”