GREAT WINE, GREAT ART: When vineyards become art destinations in their own right

Earlier this year Château La Coste, a vineyard in the heart of Provence, France inaugurated a permanent installation by Chinese conceptual artist Ai Weiwei. The sinuous work, titled Ruyi Path because of its unusual shape inspired by a Chinese ceremonial scepter, uses cobbles salvaged from the renovation of the Old Port of Marseille to create a new pathway that responds the old Roman routes and dry-stone walls on the property. That same month, the wine estate also inaugurated a new pavilion designer by Renzo Piano with an exhibition of 10 iconic Seascapes by Japanese photographer Hiroshi Sugimoto.

Set 16 km north of Aix-en-Provence amid olive groves and vineyards, Château La Coste boasts an impressive list of architectural structures designed by Pritzker Prize-winners such as Jean Nouvel (the winery), Tadao Ando (an art center), and Frank Gehry (music pavilion), along with works from the who’s who of contemporary art (Tracey Emin, Richard Serra, Sean Scully, to name a few).

The project is the brainchild of Irish businessman Paddy McKillen purchased the estate in 2002 and set to transform it as a 250ha organic winery that would also be an art destination in its own right.

This art and architecture experience has been open to the public since 2011. “Some people come to taste wine and discover art, others come to visit the art and discover wine. Many visit the domain simply because they have heard it is a beautiful destination with a variety of activities. However, one thing is for certain, there is a certain magic about the natural environment here that feeds into the wine,” notes Daniel Kennedy, the manager of the Art and Architecture project at Château La Coste.

Kennedy says about 95% of the projects are made in response to a specific site, but adds “even those placed after the death of an artist are very carefully considered. For the Alexander Calder, Mr. McKillen consulted the artist’s grandson, Sandy Rowler, and the architect Tadao Ando about the placement. For the Jean Prouvé houses, the late architect’s grandson, Nicolas Prouvé collaborated on their restoration and placement.”

Most of the artists spend a long time choosing a location on the property. Andy Goldsworthy spent a month there making ephemeral works before he decided on his permanent Oak Room project: a net-like chamber dug into the earth and lined with woven oak branches, while Lee Ufan spent hours walking in the woods before deciding on a location for his House of Air – “the proximity to the vines, the view of the Alps, and the tranquility of the site seemed to especially appeal to him,” says Kennedy.

“It always feels more special when an artist responds to the environment rather than placing an acquisition. The other aspect is that permanent, in-situ works are here forever. They would be impossible to displace, physically or conceptually,” Kennedy adds.

David Elswood, International Director of Wine at Christie’s, says art and wine are often found together, sometimes on a very dramatic scale and other times in more subtle and low key ways. He notes “the cultural sensitivities needed for the full appreciation of both art and wine clearly have many connections relating to tradition and history alongside the more obvious sensory areas and the two passions complement each other so well."

The relationship between the two has been long established. Back in the 1970s, Robert Mondavi and his wife, Margrit Biever, were already placing sculptures by Beniamino Bufano through their Napa Valley winery at a time when there were few visitors to the wine region. And while it started modestly with Sunday art shows under the arches, the Robert Mondavi Winery has developed a full Wine, Food & the Arts calendar that includes a popular summer music festival, which has featured artists like Ella Fitzgerald and Tony Bennett, a festival of winter classical concerts, and a series of rotating art exhibits in the Vineyard Room has featured Richard Diebenkorn, Wayne Thiebaud, and Nathan Oliveira as well as the work of less well known artists.

A tour of Napa Valley today offers an opportunity to see some very significant artworks. Just 4.2 miles away from the Mondavi estate, Hall St. Helena (and its nearby sister) Hall Rutherford offer the opportunity to view works by internationally acclaimed artists such as François-Xavier Lalanne, Jaume Plensa, Jim Campbell and Nick Cave, while 19 miles in the opposite direction, visitors can see the Hess Art Collection, an impressive collection acquired over five decades by Swiss businessman Donald Hess, who focused on a limited number of artists with whom he had a personal relationship, including Anselm Kiefer, Andy Goldsworthy, and Francis Bacon.

Another of Hess’ vineyards, this time in Argentina, is dedicated to the work of James Turrell, the celebrated American light artist. At 7,218 feet above sea level, the Bodega Colomé vine are some of the highest in the world, affording visitors breathtaking views of the Andean highlands.
Myrtha Steiner, curator of the Hess Art Collection, says Colomé is the perfect place for this museum as “there is no light pollution which could disturb the appearance of the light-installations. It makes the visit a unique experience, a ‘pure’ experience, if I may say so.”

Opened in 2009, the 18,084 square-foot museum is based on a plan created by Turrell himself and features nine of his light installations that represent five decades of his practice. It includes Spread (2003), a 4,000-square-foot walk-in environment of blue light, as well as Unseen Blue (2002), the world’s largest Skyspace which surrounds an interior courtyard and reaches its greatest intensity at sunrise and sunset.

Steiner says the artist carefully “choreographed” how visitors would walk through the various colors of his work: “For Turrell, it is crucial that you start with green, followed by purple, that you first see the glaring light of Stufe (1967), before you enter the darkest piece Slant Range (1989).”

Presenting artworks in a vineyard offers lesser-known artists a different route to the traditional galleries to reach new collectors. For Australian sculptor Ben Carroll, who participated in the Sculpture Prize awarded each year by the Montalto Vineyard in Victoria, Australia, he found it carries a lot of prestige for sculptors: “Once I was aware of how much sculpture collectors focus on that annual collection of 25 to 28 works, I wanted to be part of it.” 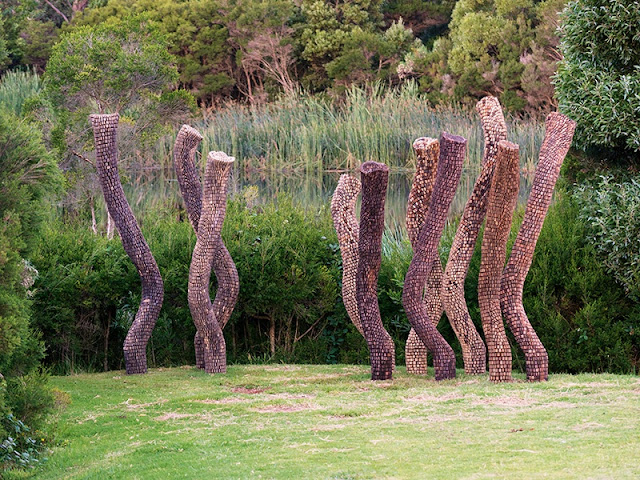 Having enter the competition 5 times, the artist finally won the top price this year for his work The Bush of Ghosts especially created for the Montalto vineyard. “Having spent a lot of time installing and de-installing my works there I have spoken to hundreds of people who have come to the vineyard purely because of the sculpture collection,” he notes.

First launched in 2003, the prize provides an opportunity for the Williams family, owners of the vineyard, to present an annual exhibition to draw visitors, while also adding to its permanent collection that now includes 25 sculptors. “We wanted to encourage visitors to explore the property and we felt that sculpture would interact with the beauty of the setting. Certainly the beauty of the vine is a gorgeous backdrop to sculpture. We do get some people who come for the art experience who may not have otherwise visited, but for many it is the complete experience,” says Heidi Williams. 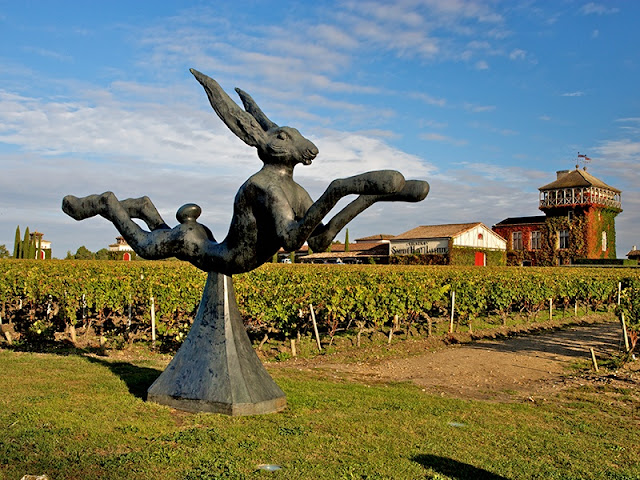 Another vineyard which has been adding to its art collection every year is Château Smith Haut Lafitte, one of the oldest wine properties in Bordeaux. Owner Florence Cathiard and her husband Daniel acquired their first piece, a large bronze by Barry Flanagan in 1995 to celebrate their first great vintage.

Since then the couple has acquired 23 artworks, one for each harvest, including works by Cesar, Wang Du, Jim Dine and Ernesto Neto that are now spread around the chateau’s ground and vineyard, but Cathiard says Flanagan’s bronze remains one of the couple’s favorites.

Watching over the old vines in front of the chateau, the giant leaping hare is an indirect tribute to Bacchus, the Roman God of winemaking. “We loved Barry Flanagan's hares are humanoids, as well as a research on the equilibrium. The hare is also the animal of Dionysus and Bacchus, they are often represented with a (grape) cluster in the mouth. Hares are very important for winemakers: they protect the vineyard from rabbits, which are the scourge of a vineyard!,” she says.