After another year of sharp decline in global art sales, early auction results for 2017 have offered comfort to art professionals. On March 1, Sotheby’s Impressionist, Modern & Art evening sale raised a record $240.8 million, an increase of 78.5% on the equivalent sale last year — thanks largely to a rare masterpiece by Gustav Klimt that achieved $59.3 million and demonstrated there was still pent up market demand for works of extraordinary caliber – prompting the auction house to declare the result was “a statement on the momentum of the global art market in 2017.”

Christie’s evening sale, a day before, also had high energy with notable bidding from Asia. Combined, the auctions achieved high sell through rates of 92% by lot and 96% by value, setting a world auction record for a work by René Magritte.

Yet, there are still some clouds hanging over a market which is often seen as a bellwether of high net worth individuals’ views on the world’s economy. As stock and foreign exchange markets continue their rollercoaster ride amidst the uncertainties related to the new US administration policies, many art players are also waiting to see how art sales could be impacted by China’s latest measures to stem capital outflow, including a vetting of overseas transfers above $5 million.

Edie Hu, Vice President, Art Advisory Specialist at Citi Private Bank, notes that the ongoing tightening of regulation on overseas transfers could have an impact on the market, though she believes it is more likely to affect the lower end than the higher end of the market: "There are many high net worth clients who have a lot of investment outside of China due to business dealings involving overseas operations and partners and they will continue to buy art and real estate. This is more likely to affect the affluent clients."

"I think the auction houses in Hong Kong are bracing themselves for the fact that it's going to get harder for Chinese collectors to get their money out of China. More importantly, it is also harder for them to get consignments because clients are concerned about the current uncertainties and don't want to put their best works on the market. I think everybody is in a cautious wait and see attitude, but there is still some optimism. Art tends to be more about passion investing, and people can sit on their hands for only so long, and then at some point the rational side will lose to the emotional side. They will buy," she adds.

A Break in the Clouds?
After a difficult 2015, when global art sales were estimated to have contracted 7%,  the first annual fall since 2011, the market’s contraction accelerated in 2016: Christie’s total sales dropped 16% to $5.4 billion while Sotheby’s sales contracted 27% to $4.9 billion.

Artprice, working with Chinese partner Artron, recently estimated that global art auction sales were down 22% to $12.5 billion in 2016, reflecting the sharp fall in the number of works put on the market worth more than $10 million. Amid the gloom, China re-emerged as the market’s leading art power in 2016, having briefly ceded that place in 2015 to the United States. China (including Hong Kong) recorded $4.8 billion in auction sales in 2016, representing 38 percent of total world sales, Artprice reported, with traditional calligraphy and painting comprising the vast majority of sales. Meanwhile, Asian buyers continued to flex their muscles internationally: of the top 10 works sold by Sotheby’s in 2016, half were purchased by buyers from the region Asia. Meanwhile, on the business side, Sotheby’s largest investor is now Chinese: Chen Dongsheng, the founder and CEO of Taikang Life Insurance and the founder and president of China Guardian, the world’s fourth biggest auction house, announced in July that he had taken a 13.5% stake.

“So far we haven’t seen much restraint from our Chinese buyers. Last year, 31% of what Christie’s sold worldwide went to Asian buyers, compared with 29% in 2015. And within that thirty-one percent, 80% were Chinese buyers, so at this stage we can’t say we’ve seen any softening in the Asian market,” says Francois Curiel, the Hong Kong-based Chairman of Asia-Pacific at Christie’s, adding cautiously “that said all these (capital control) measures were only announced at the end of last year and it’s still a wait-and-see for their full impact.”

“The Asian buyer is still here and it’s evident from the sales that we see coming in,” adds Talenia Phua Gajardo, founder and CEO of The Artling, an online art platform established in 2013 that focuses primarily on Southeast Asian art.

Hu says that amidst the economic ups and downs, Citi Private Bank is receiving more enquiries about art financing as a way to unlock liquidity from an otherwise illiquid asset: “For qualified clients in Asia who have purchased art and kept them outside of China, this is a way to fund the purchase of more art, consider other investments or pay off higher interest loans. It’s one way of getting the art to work for the client without having to sell. I do expect that there will be more people looking to do more of these deals as it gets harder to move money around."

The dominance of Hong Kong
Recognizing the importance of Asian clients, Sotheby’s and Christies decided to delay their traditional early February London sales to later that month to avoid conflicting with the Chinese New Year. Meanwhile, competition has been heating up in Hong Kong in the last couple of years, with new entrants in the market (Artcurial, Phillips) and a wider offering (comics, western art) that again attests to the financial muscle of Asian collectors, as well as their evolving tastes.

In 2016, Artcurial’s second annual sale focused on comic strips and street art, with the former doing particularly well — two new world records were set and the auction house stated 80% of the lots sold went to buyers in the region. Phillips also launched its inaugural 20th-century and contemporary art and design sale in Asia, and raised HK$151.97 million ($19.6 million), nearly 50% more than the pre-sale estimate, thanks in large part to a 1996 monumental artwork by American Pop artist Roy Lichtenstein, which sold for HK$35.48 million ($4.57 million), exceeding its high estimate. Later this year in Hong Kong, Phillips will auction 200 photographs taken by Andy Warhol during his trip to the city and Mainland China in 1982. Estimates start at HK$50,000.

Undeterred by the increasing competition, Curiel says “I think the more auction houses there are in Hong Kong, the more the art market will grow and the pie will be larger. So personally, I’m delighted. Until now you had New York and London, with Hong Kong a clear number 3, but I think Hong Kong is increasingly closing the gap, in part due to the increasing presence of other auction houses.”

The rise of Hong Kong as a major international art platform is also recognized in the primary market.

David Zwirner, which already has galleries in New York and London and represents over 50 prominent artists and estates, including Donald Judd, Jeff Koons, Oscar Murillo, Yayoi Kusama, Sigmar Polke, and Luc Tuymans, has committed to two floors in the yet to open H Queen building, believing that “Hong Kong is absolutely destined to be a major art hub in the region."

Situated in Central and due to open in the middle of this year, the building is set to transform the way high-end art galleries operate, with an external gondola and curtain wall facade that allows large-scale artworks to be delivered directly to each gallery floor. Other companies that have committed to take space here include Pace Gallery, Pearl Lam Galleries, Tang Contemporary Art, Whitestones Gallery, as well as Seoul Auctions, which has operated in Hong Kong since 2008, but will now have a much more visible presence.

Online Potential
The online market for art sales remains niche, but according to a 2016 report by insurer Hiscox Ltd, it has continue to grow strongly, “indicating that the lower end of the art market could be more resilient to a slowdown than works selling in the mid- to high-end price range.” According to Hiscox, online art market sales reached an estimated $3.27 billion in 2015 and could be worth $9.58 billion by 2020.

Curiel noted that pure online sales at Christie’s only totaled $67.1 million last year, and though this is a small proportion of the auction house’s total $5.4 billion revenue, it increased by 84% year on year. But he addes that the online platform was the point of entry for 33% of Christie’s first time buyers, who typically migrate to traditional auctions over time. The average selling price on the platform last year was $6,047 with the top selling lot being Irregular Curves by Sol LeWitt, which sold for $269,000. 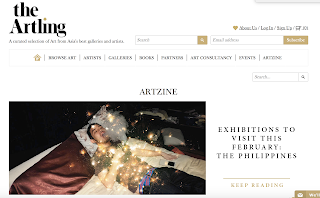 The Singapore-based online art marketplace The Artling currently represents 100 galleries with prices ranging from $100 to half a million and Gajardo says revenues have doubled year on year since the platform started in early 2014, but acknowledges it is “not yet profitable.” This has not been a barrier to expansion though and in January, the e-commerce platform secured $1.7 million in Series A funding from Edipresse Media, a European luxury lifestyle media company, using some of this investment to acquire another online platform based in Hong Kong, ArtShare.com, which helped it expand its database and offering.

“We set up with a view of helping bring Asian art to people outside of Asia, but I also realized that we needed to have a big presence in Chinese art to make it really work. Acquiring Artshare really helped us save time in terms of customer acquisition,” she says.