The Artistry of Secret Watches 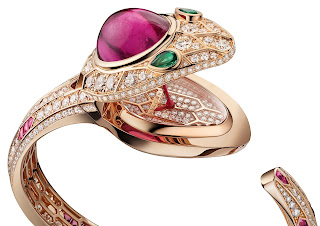 Elizabeth Taylor had an eye for beautiful jewels and over the years amassed some amazing pieces, once declaring “a girl can always have more diamonds.” In 2011, her finest jewels were sold by Christie’s at an evening auction that brought in $115.9 million, setting the tone for a four-day series of sales devoted to the movie icon that achieved record prices for many of the lots. 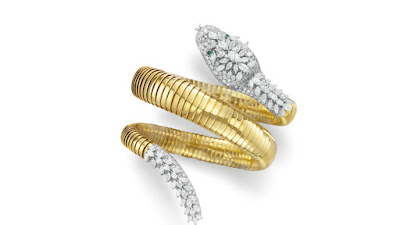 Amongst her most prized possessions sold during the evening sale was a 1961 bejeweled timepiece by Bulgari. Designed as a serpent to coil around the wrist, with its head and tail paved with diamonds and having two hypnotic emerald eyes, a discreet mechanism opens its fierce jaws to reveal a tiny quartz watch. Estimated at $12,000‑15,000, the “secret watch,” so called because the dial is hidden behind a cover, sold for $974,500.

There is a long tradition of secret watches which were first conceived in the 1920s, primarily as a protection for the dial but also as a more discrete way to keep track of the time in society, explains Jonathan Darracott, global head of watches at auction house Bonhams: “Having a dial on view was not to everybody’s taste, especially if you were wearing fine jewelries, and hiding the piece under some diamonds, was a very decent way of having a watch without being perceived of having a watch. The best pieces are first and foremost beautiful pieces of jewelry that happened to have a timepiece inside.”

“All the brands did some, Cartier, Omega, Vacheron Constantin, and of course Jaeger-LeCoultre and the Reverso [first launched in 1931] which is practically a secret watch. I think some of the best ones were made in the 1960s-70s, because they’re very much jewelry pieces with the finest examples being the Bulgari snake watches,” Darracott adds.

Catherine Cariou, heritage director at Van Cleef & Arpels, says that at a time when it might have been considered “indelicate for a lady to look at the time,” the maison deployed a wealth of imagination to find discreet and refined ways to reveal the time, which still seduce today’s aesthetes. Since it created its first secret watches in the 1930s, the maison has continued to create those on a regular basis, most recently unveiling several secret watches at the Salon International de la Haute Horlogerie (SIHH) in January.

Because of the complexity involved with creating a delicate hinged cover, secret watches offer an opportunity for today’s luxury watchmakers to showcase not only their design creativity but the breadth of their technical savoir-faire in gem-setting and high-end jewelry expertise, while also answering the current demand for multi-functionality.

Of late, bejeweled secret watches have regularly grabbed headlines, enjoying a renaissance of sorts, though Chadi Nouri Gruber, head of product management at Audemars Piguet argues they had never really gone out of style. “Many brands have been producing those for years, but very discreetly for specific clients. I just think that brands are now communicating much more about them,” she says.

Eschewing the world of flora and fauna often associated with feminine timepieces, Audemars Piguet went punk with an haute joaillerie cuff watch when it released in 2015 its first secret watch in decades. A sliding cover reveals the time, neatly hidden amongst the edgy multi-pyramid contour that is entirely covered with tiny diamonds using snow-setting, a relatively recent technique that allows the gem-setter to play with stones of different diameters, placing them side by side to create a more organic design.

“Most of our competitors focus really on the romantic and poetic side of high-jewelry creation, which is great because that fits their identity. We wanted to create something that fits ours: we are a rule breaker so we wanted to show we could do high-jewelry creations, that we have the know-how and the craftsmanship, but we can do it in a different way,” Gruber explains.

For its latest creation, unveiled at SIHH 2017, the brand pushed the envelope further with the Diamond Outrage Secret Watch, which has multi-height diamond spikes recalling the Alpine peaks of the Le Brassus region where Audemars Piguet watches are made. For added difficulties, one version of the design uses six different colors of blue sapphire to create a painterly dégradé.

More brands are entering that niche market. During Couture week in Paris in January, the jeweler Giampiero Bodino unveiled for the first time three timepieces, all elaborately embellished secret watches, while Dior Joaillerie also presented its first secret watches, which had been created as part of a jewelry collection dedicated to the opal, a favorite gemstone of its artistic director Victoire de Castellane. The designer used large, beautifully shaped oval opals to hide the dials, which are only revealed when the stone is pivoted. “It just so happens that the bracelets tell time,” the designer commented.

Secret watches appeal to clients who enjoy the intrigue and element of surprise, says Anne-Eva Geffroy, Graff Diamonds’ design director. “By the very nature of their design, the gemstones incorporated and the way in which they are set, each watch is a masterpiece, an extremely special and unique piece,” she says.