Despite predictions of doom and gloom earlier this year, it seems Asian collectors are still having an impact on the art market. They are not to be counted out. 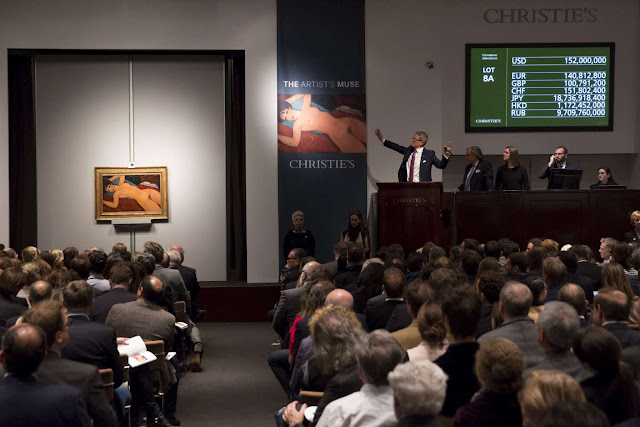 After several years of growth the international art market took a turn for the worse in 2015, and according to the latest TEFAF Art Market Report, released in March, global art sales fell 7 percent last year on an annual basis to $63.8 billion. This was the first decline since 2011 and was led by a sharp fall in the Chinese market, down 23 percent to $11.8 billion, which set the UK above China once more as the second-largest market for art sales in the world, behind the United States.

There were still plenty of headline-grabbing sales though, such as Pablo Picasso’s 1955 painting Les femmes d’Alger (Version ‘O’), which set a new record for contemporary art when it sold for $179.3 million (well above its $140 million estimate and offering a significant return on the $31.9 million it sold for at auction in 1997) or the $170.4 million paid by Shanghai tycoon Liu Yiqian for a Modigliani. However, the art market’s slowdown was evident in overall results. Christie’s reported its first decline in annual sales since 2009, down 5 percent to £4.8 billion ($5.47 billion), though this was still its second highest result in history (the privately-owned company does not release profit numbers), and while Sotheby’s total sales of $6.7 billion in 2015 were flat on the year, the New York-based auction house posted a fourth-quarter net loss of $11.2 million with CEO Tad Smith warning consignments were tighter with buyers “in a wait-and-see mode.”

The slowdown of the world economy may have put a damper on the art market in general, and many Chinese collectors have become rather more cautious with the country’s slowest economic growth in 25 years — at 6.9 percent a year — coupled with the ongoing clampdown on corruption, but a closer look at Christie’s 2015 data shows that the number of Asian buyers continued to increase (up 7 percent) and they now account for 18 percent of global buyers, with buyers from Japan and Singapore up 12 percent and 14 percent respectively. Asian buyers’ spending was up 15 percent in 2015 and contributed to 30 percent of Christie’s total sales, a clear indication that they are willing to spend on big ticket items. “So far we haven’t really seen China slowing down. There are buyers out there if you have the right property at the right price,” says Francois Curiel, Christie’s Chairman for Asia Pacific.

Asian collectors’ appetite for Asian art has remained strong so far this year, as shown by the $130 million worth of sales achieved in March during the 10-day Asia Week New York sales, as well as the strong sales reported during the five-day Art Basel in Hong Kong art fair, plus some impressive headline prices at Sotheby’s Hong Kong auction in April.

In New York, Chinese specialist Eric Zetterquist of Zetterquist Galleries remarked that pessimism about the impact the faltering Chinese economy would have on sales was “completely unwarranted,” stating he had seen many Chinese collectors and dealers, with several new clients amongst the purchasers. James Lally of J.J. Lally & Co., which participated in Asia Week New York with an exhibition of ancient Chinese jade, reported that 80 percent of his gallery’s work at the event had sold, while New York gallery Joan B. Mirviss Ltd., which dedicated a showcase to mizusashi (a Japanese water jar), was 95 percent sold.

Auction houses fared well during Asia Week too. “It was a robust week of sales. The Chinese paintings was over 90 percent sold by lots, the works of art also performed extremely well, and Chinese furniture outperformed expectation. So overall, I felt the market is there and the buyers are there,” says Jonathan Stone, International Head of Asian Art at Christie’s Asia. Stone, who was in New York at the time, noted the presence of numerous collectors from Greater China. “It was clear that at the top end there was a lot of Chinese participation,” he says, adding he remains “cautiously optimistic” for the year: “At a time where there is quite a lot of volatility in different markets, art and in particular blue chip art looks like a very viable and sound place to keep your fund as an alternative asset.”

Sotheby’s Asia CEO, Kevin Ching was also brimming with optimism after the firm’s April auctions in Hong Kong, pointing out that overall, sales were up 17 percent over last spring. “If this is what a correction feels like, then I sure hope we have one in the autumn too,” he quipped after the sales, which brought in $405.5 million, exceeding the pre-auction estimate of $386 million.

“The market, from our perspective, is as strong as last year,” says Jennifer Caroline Ellis, head of marketing and development at Edouard Malingue Gallery in Hong Kong, “There were more young collectors and a higher number of five-figure works sold to collectors, but both emerging and established ones.”

Joanna Strumpf of the Sydney-based Sullivan+Strumpf gallery, which participated in Art Stage Singapore and Art Basel Hong Kong, also reports that in Hong Kong experienced collectors were out in force, “and while there was not the same frenzy as we have seen in previous years, there was no doubt that they were buying.”

“It was a good mix of collectors for us — of the faithful and the new. And we were impressed by the number of younger collectors taking part in this year’s fair,” she says, adding “Having a Mandarin speaker on hand is definitely essential!”

This growing collector interest at a lower price point had also been noted at Art Stage Singapore in January. “The economic slowdown of China has definitely influenced the mood of collectors,” said Pablo Espinel, director of VIP relations at the fair, “However, something very interesting happened, collectors and casual buyers focused on lower price points. I would say the mood was cautiously optimistic; if in past editions a big number of sales were made in the range of S$40,000‑60,000, this year the most popular price range was S$20,000‑25,000. So in that sense, it was very successful for many participating galleries, because they sold more pieces, despite (these being) at lower prices per piece.”

According to Espinel, Asian collectors are still showing nationalistic tendencies, buying from artists they know and from areas they are most familiar with, but the development towards a more integrated art scene and market in the region is evident. “New buyers, especially younger investors-turned-collectors, increasingly cross-buy emerging contemporary Asian and Western artists. I believe that fairs such as Art Basel Hong Kong and Art Stage are the key drivers of this integration,” he says.

Confident in the underlying demand in the region, the organizers of Art Stage Singapore have announced an expansion with the inaugural edition of Art Stage Jakarta (August 5‑7), a new boutique outpost that will bring together about 50 galleries offering contemporary art from across Indonesia.

One of the galleries considering is the Singapore-based Chan Hampe Galleries run by Benjamin Hampe, who also heads the planning and development committee of the Art Galleries Association in Singapore (AGAS), which has 32 members.

"A number of our members have been regularly participating in international art fairs and we've been tracking sales figures and they have been steadily going up," Hampe said. In September 2014, AGAS members participating in KIAF in Korea sold US$401,000 worth of art and $711,000 worth of art at Art Paris in 2015, and had sales totaling $1.15 million at Art Basel Hong Kong this year.

"Business is not bad; business is actually doing well and growing. But in the current environment, yes if your business model is not strong, then there will be some natural attrition, because it's a tough business. You have to work at it through thick and thin and continually grow your client base," Hampe said, adding that the closure of seven galleries at Gillman Barrack in Singapore in the last year, along with that of the Pinacotheque museum should be put into context.

"I don't think it has anything to do with the market. A lot of these organisations appeared because of unnatural intervention. The galleries at Gillman had been incentivized by EDB (Singapore's Economic Development Board) to set up there, but many had not thought through their business model and [researched] the market in the region and what collectors were ready to embrace. A lot of them were never going to work," Hampe said, adding "as for the Pinacotheque, museum audiences are hard won over in Singapore and there is already a glut of museums. It really wasn't well thought out!"

Gillman Barracks will soon get a new tenant. Believing in the strength of the current market in the region, Sullivan+Strumpf will open there in June. “Yes it is true, some of the galleries [at Gillman] have closed there recently, but to be honest galleries close in Sydney all the time too,” Strumpf said.