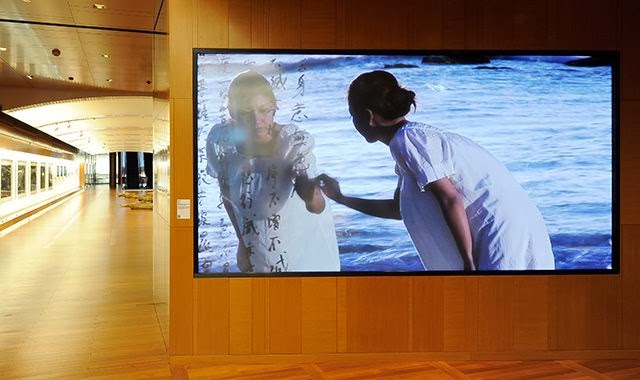 If you have been living on a desert island, you might have missed the results of Yayoi Kusama’s recent collaboration with Louis Vuitton. For everyone else, a tsunami of merchandise ranging from handbags and shoes to beach towels and tiny bikinis has been unveiled in recent months, all bearing Kusama’s well-known infinite polka-dot patterns. At the same time, the windows at Louis Vuitton’s stores worldwide were installed with the avant-garde Japanese artist’s emblematic sculptures, including her biomorphic “nerves” and the flowers of her “Eternal Blooming Flowers in My Mind” series.

Louis Vuitton has enjoyed a long and well-established relationship with artists, especially since Marc Jacobs took over as creative director in 1997 and reached out to artists like Stephen Sprouse, Takashi Murakami, and Richard Prince, among others. But the brand’s commitment to the arts runs much deeper than product tie-ins.

Under the 22-year leadership of Yves Carcelle (who stepped down as CEO in November), Louis Vuitton has taken on the role of a 21st-century mécène, sponsoring exhibitions — for example, the work of Scandinavian design duo Elmgreen & Dragset on the Fourth Plinth of London’s Trafalgar Square — and setting up the Louis Vuitton Foundation for Creation, which will be housed in a museum in Paris designed by Frank Gehry. Currently under construction in the leafy Bois de Boulogne, the $127 million museum is due to open in 2014. It will house the permanent collections of the Louis Vuitton Moët Hennessy group, as well as that of LVMH owner Bernard Arnault, and will also host exhibitions of established and emerging contemporary artists. Suzanne Pagé, a former director of the Musée d’Art Moderne of the City of Paris, is the foundation’s artistic director; Carcelle is vice president.

In Asia, where demand for luxury goods has continued to grow, unaffected by the economic problems of the West, Louis Vuitton has demonstrated its commitment to art by giving up precious Retail space to display and promote it in its new “Maisons,” or flagship boutiques. While LV’s first Espace Louis Vuitton was created in 2006 at its Champs Elysees boutique in Paris, subsequent Espace locations have been established in the Tokyo, Hong Kong, and Singapore flagship boutiques.

The various art exhibitions that open in these spaces every three to four months have sought to present mainly emerging talent to a wider public. At the same time, explains Vita Wong- Kwok, the vice president of cultural development at Louis Vuitton Asia, the exhibitions affirm the brand’s commitment to further pushing the dialogue between luxury and contemporary art.

“Since we opened a year ago in Singapore, we have received a wonderful welcome by the public,” notes Jean- Christophe Tevenin, the general manager at Louis Vuitton Southeast Asia. “Just to give you an idea, we have had more than one million visitors passing through the art space since the opening. Many discover it with surprise, not expecting to see art as they enter the store.”

Tevenin adds that the association with art has always been a key part of the Louis Vuitton culture. The company sees it as an opportunity to enhance customers’ shopping experience and “make the brand more special, more unexpected and ultimately more desirable.”

For young artists such as the Taiwan-based Tsai Charwei — now showing at the Espace in Singapore — the patronage of Louis Vuitton allows them to showcase their work to a broader audience “outside the art world,” as Tsai says, “without commercial considerations.”

Wong-Kwok stresses that the various Espaces do not take on the role of art dealer. While the Louis Vuitton staff is briefed by the presenting artists and curators so they can explain the works to the public, anyone interested in purchasing the works is directed to the artists or the galleries that represent them. “Our major mission is to share art with the public and cultivate this cultural interest, not to sell it,” Wong-Kwok says.

Though support for the arts was very much a personal vision of Carcelle’s, the path he forged is unlikely to change under the new CEO. “It’s a long-term commitment and part of our values,” Tevenin says. “The foundation is an enormous investment and will demonstrate further our commitment to the arts.”

This article was published in the January/February issue of Blouin Artinfo.com Asia Edition.
Luxury Published stories