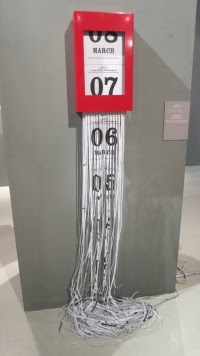 Looking like a long, thin knitted white scarf that is unraveling, “Gregor” by Patrick Frey is actually a clever wall calendar that features the days of the year from 1st January at the bottom to 31st December at the top. As the hours pass, the thread unravels erasing the day slowly until it completely disappears stich by stich. Close by this installation, “Chrono-Shredder” by Susana Hertrich also addresses the passing of time as an art form. Here the days of the year are printed on a single roll of paper and as each day goes by, the paper gets slowly shredded to collect under the installation, showing how time passes and is destroyed. 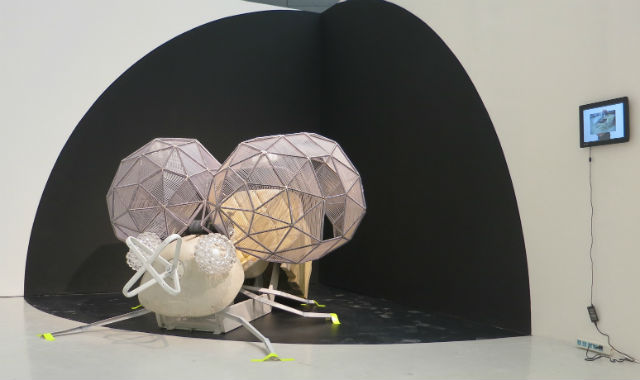 Both works are now on display at “O’clock — time design, design time,” a new exhibition organized by the Milanese Triennale Design Museum at CAFA Art Museum in Beijing which explores the relationship between time and design from an innovative perspective. 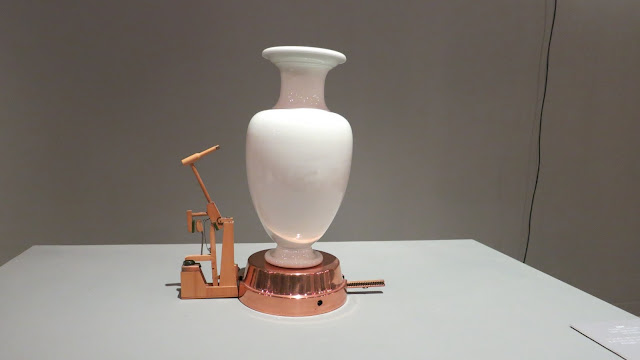 :It’s not a chronological exhibition as we have no historical works related to watchmaking. Instead, we want to show the notion of time from a different point of view,” explainedSilvana Annicchiarico, co-curator from the Triennale Museum.

While many of the works were first presented in a similar exhibition in Milan in 2011, the Beijing edition includes new works by Chinese artists and designers that also show the different approaches that Western and Eastern cultures have to the notion of time. 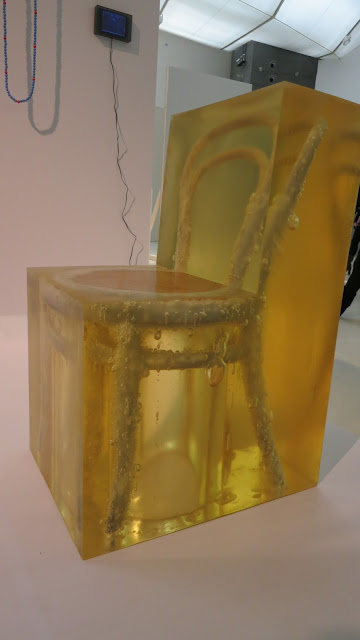 “The idea of time is different across cultures. In Europe and Italy we think about past, present, and future, but in the Chinese language you use only the present and it’s the context that defines the action and whether it is in the past or the future,” Annicchiarico explained, also noting that while in Western cultures time is considered as linear and progressive, in Eastern cultures time was originally perceived as circular, with events not coming in succession, but unfolding cyclically. However of late, with the constant course of society toward the future, Annicchiarico feels the eastern perspective on time is coming closer to the western idea and is more homogeneous. 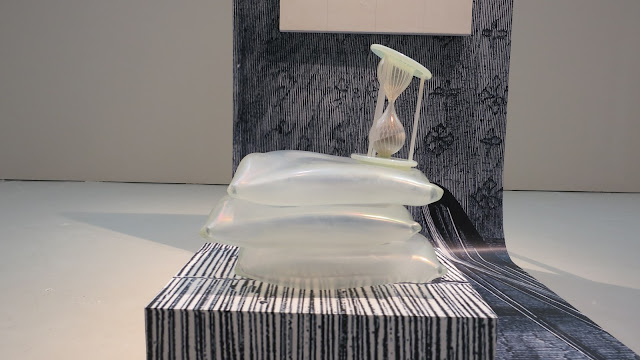 This linear expression of time can be seen in for example Julien Berthier’s “The Clock of a Life of Work,” where the French artist uses four faces that are all interconnected, via wheels and cogs to show the amount of time his imagined subject has left to work while also introducing a notion of “personal” time versus “universal” time, and the work of Jon Velluta, “Time O Time”, an installation of an antique clock linked to a digital display that measures the lifetime of the clock itself. It can also be seen in “7 minutes, 7 years,” by Jia Shanguo, who uses newspapers published for seven different years on the day of his birthday (1974) and juxtaposes them with a more recent electrocardiogram of his heartbeat, thus linking his individual life to the social and historical developments of the time (including the death of Mao Zedong in 1976, which coincided with one of his birthdays). 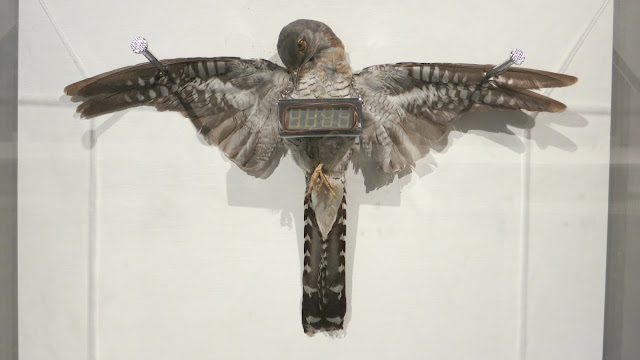 Wang Chunchen, deputy director of curatorial research department of CAFA Art Museum who selected the six Chinese artists involved in the project, found that the Chinese artists had taken a route more anchored in history, looking more into their past and memories, “while the international works are very quiet, the design is quite delicate and some are very conceptual.”

Wang Yudong, for example, created "30'’," which brings together personal objects thus creating a contemporary still life installation that freezes her past. 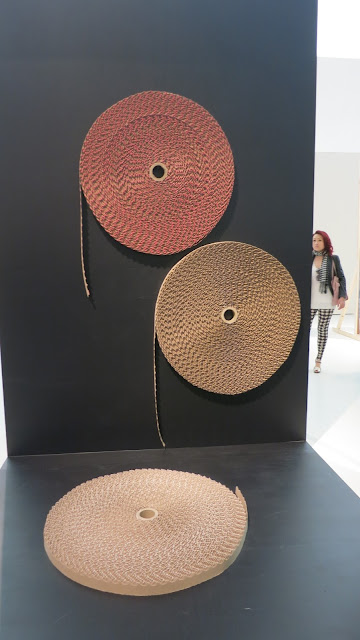 The exhibition has been divided into three main sections which address the notion of travelling in time, the measuring of time, and the representation of time itself. At the entrance, a small display of Officine Panerai watches, the main sponsor of the exhibition, has been specifically arranged by Patricia Urquiola, the designer for the overall exhibition, who said she tried to express the uniqueness of the watches in terms of innovation and overall design quality by creating a series of “worlds” or abstract landscapes in which time is fixed in an unusual instant.

Urquiola, a well-known Spanish designer now based in Milan, has also created an installation piece for the exhibition, "The Time Machine – The Bug," using design pieces she had created forMoroso, such as chairs and lamps. “I took some of my old design pieces, and like a handyman, I created my own time machine. It’s also a metaphor about how designers are always redoing things,” she explained. 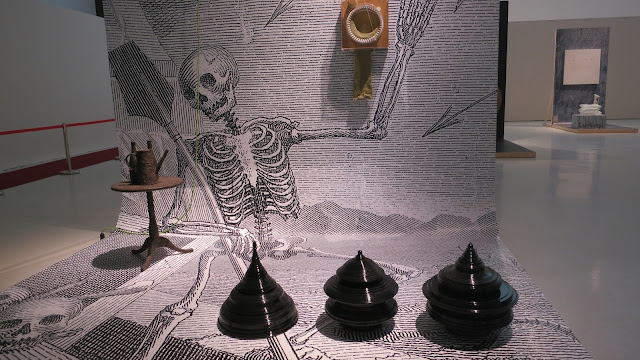 Some designers and artists have tackled the notion of time with humor, for example Michael Sans in his "Cuckoo Clock " used a real cuckoo — one that died of natural causes in 1958 and had been preserved by taxidermy— nailed with its wings outstretched like Christ on the cross, and with the bird no longer contained in a clock it becomes the support for a digital clock. Others have looked at the notion of decay. "The Ephemeral Icon" by Maurizio Montalipresents a plastic chair covered with a fungus that can attack it thereby creating a work that will morph over time.

Taking pride of place near the entrance is a work by Damien Hirst especially created for the first exhibition in Milan, "Beautiful Sunflower Panerai Painting," a spin painting that assembles within a circular space hundreds of dials of Panerai watches, all significantly stripped of their hands. 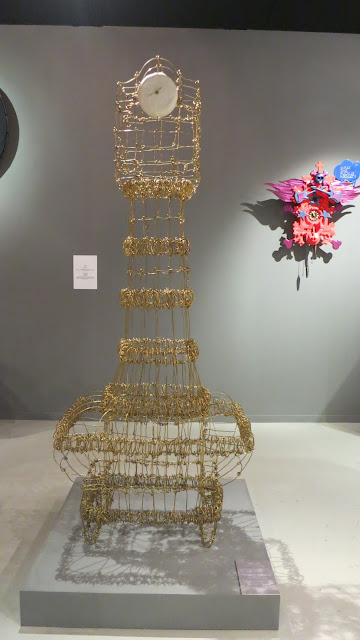 The exhibition path offers visitors two distinct experiences as one can enter through the regular entrance or a “fast track” entrance. The latter derives from the fast lane experience of airports, usually a privileged track. However, here the visitor stressed for time will only be able to survey the exhibition from afar, a smart reference to our contemporary society’s constant “fight against time.”

“It’s really more of a provocation to make people think,” Urquiola said, adding she hopes that by choosing the normal entrance, visitors will “lose their sense of time in the exhibition.”