Published - When Watches Reached the Workingman 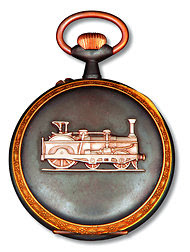 The mass production of steel was one of the greatest technological advances of the late 19th century, leading to the construction in 1883 of the Brooklyn Bridge and in 1889 of the Eiffel Tower, two icons of the Industrial Revolution. Steel also helped to revolutionize the world of watchmaking, allowing the introduction of production lines that cut costs to a point where watches were no longer a preserve of the upper echelons of society.

“Steel Time,” an exhibition of burnished steel watches from the mid-19th to the early 20th centuries, illustrates how, thanks to new technologies, watches became “proletarian” objects.

The show, running at the Forbes Galleries in New York until Sept. 15, features a collection of 200 watches made between 1850 and 1910 and now owned by the Swiss master watchmaker François-Paul Journe.
Because of the blackened, burnished patina of their cases, a finish achieved through a sophisticated oxidation process, they were often known as “gunmetal” watches, but that is a misnomer.

“Gunmetal was a type of bronze that had long been used by gunsmiths for pistol and rifle barrels,” said Jean-Claude Sabrier, a watch expert and consultant who co-wrote the catalogue of the exhibition. “But these watches have no bronze. They’re only in steel which has been chemically treated with a gas or a liquid so that its surface becomes an unalterable black ferrous oxide,” Mr. Sabrier said in a telephone interview from his home near Rouen, France.

Until the mid-19th century, watches were mostly encased in gold, silver or other costly materials, like nickel silver or the brass used in marine chronometers, and were the preserve of an elite.

The advent of sheet steel helped to revolutionize watchmaking. The metal not only was cheap but also could be stamped, which meant factory production lines could turn watches out in large quantities.

In addition to the reduced cost and the possibility of mass production, three socioeconomic factors played a key role in “democratizing” timekeeping, Mr. Sabrier said: the stringent working hours imposed by factory schedules; the development of railroads throughout Europe and the United States; and the changes in warfare toward the turn of the 20th century that made it increasingly necessary for soldiers to be equipped with sturdy, utilitarian timepieces.

The industrial production of a “proletarian watch,” using burnished steel, started around 1880, and production was greatly encouraged by the growth of the French metal industry, which resulted in the development of new methods of production and treatment of steel.

“Most of these steel cases were made in France, and the movement would be Swiss,” Mr. Sabrier said.
Among the major manufacturing houses established in the French and Swiss Jura mountains were Japy, Magnien, Tribaudeau, Parrenin and L’Epée. But the makers are difficult to identify today because the generic term “regulator” often replaced the brand name on the watches, Mr. Sabrier said.

Though steel watches might have been more egalitarian, many were far from plain or simple. Depending on the price, the dials could be of white enamel or embellished in various ways. Some had hour numbers painted on round cartouches of various colors in flinqué enamel — a decorative technique combining guilloche engraving and translucent enameling — or a skeletonized dial. Others incorporated mechanical complications, like chronograph, alarm setting or striking mechanisms, world-time indicators, or repeaters.

“Because the steel case would be quite uniform and somber in color, the watchmakers would try to diversify their offerings with the dials and the movements and their complications,” Georges Rigot, a collector and co-author of the catalogue, said in en e-mail message.

“You can practically find every single complication invented at the time in those watches,” Mr. Rigot said. Each has some technical, decorative or historical detail that may make it special, and attractive to collectors, he added.

Some of the most successful early steel timepieces were “regulators,” watches with diameters of 55 millimeters, or two inches, or more. First intended for employees of the rapidly expanding railroad network, they were soon marketed to members of various other trades — chauffeurs, sailors or military men — whose duties required them to keep to a precise schedule. Depending on the target clientele, the case might be decorated with a locomotive, steamboat, automobile or motorcycle motif.

Their large size made it easy to read the time and, indeed, they were often displayed in plain view in offices open to the public, like those in stations and administrative buildings, Mr. Sabrier said.

Regulators remained in production until after the First World War but were progressively abandoned in favor of less bulky pocket watches and the more practical wristwatch, he added.

Besides being decorated with trade symbols, burnished steel watches were often also customized to appeal to particular segments of the population: For Catholics, there were watches with the instruments of the Passion replacing the numerals; for Freemasons, watches with Masonic symbols; watches with a hammer and sickle for communists or the fleur-de-lis for royalists.

Mr. Rigot said burnished steel watches fell out of favor slowly in the years after World War I, partly because, unlike gold or silver watches, they lacked investment value and also because the more highly priced examples, with complications, were not appreciated by the general public in the hard postwar years.

“Today only the most decorative ones can still be found in markets and auctions, if you have some patience, but they are usually in a very poor state, and while relatively inexpensive to buy, they require expensive restoration to make them work,” he said.


A version of this article appeared in print on September 5, 2012, in The International Herald Tribune.