Published - Fragile, but Full of Protection

Jade has long been prized for its beauty, particularly in China where it is believed to bring good luck and to protect its wearer. “Gold is valuable, jade invaluable,” goes an old Chinese saying.
“If you show a good quality diamond side by side with a good quality jade, the Chinese consumer will definitely pay more attention to the jade,” Carson Chan, Bonhams’ managing director in Asia, said in an interview last month.
The stone, a staple material in fine jewelry, has found little favor with watchmakers, however, because of its fragility. “It is not easy to cut or shape jade evenly into a thin disc, nor is it easy to make small bits such as the indexes without any blemishes,” Mr. Chan said.
“The wastage rate can be quite high,” he added. The problem of brittleness applies both to the rare, hard jadeite and to the softer, more common nephrite jade, he noted.
Still, reflecting the growing importance of the Chinese market, several high-end brands are now incorporating jade in watch dials, and even fashioning it into watch cases.
In 2010, Dior introduced a collection of quartz-movement ladies’ watches with dials in colorful stones, including chrysoprase, turquoise, serpentine and jade, as part of its La Mini D de Dior line. With a small 19-millimeter, or 0.75-inch, face, watches in the Mini D line feature a plain dial without numerals or other markers, in a steel, white, yellow or pink gold case: The bezel and crown are set with 71 diamonds weighing 0.46 carat.
Last year, Piaget added a new line of watches with hard stone dials to its Piaget Polo range. The line includes the 40-millimeter Piaget Polo Jade Dial watch with yellow-gold hour markers and 38 brilliant-cut diamonds, totaling 1.1 carats, set around the bezel. The high-end timepiece is powered by Piaget’s 534P ultrathin automatic caliber, manufactured in-house. 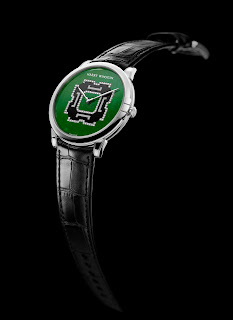 This summer, Harry Winston, Azimuth and The Chinese Timekeeper have latched on to the trend.
Harry Winston recently introduced a collection of limited-edition, Chinese-themed watches to celebrate the opening of its first Shanghai boutique. One of them, the Midnight Limited Edition Shanghai ladies wristwatch, displays the hours and minutes on dials adorned with motifs found in the architecture of traditional “Shikumen” houses in Shanghai that have stone gateways. In the 39-millimeter white-gold version, the geometric decoration, in onyx and tiny brilliant-cut diamonds, is set into a jade dial.
The Imperial Jade Grand Baccarat watch from Azimuth, a watchmaker in Singapore, features a jade dial and a case paved with four carats of diamonds. The watch comes with a baccarat game function activated by a button in the crown.
Christopher Long, a co-founder of Azimuth, said that using jadeite created a double problem for the watchmaker: “First you have to find good quality jade that is of suitable size to make a dial, and then the challenge is to make it thin enough to transform it into a dial.
“Typically, a watch dial is between 0.4 millimeters to 0.8 millimeters thick,” he added. “Most jade will crack at such thickness and if you crack a piece of imperial jade the damage is in five figures.”
Still, the choice of rare, deep-green imperial jade “reflects our passion to make unique watches and hard-to-come-by examples that the collector can feel proud to acquire,” Mr. Long said.
Despite the technical challenges, he said, the company is planning to do a series of jade watches using imperial green jade and white jade, which he believes will particularly appeal to a North Asian clientele: “We’re working on a watch with a big diameter imperial jade at 38 millimeters. The stone is already cut and awaiting the case to be married together. We’re also planning a series of about 40 to 50 pieces of white nephrite jade dial watches with three- hand or one-hand configurations.” 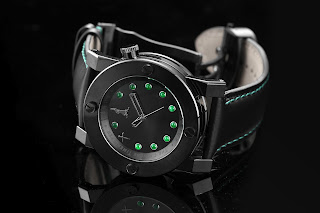 Meanwhile The Chinese Timekeeper, a two-year-old watchmaking venture in Hong Kong, is offering a limited edition of 38 watches, the CTK13-Three Hands Automatic-Jade, featuring Burmese jade dots as hour markers.
Adrien Choux, who founded the brand in 2010, said its vision is to bring together contemporary design aesthetics with Chinese cultural traditions. With that in mind, “we wanted jade to be a full part of our collection,” he said.
The use of jade, even on the modest scale of the hour markers, makes each watch unique, as no two pieces of the stone are identical in color and pattern — a characteristic that should be particularly appealing to customers in search of exclusivity, Mr. Choux said.
If the fragility of jade makes it challenging to work the stone finely enough for a dial, using it for a case might seem to challenge all the stone’s powers of good luck and protection. Just think what one unlucky knock could do.
Still, that has not discouraged the Chinese brand Longio, which showed a timepiece last year at the Baselworld fair with a case and bracelet fashioned from Hotan white jade.
The 46-millimeter Longio Mythos has a black enamel dial decorated with a golden Phoenix and displaying a Swiss-made tourbillon movement in an exposed tourbillon carriage.
Holly Meng, marketing manager at Longio, wrote in an e-mail last month that the watch, which took seven months to make, was not yet for sale, though the company expected it to appeal to many potential buyers.

A version of this article appeared in print on September 5, 2012, in The International Herald Tribune.