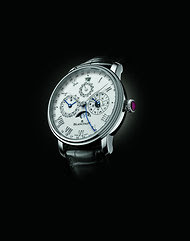 In 2012, the market has been crawling with dragons to celebrate the auspicious Chinese lunar year, but Blancpain has been the brand to go to the next level, offering a watch that displays both Gregorian and traditional Chinese time and dates.

Though China formally adopted the Gregorian calendar at the founding of the republic in 1912, the traditional Chinese zodiac and calendar are often still used — for example, to choose favorable dates for holidays, weddings or other family events. Given the growing importance of the Chinese market, it was only a matter of time before a watch brand would come up with a traditional Chinese calendar on its dial.
The Villeret Traditional Chinese Calendar watch incorporates a new caliber that accommodates the complexities of this double display of hours, days and months.
Each day in the Chinese calendar is divided into 12 “double hours,” each with its own symbol and each also corresponding to one of the 12 zodiac animals, rather than the 24 hours of the Western day.
The dial of the Blancpain watch displays the Chinese hour symbols on a subdial at the 12 o’clock position, with a Chinese hour hand revolving at half-pace on a 24-hour rather than a 12-hour cycle. A neighboring aperture reveals the zodiac sign of the year in progress, while a display at 3 o’clock with a yin-yang symbol at its center depicts the five Chinese elements — wood, fire, earth, metal, and water — and the 10 celestial stems, a system of Chinese ordinals. A moon phase aperture is at 6 o’clock and the traditional Chinese month, date, and leap month are shown on another subdial at 9 o’clock.
While the Gregorian calendar is based on the solar day, the traditional Chinese calendar is lunisolar — a solar year subdivided into lunar cycles of 29.53 days. As a lunar year is approximately 11 days shorter than a solar year, a leap month is added at regular intervals to preserve the match with the cycle of the seasons.
Each month of the Chinese calendar, including leap months, begins on the day of the new moon, so its length is either 29 or 30 days. This means that most years are shorter than the Gregorian calendar year: but a year with a leap month (13 lunar months) is longer, which explains for example why the date of the Chinese New Year varies so much from year to year.
The complexity of Blancpain’s caliber stems both from the amount of information that it displays on the dial and from the complicated nature of the underlying cycles: it can be compared only to that of a perpetual calendar, Blancpain says.
Reactions among Chinese collectors have been mixed. “The dial is impossible to make out and a Chinese calendar is entirely useless,” said Su Jia Xian, a watch collector in Singapore. “But it shows more effort than watches with dragons emblazoned on the dial.”
“I quite like it,” Mr. Su concluded.
Ng Tjeng Jaw, a well-known watch collector in Singapore and the chief moderator of online forums for the watch magazine Revolution, said the watch “is more of a creative idea than a technical innovation.”
Mr. Ng said that, for him, Blancpain had not gone far enough.
“The Chinese calendar system is more complex, with a 60-year cycle with Chinese leap months, as compared to the Gregorian calendar’s four-year cycle,” he said. “It has been my personal wish from Day 1 that a watchmaker or a watch brand will take up the challenge of making a Chinese perpetual calendar, with different Chinese dates, months, and years automatically accounted for.
“The Blancpain piece has a multitude of Chinese calendar indicators on the dial, but it’s not a Chinese perpetual calendar that automatically accounts for the different number of days of the different months,” Mr. Ng said. “The watch has to be manually adjusted to the correct date and month to account for leap months, amongst others.
“For example, the next leap month will be in 2014, where there will be two consecutive ninth months,” he continued. “A true Chinese perpetual calendar would be able to account for this. Instead the watch will move to indicate the 10th Chinese month after the first ninth month in 2014 — when it should stay at the ninth indicator for two months.”
Still, he added, “having said that, the Chinese calendar is so complex, it may be unrealistic to expect a true perpetual calendar.”

A version of this article appeared in print on September 5, 2012, in The International Herald Tribune.