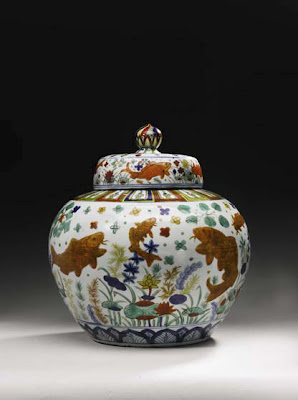 Sotheby’s NY Fine Chinese Ceramics and Works of Art Sale on Sep 11-12 will include an important Wucai ‘Fish’ Jar And Cover, Jiajing Mark And Period.

Fish Jars and covers from the Jiajing period are among the most remarkable imperial porcelain creations of the Ming Dynasty because of their free-spirited Daoist imagery. Traditional wucai jars are decorated with five colors, which is what the term wucai literally means. This jar however, includes a sixth – the rich orange that has been used on the body

The Jiajing Emperor is perhaps best known as a staunch supporter of Daoism. He spared no expense in construction projects and ceremonies associated with Daoist worship. Fish jars such as this one offered a positive, idealized message, that was very different from some more traditional Daoist imagery that featured images of deities, and symbols of immortality. The carefree life of the fish portrayed on these jars stands in stark contrast to the ritualized formality that would have been experienced by the Chinese emperor in his daily life.

This piece is consigned by The Walters Art Museum, Baltimore and is being sold to benefit
the Asian Art acquisitions fund. It is estimated to fetch $500/700,000.