Enameled pocket watches made for the Chinese market in the 18th and 19th centuries have been popular auction items in recent years, strongly supported by interest from Chinese buyers, and prices for many have more than doubled during the period.

Yet in Beijing in December, a record for a pocket watch auctioned in China was established not for a timepiece destined for the Chinese market but for one crafted for a dignitary of the ottoman Empire.


The watch was the Breguet N°1090 Grande Complication, a quarter-repeating model that was dated 1807 and featured a double case with red and gold enamel, and a simple white dial decorated with ancient Arabic numerals. The buyer, at 650,000 Swiss francs, or about $700,000, was the Breguet Museum in Place Vendôme in Paris.

Noting that the watch was in perfect condition, Mr. Breguet said it was also especially valuable because it had been commissioned by Esseyd Ali Effendi, a former Ottoman ambassador to Paris. Mr. Esseyd had become a friend of the French diplomat Charles-Maurice de Talleyrand-Périgord, who had introduced him to the master watchmaker Abraham-Louis Breguet.

“Until now, we have less than 10 Turkish watches in our collection and the N°1090 will be a good complement,” Mr. Breguet said. The watch will go on exhibit in March at the Breguet Museum. Mr. Esseyd had quickly become a big Breguet client, first buying a “minute grande sonnerie” clock watch — a watch that strikes the hours and quarters automatically and repeats the hours and quarters when operated by a push piece — in 1799 and then a long-case regulator in 1801. After returning to the Ottoman court in 1802, he ordered 10 more repeating watches from Breguet, along with several less expensive watches and pocket thermometers, Mr. Breguet said.

“He was the first, along with his friend Stephanaki, an important watch dealer in Istanbul,” to demonstrate to Breguet the potential of the Islamic market for special watches, Mr. Breguet noted in his book “Breguet, Watchmaker since 1775.” He also wrote that watches made for the Ottoman market “had to be gold and enamel, pair-cased, and fitted with white enamel Turkish dials.” 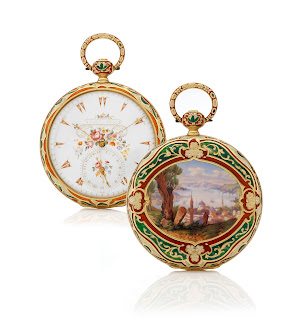 When the Sultan Mahmud II rose to the throne in 1808, he was given several Breguet watches lavishly decorated with precious stones. These now reside in the Topkapi Palace Museum, in Istanbul.

The passion that the Ottoman sultans felt for timepieces was aroused in the 16th century when Western emissaries to the Ottoman court started to present timepieces to curry favor. Religion also played an important role in stimulating interest in watches: Under the tenets of Islam, Ottomans needed to pray five times a day at specific times.

By the early 18th century, the Ottoman Empire’s upper class had developed a taste for European watches, and these watchmakers were more than willing to decorate them according to local tastes, like rich enameling or a star and crescent. Geoffroy Ader, head of Sotheby’s watch department in Europe, said in a telephone interview from Geneva that while pocket watches made for the Ottoman and Chinese markets had similarities in their enameling, Chinese watches used a very specific kind of movement called a Chinese caliber. 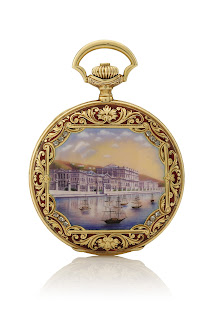 Ottoman watches are also easily recognizable by the ancient Arabic numerals on the dial, Mr. Ader said. The bows, rings used to hang pocket watches or to attach them to a chain, were also sometimes shaped in crescent form, while the decorations often depicted views of the Bosporus or historic figures revered by the Ottomans.

During the early 18th century, Swiss, French and English watchmakers started to settle in the hilltop quarter still known today as Galata. Among them was Isaac Rousseau, the father of the French philosopher Jean-Jacques Rousseau, who wrote of the area in his book “Les Confessions.”

Isaac Rousseau, Mr. Ader said, “was really the first to establish himself there and is probably one of the most important names for that market in the 17th century.” Then in the 18th century, during the golden era of watch production in France, the French watchmakers Julien Le Roy and Jean-Baptiste-André Furet, as well as the British watchmaker Daniel de St. Leu, became important makers for that market, Mr. Ader added. Mr. Le Roy moved from Paris to Constantinople around 1810 to become Breguet’s agent in the Ottoman Empire. He also imported watches made by other Swiss manufacturers and sold to dignitaries in Turkey.

Mr. Ader said that while Breguet dominated the watch market in the Ottoman Empire during the 19th century, there were other Swiss watchmakers specializing in enameled watches for the Ottoman market, including Courvoisier & Cie., Blondel & Melly (renowned for the high quality of its embellished timepieces) and Jacques Vully, whose enameled watches used a specially designed movement with the balance mounted on the top plate. Around the same time, George Prior in London also specialized in the production of watches and clocks for the Turkish market.

At the start of the 20th century, Longines also became an active player in the Turkish market, and a few of its watches have come up at auctions in recent years, Mr. Ader said.

The market for Ottoman pocket watches is now primarily in Geneva and, said Mr. Ader, while there has always been an interest in those pieces, there has been a steady rise in prices over the past three to four years. This is a reflection of the rising purchasing power of Turkish buyers who now often compete with Middle East collectors for those pieces. “I think we can say prices have either doubled or tripled,” Mr. Ader said.

In November 2010, Sotheby’s Geneva sold a rare chronometer watch with date indication made for the Ottoman market by Courvoiser & Cie., circa 1830, for 62,500 francs, well above its estimate of 15,000 to 25,000 francs. The reverse of the exquisite timepiece features an image of the Eyup cemetery along the Golden Horn.

And at Sotheby’s next Geneva sale of “important watches,” set for May 15, the auction house will offer a gold clock watch made circa 1750 for the Ottoman market by Daniel de St. Leu.

This story was published in the IHT ON Feb 21.