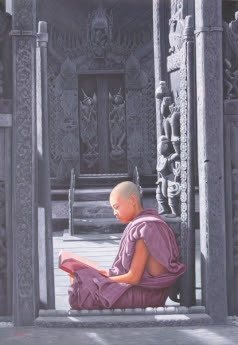 Myanmar's contemporary art scene is pretty slim with only a handful of artists that have managed to attract some international attention. Aung Kyaw Htet, a devout Buddhist who grew up in a small village, is one of them. His upbringing has strongly influenced his art, and granted this may not be the policial commentary some may expect coming out of Myanmar. Yet again, his beautiful paintings of religious life in Myanmar paint a humanity and spirituality which every traveller there can attest is profoundly anchored in society.

The artist just had a small but very nice exhibition opening at ChanHampe Galleries, that presents a cohesive body of works which is showing some evolution for those who have followed him (stronger use of joyful colors.)

Gone are the saffron robe that are usually associated with Burmese monks, instead, Ang presents young novice monks in imaginary mauve dress. His paintings are mainly monotones though he uses bright colors as accent to underline some of the objects important in religious rituals. The faces of his monks and nuns, revealed to the public, are all smilling as if looking at a brighter future. Most of the paintings do not really have a background, just clouds, because the artist says he prefer the attention of the viewer to be on his subject.

There is no denying about the technical abilities of this realist painter, especially in the details of the fabric (you could almost touch the robes) and his ability to capture the light falling on the bold heads. ... though to be fair, his hand's perspective are not always spot on. 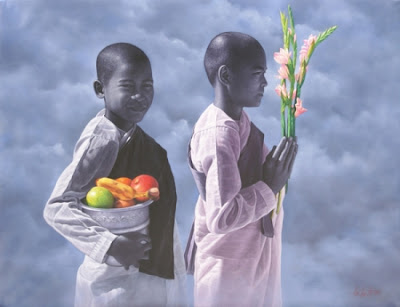 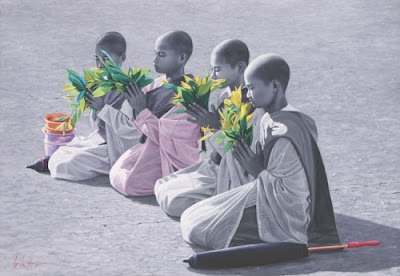 Aung Kyaw Htet was born in Myaungmya and studied at the State School of Fine Arts in Yangon. His paintings are in the museum collections of the National Museum of Myanmar and the National Art Gallery of Malaysia.