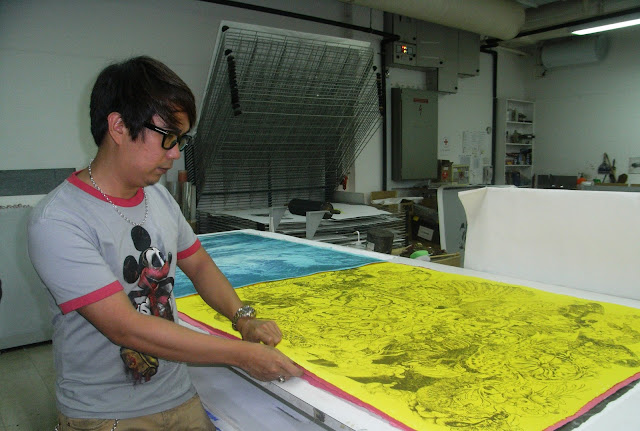 Ronald Ventura was wearing a highly personalized Mickey Mouse T-shirt. By using an airbrush technique similar to the graffiti style in some of his artwork, the Filipino artist had subverted the classic cartoon image with red and black paint, transforming the smiling mouse into something slightly menacing.

This artistic statement is typical of what Mr. Ventura, who has risen to prominence on the Asian contemporary art scene, is known for: well-crafted, complexly layered images and styles that range from hyperrealism to cartoons, graffiti and surrealism. 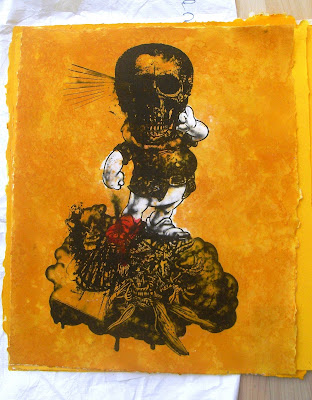 “I try to do something that is inviting to draw the viewer in,” the artist, 38, explained in a recent interview while in Singapore for a residency at the Singapore Tyler Print Institute. “But if you look carefully, you can see something behind. You must look closer to the painting.”

Mr. Ventura checked the details of a large yellow print, at first glance that of a beautiful young woman with flowing hair surrounded by Victorian-style drawings of flora and fauna. But a closer inspection revealed a dangerous world of skulls, bees, eyes and other human organs emerging from a detailed background of human intestines that look like intertwined vines. 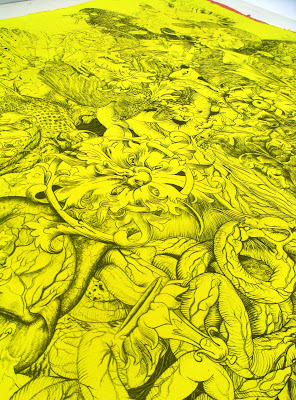 Mr. Ventura, who often subverts commercial images he finds in magazines, said he likes “to layer different realities.” He simultaneously creates a vision of a fantastical world that can be surreal, yet hints at the real dangers that humanity faces: from commercialism to pollution and war.

This year has proved extremely busy for Mr. Ventura, who now holds the auction record for contemporary Southeast Asian art. In April, one of his large graphite, acrylic and oil on canvas works, “Grayground,” sold for 8.42 million Hong Kong dollars, or $1.1 million, at Sotheby’s Hong Kong, surpassing the record set by the Indonesian artist Nyoman Masriadi in 2008.

Over the summer, Mr. Ventura was preparing works for three exhibitions: “Surreal Versus Surrealism in Contemporary Art,” a group exhibition at the Institut Valencia d’Art Modern in Valencia, Spain, which runs through Jan. 8; “Ronald Ventura: A Thousand Islands,” a solo exhibition at Tyler Rollins Fine Arts in New York that closed last month; and his residency at the Singapore Tyler Print Institute, which will culminate in an exhibition next July. He will also have a solo show at Eslite Gallery in Taiwan starting Dec. 3.

“Asian artists have two possibilities: copying Western artists or trying to find their own identity,” said Demitrio Paparoni, the co-curator of “Surreal Versus Surrealism in Contemporary Art.” “Ventura is one of those who are seeking their identities. He doesn’t copy famous Western artists.”

Instead, Mr. Paparoni added, “He gathers and superimposes different languages and styles.” He likened this aspect of Mr. Ventura’s work to a characteristic of postmodernism that developed in the West in the early 1980s and, he said, reached its climax in Matthew Barney’s “Cremaster Cycle” (1994-2002). 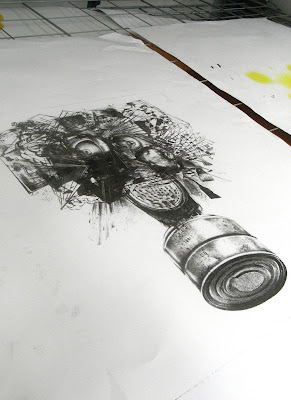 Mr. Ventura is more baroque and more extreme than Mr. Barney was, Mr. Paparoni continued, but, “unlike Barney, he assigns a great importance to manual skills.”

He also noted that Mr. Ventura’s work has strong social and political connotations. “Ventura’s art states that artists must follow principles of social responsibility,” he said. “This, added to his technical skills and his visionary power, makes him interesting to me.”

Mr. Ventura obtained a bachelor’s degree in fine arts from the University of Santo Tomas in Manila in 1993 and immediately took a teaching position there. He admits that he struggled for a while, finding it hard to concentrate on his own work while also teaching.

The strong reception of his first solo exhibition, in 2000, where he showcased his draftsmanship skills by drawing nudes in contrasting tones of dark grays and luminous white, gave him the confidence he needed to quit teaching and concentrate on his practice.

Over the past 10 years, Mr. Ventura’s works have explored the role and place of religion in Filipino society, issues of identity and social stereotypes, consumerism and warfare. He often juxtaposes unexpected images — like a large skull with Disney characters; or a clown and a gas mask — to push viewers to question the realities of modern society.

The skin of his subjects can become an expressive surface, with tattoo drawings adding a new layer of meaning. Over the years he has developed a menagerie of what he calls “zoomanities” — human subjects with animal attributes, and vice versa — based on early 17th-century etchings of humanized animals he once saw.

His most recent works, produced at the Tyler Print Institute, examine how men and women relate to the environment, and how they often destroy it. As an artist, he says, he “can’t ignore what is happening” around him.

For some of the works, he has used triangular orange road signs, immediately identifiable as warnings of danger. On one he added a barely recognizable Disney-esque dwarf cartoon character with a skeleton head on top of mushrooming trash; on another, scared cartoonish eyes peek through a gas mask. Skeletons amid vegetation are a recurrent image, as are explosion clouds that on closer inspection are actually broccoli.

Mr. Ventura says he is especially enjoying working with paper which, because it is a recyclable material, gives another dimension to his works about nature and the environment.

“Actually,” he mused, “I’m more interested in the material and the process than talking about the issues.” 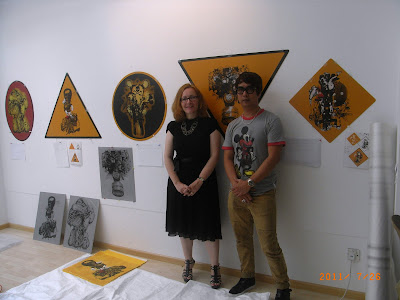 As published in the IHT on Nov 5