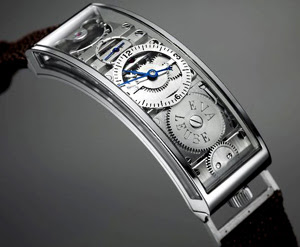 In an industry dominated by men in Switzerland, the independent watchmaker Eva Leube stands out. Based near Sydney, she is also one of the only two women — with Saskia Maaike Bouvier — to have been nominated for membership in the prestigious Académie Horlogère des Créateurs Indépendants, an association set up in 1984 to preserve excellence in mechanical watchmaking at a time when the industry was threatened by the quartz wave.

Mrs. Leube presented her first creation, the elegantly curved “Ari,” at the Baselworld fair earlier this year, and it was preselected for this year’s Geneva Watchmaking Grand Prix in the design category.

The famous independent watch maker Thomas Prescher, for whom Mrs. Leube worked several years ago, had much praised for the watch, which he described as “an outstanding piece of art,” adding, “She managed to marry innovation and beauty.”

Four years in development, the watch presents a bowed movement that places the oscillating balance at the top for all to see. Beneath the balance is a subdial displaying seconds, followed by the simple hours and minutes dial in the center. To allow for the panoramic sapphire windows on the curved sides of the case, she moved the crown to the bottom of the movement by creating a new hand-setting mechanism hidden inside the main plate, traveling from the center of the watch toward its base.

Curved watches were first introduced in the 1910s with Modavo’s Polyplan, which had the movement’s gears on three separate planes enabling the case to slightly follow the curve of the wrist.

In 1935, the American watch maker Gruen introduced the Curvex, capitalizing on the fashion for longer and more curved rectangular watches. But Mrs. Leube’s “baby” goes one step beyond its elders as she has entirely reworked the watch mechanism to allow for a more generous curvature of the case, creating a new kind of “complication.”

“The Polyplan movement consists of three flat planes, which is quite different to my mechanism,” she said. “The arc in my Ari is much more pronounced, so my movement had to be curved all the way around, which means that each wheel’s axle is at an angle to that of the next, the angle being always determined by the distance between two axles.”

In most watch movements, the crown and ratchet wheels, escapement and balance all face down toward the back of the watch, but Mrs. Leube has chosen to place them face-up, toward the viewer, a challenge that required additional intermediate pinions, a reversed escape wheel and a reworked pallet fork. The Ari also features a screw-in locking crown, which is unusual for a manual winding watch, she said.

Mrs. Leube said she wanted the Ari — which will retail for between €76,000 and €93,000, or $105,000 and $128,000, depending on the material for the case — to curve around the wrist more like a bracelet instead of lying flat, but she also admitted that for a new independent watchmaker to even be noticed at Baselworld, where dozens of well-known brands present their creations, one has to present a design that “stands out.”

Born in Germany, Mrs. Leube honed her skills working for Rolex, Ulysse Nardin, and the tourbillon master Thomas Prescher, before deciding to strike out on her own after her move to Australia for personal reasons.

She credits Mr. Prescher with generously sharing all his knowledge and giving her a “new appreciation” for traditional watchmaking.

She admits it would be easier for her to work as an independent watchmaker in Switzerland or Germany, since she could get “outside help” there more readily as well as have access to specialized trade suppliers in cases and dial making.

As it is, she does almost everything herself, including her own milling.

“I build my watches to order, selling directly to the customer,” she said. “The sheer amount of time involved in producing one watch as well as the price will keep this watch very rare and a collector’s item.” The watchmaker is currently working on her first Ari 1 order.

“I am of course also bursting with ideas for new watches,” she said. “Since the Ari with its unique shape received such a fantastic response, I intend over time to keep fitting my new ideas into similar shaped cases.”