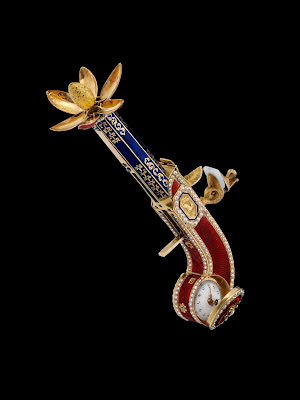 Mechanical curiosities were all the rage in China during the 18th and 19th centuries, as the Qing emperors developed a passion for automaton clocks and pocket watches, and the “Sing Song Merchants,” as European watchmakers were called, were more than happy to encourage that interest.

In the last couple of years, elaborately decorated pocket watches and clocks made especially for the Chinese market have increasingly appeared at auction, attracting strong buying interest from collectors.  More unusual are miniature pieces that were made in the shape of rings or fanciful objects like perfume guns.

On Nov. 30, Christie’s Hong Kong will offer a gold perfume sprinkler in the shape of a flintlock pistol with a concealed watch made for the Chinese market around 1805 by the Geneva-based Moulinié, Bautte & Cie. Decorated with enamel and pearl set, the pistol reveals a tulip flower that sprinkles perfume on the targeted person when the trigger is released. The rare pistol-shaped object carries a presale estimate of $350,000 to $550,000. In April, a similar miniature flintlock pistol created by the same company sold for $482,500 at a Doyle New York auction.

Carson Chan, managing director of Bonhams, says that while these two pieces are appearing within months of each other, they are still extremely rare. “It’s just one of those things,” he said. “If you were actually looking to find such an item, it would be extremely difficult.”

A variant of these pistols featuring an automated singing bird also exists, though these are larger. A pair of such singing bird “pistols” sold in May at Christie’s Hong Kong for a record $5.8 million.

The forthcoming Christie’s sale will also include a rectangular-shaped enameled gold ring watch with automaton, which is attributed to Piguet & Capt, circa 1810, with the enamel depicting a chateau in an idyllic rural landscape. The dial is surmounted by two putti, their pink gold and enamel automaton arms alternately striking the hours and quarters onto two small stylized bells in unison. 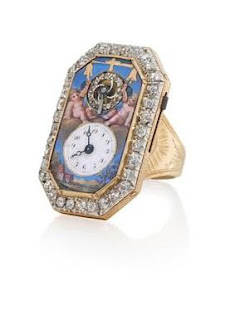 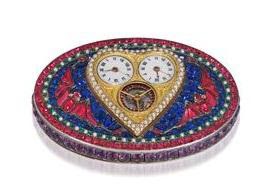 The sale also includes a scarab-form ring watch dating from the 1920s. Beetle or scarab-form watches were highly fashionable in China in the 19th and early 20th centuries, and some are displayed in the Beijing Palace Museum.

Another unusual piece at Christie’s auction is a heart-shaped watch buckle, circa 1770, attributed to James Cox, who was well known for his automata, many of which were made for royal courts around the world. The buckle is decorated with a mosaic of colored glass, which is believed to have been made in the Chinese Imperial Workshop of Guangzhou glassware.

Sam Hines, head of watches for Christie’s Asia, said: “What’s been wonderful in these last couple of years is that because of the strength of the Asian market, specifically the Chinese market, it’s bringing all these great objects to the market. We’re getting a lot more form watches, which are not as wonderful as a pistol, but are still very unique in their own way, and that appeals to Chinese collectors.”

Unusual pieces that have recently appeared at auction include an enamel butterfly-form musical snuff box with watch circa 1820, and a musical lorgnette watch circa 1800, both believed to have been made by Piguet & Meylan, along with watches shaped in the forms of flowers, insects, or even musical instruments, such as a mandolin.

“The prices for these objects had remained very low in the last 20 years, and it’s only really in the last two years that the market for those have really taken off — almost double and triple, even more in some case — mainly because of the interest of Chinese collectors,” Mr. Hines noted.

Not all of these pieces were made for the Chinese market. Mr. Hines says that some were also made for the European market but that Chinese collectors seem to have a particular interest in these form watches now. “Many of those watches were made in the early part of the 19th century,” he said. “They were showpieces people wanted to show off.”

This story first appeared in the IHT