Published - Marking the Time and Passing It by Gambling 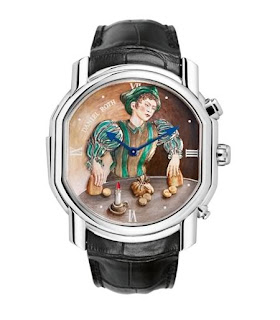 From Corum’s Bubble Royal Flush watch, which has poker cards on its dial, to Daniel Roth’s “Il Giocatore Veneziano,” a minute repeater wristwatch with a 16th-century Venetian dice-playing automaton on its face, watchmakers have in recent years regularly found inspiration in the world of gambling for their designs.  This year, Roger Dubuis introduced its Chronograph La Monégasque Big Number, a limited edition of 128 pieces — part of its La Monégasque men’s collection — with a casino-inspired dial in the classic roulette colors of black, red and green.

Bell & Ross, too, plans to bring its BR01 Casino to market next month — another limited edition, with a carbon finish, inspired by roulette. The BR01 indicates time by three different markers: a ‘0’ numeral on the outer disk displays the hours, a small white roulette ball on the middle disk indicates the minutes and the center of the roulette wheel turns at the rhythm of the seconds. The watch will be sold exclusively in casinos in Monaco, Las Vegas and Macao.


The link between these watches and casinos is mainly cosmetic: but some watchmakers are going a step further, with watches that themselves are mini-casinos.

One of the most innovative pieces introduced this year at Baselworld, a watch and jewelry show, was the Christophe Claret 21 Blackjack, a limited-edition automaton watch that matches grand complications with gambling. It offers three built-in games: dice, roulette and blackjack.


The dice game features a pair of miniature dice, 1.5-millimeters square, or 0.06 inch, in a cage at the 4 o’clock position, visible through a sapphire lens. When shaken in their tiny capsule, they can be used for a game of craps, for example.

For roulette, the watch can be flipped over, whereupon the winding rotor, visible through a glare-proof sapphire crystal, serves as the roulette wheel. Once set in motion, it turns for a few moments before stopping at random. An inlaid arrow on the rotor replaces the traditional ball to mark the winning number.

The Blackjack game, located on the dial, is controlled by a set of push-pieces, or studs, mounted on the case. Players’ cards appear in windows on the lower part of the dial, between 3 o’clock and 9 o’clock. Two are visible, the other two hidden by shutters. On the upper part of the dial are three additional windows for the bank’s cards, one of which is visible while the other two are also hidden by shutters.

As the game starts and the shutters open in turn for the player or dealer, a gong sound is set to strike — a feature visible through a side window at the 2 o’clock position. A push-piece at 9 o’clock arms a spring that triggers simultaneously the seven discs on which the cards are printed. Made of solid gold to impart weight and inertia, each discs rests on a double set of ceramic ball bearings. After a few seconds, they are randomly stopped by a jumper-spring.

At this stage of the game, three cards are face up: two of the player’s cards and one of the dealer’s. To take another card, the player presses a push piece at 8 o’clock, which is engraved with the word “player.” One of the shutters then opens, revealing the card, while a bell rings. Each time a shutter opens, whether for the player or the dealer, the note sounds. When the player’s turn is over, the dealer can take a turn, operating a push piece at 10 o’clock, marked “dealer,” to open one of the shutters.

Timmy Tan, managing editor of the watch magazine TimeWerke, notes that this is not the first time that a watch with a gambling function has been developed. Back in the late 1990s, Franck Muller’s Vegas watch had a central hand that could be sent into a spin by a button built in the crown, and would stop on a random number when released on a roulette-styled subdial.

Gaming functions like the roulette on Franck Muller’s Vegas or Christophe Claret’s 21 Blackjack are not horological complications; they do not enhance the time-telling functions,” Mr. Tan said.

“Nonetheless they do show the ingenuity of the brands,” he said. “In the case of Christophe Claret, the 21 Blackjack is a complex engineering marvel in terms of construction and execution. Moreover, Claret has cleverly incorporated what he is well known for — chiming watches — into the gambling features to add the audio dimension. This by itself, is a clear demonstration of his innovative flair.”

Mr. Tan added, “Another high-end watch with a noteworthy gaming feature is Girard-Perregaux’s high-end complication, the Vintage 1945 Jackpot Tourbillon, with a working miniature slot machine which even chimes after the reel stops.”


In the Vintage 1945 Jackpot Tourbillon, first released in 2007, the top of the dial has three symbol reels that spin while the bottom part of the watch reveals the tourbillon cage. A handle on the right side of the case sets the three reels in motion: each stops randomly displaying one of five symbols, while a hammer strikes a gong. Out of the 125 possible combinations, only one represents the jackpot — three bells in a row. The $625,000 watch comes in a black lacquer box that includes two sets of playing cards in leather card holders, a leather tube holding five dice, and poker chips.

The Singaporean brand Azimuth meanwhile released this year its “Round-1 Baccarat,” commissioned by the Marina Bay Sands resort to reward high rollers. 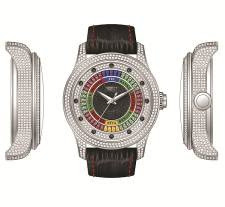 The watch, featuring a baccarat game and the logo of Marina Bay Sands, is the second gambling-inspired watch from Azimuth. Its first was the 2009 SP-1 Mecanique Roulette, with a die-shaped crown activating a ball that randomly stops on one of the numbers on a three-dimensional roulette dial.

“Sales of this Roulette watch have been good because it is our iconic product, and appeals to the more seasoned collectors who appreciate unique designs,” said Azimuth’s co-founder, Christopher Long. “This watch is a fun watch, and a conversation piece, but most probably not for boardroom meetings.” The watch is primarily sold in Singapore, Indonesia and Hong Kong and was also popular in Japan before the earthquake, tsunami and nuclear disaster in March, he said.

Most customers attracted to gambling watches are men, Mr. Long added, typically collectors who already have many other watches and probably people who have played at the casino tables before.
Mr. Tan, however, says these watches are not for hard-core gamblers. “It is more about the brand’s creative flair and these timepieces are an alternative for collectors who want something different that goes beyond telling time,” he said. “These watches make statement pieces and also serve as an entertainment tool.”

While such gambling watches make interesting marketing products, Mr. Tan adds, there are not any clear links between the world of watchmaking and gambling. In fact, it is in the best interests of casino operators to “delink” their customers from time.

“If they can successfully get customers to forget about the time, there will be absolutely no time pressures to leave the addictive gaming tables or slot machines,” he said. “This rightly explains why you will not find wall clocks or any form of time-telling instruments within the confines of casinos.”

As Published in the International Herald Tribune