Published - Inspiration for Special Timepiece in a Wreck 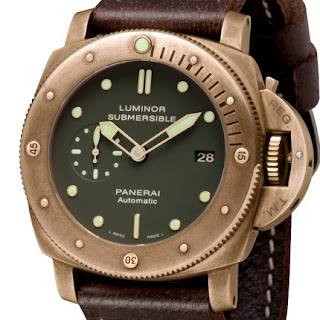 A story about how a vintage yacht inspired the design of the latest Panerai watch. 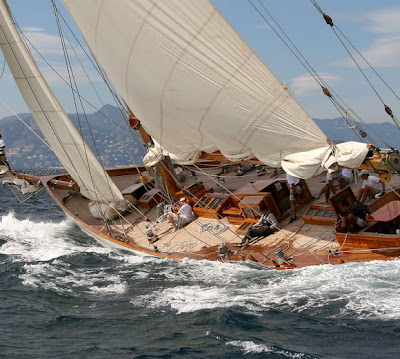 In 2006, Angelo Bonati, chief executive of the watchmaker Officine Panerai and an avid yachtsman, was in Antigua’s English Harbor and on his way to having a drink with friends when he saw an abandoned boat lying among the mangroves.


The hull was in bad shape but he instantly recognized a William Fife design. Fife, a legendary Scottish yacht builder in the late 19th and early 20th centuries, was renowned for the quality and classic lines of his boats, which were recognizable, too, by their trademark stylized Chinese dragon decorative scrollwork.

“I went on board to visit it that day and I immediately thought it could become an ambassador for Panerai,” Mr. Bonati said in a telephone interview. “Two months later, we had acquired the boat.”
The 22-meter, or 72-foot, Bermudan ketch, named the Eilean, had lost its masts. The sax board, the topmost plank, was split and the toe rail, the narrow strip running along the edges of the boat’s deck, was missing. But Panerai sent the ketch back to Italy on a cargo ship and had it restored by a Viareggio shipyard.

Relaunched in 2009, Eilean now occasionally sails in the Panerai Classic Yachts Challenge, an international regatta for classic and vintage yachts that the Florentine watch brand has been sponsoring since 2005.

In a bit of serendipity, making for a good marketing story, Panerai discovered that Eilean had been designed in 1936, the same year that Panerai designed the prototype for its first underwater watch for the Italian Navy.

“Looking through the deck of the boat, I noted that all the metallic fixtures were in bronze and I thought, ‘why don’t we realize a watch inspired by Eilean,’ which is why we made this special edition of 1,000 watches,” Mr. Bonati said. The use of bronze gave the watch, “a special look that makes it very unique and exclusive,” he added.

Bronze is an unusual metal for high-end watchmaking, though not unheard of — it has been used, for example, by Gérald Genta for the Gefica Safari and by the young Italian company Anonimo in several watches. The alloy is resistant to seawater corrosion and offers a high degree of structural strength. But it develops a muted sheen, or patina, with time that can put some people off — though it also gives the watch an aged appearance that others find appealing.

“The changes to the surface of the bronze alloy are front-loaded,” said Su Jia Xian, a watch collector and journalist in Singapore. “Most of the patina occurs early in use because of the oxidation layer which gradually forms. That contrasts with conventional watch metals like steel or gold, which constantly suffer wear and tear with use.”

Mr. Su said he ordered one of the watches because he liked the idea of a patina’s developing with time, giving character to the timepiece: “And also, I’m embarrassed to admit, a Panerai limited edition itself is appealing, since they are usually tough to get.”

The Bronzo has a 47-millimeter, or 1.8-inch, case that is water-resistant to 300 meters. The watch incorporates an unidirectional rotating bezel, which was first introduced on the Egiziano, a model developed in the second half of the 1950s and supplied to the underwater commandos of the Egyptian Navy, in response to that navy’s request for an “indestructible watch.” The innovative feature helped divers to calculate the time of immersion, thanks to a graduated scale with embossed numerical index markers positioned at each of the four cardinal points.

The characteristic Panerai bridge protecting the winding crown, with the lever ensuring the perfect water-resistance of the crown itself, is also made of bronze.

The watch’s automatic P.9000 caliber was designed and produced in the Officine Panerai manufacturing facility in Neuchâtel, Switzerland.

Antonius Kerssenbrock, general manager of Panerai in Southeast Asia, said the company had always liked to use unusual materials, pointing out that in recent years it had introduced a watch in ceramic, the Radiomir 8 Days Ceramica, and another watch incorporating a new composite material, the Luminor Composite Marina 1950 3 Days Automatic, created by an electrochemical process involving the transformation of aluminum.

Mr. Bonati said that reactions to the new bronze watch had been “enthusiastic,” with about 25 percent of the 1,000 limited edition watches committed to Asian retailers, 25 percent to Europe and the rest divided between the Middle East and the United States. “It’s all sold,” he said, referring to preorders by retailers.

Mr. Bonati said the company had no plans to do more bronze watches.    “This was a very special edition. And I think that’s why Panerai is appreciated by collectors,” he said. “Such a watch will not only keep its price but also increase in value.”

As published in the International Herald Tribune