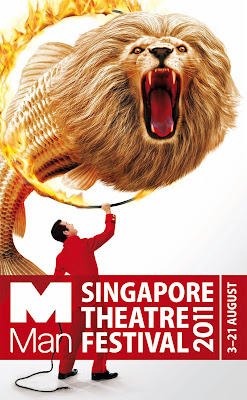 The theater company W!ld Rice has always tried to push the Singapore theater scene’s boundaries by mounting plays that tackle — often humorously — themes regarded as sensitive in the local context, such as homosexuality, religion and politics.  The company’s third Singapore Theatre Festival is no different, including, among other things, a no-holds-barred play on the recent national election; a play about a religious family coming to terms with the revelation that their son, now dead, was homosexual; and another dealing with the issues of religious diversity and acceptance.

All hot-button topics in the local context, according to Ivan Heng, director of the festival and founder of the company.

The Man Singapore Theatre Festival 2011 will run from Aug. 3 to 21, featuring six productions, including a forum theater performance, “This is Home?,” in which members of the public will take a starring role. For the first time, the British alternative investment management company Man Investments, which already sponsors two major literary awards, the Man Booker Prize and the Man Asia Literary Prize, is sponsoring the Singapore festival.

Mr. Heng said the festival this year was featuring “some of the most exciting, challenging and ambitious plays written recently in Singapore.”

“These plays speak of the Singaporean experience in fiercely passionate and powerful ways,” he added. “But far from being navel-gazing, they are very universal and human, reflecting the anxieties and fears, the hopes and dreams of our time.”

The festival includes new stagings of two local plays that explore ethnic tensions: Alfian Sa’at’s “Nadirah” (2009), about a Muslim daughter coming to terms with her mother’s decision to marry a Christian, and Chong Tze Chien’s “Charged” (2010), a whodunit set in an army camp that deals with tensions between ethnic Malays and Chinese.

“These plays have so far only been seen by around 300 people because they were staged in very small venues,” Mr. Heng explained. “Both treat subjects that are rather taboo, or not being discussed the way they should be because of our racial history and sensitivity. I think those are important plays, because they’re about conflict resolution, and by re-staging them, we want to bring them to a bigger audience.”

The festival also prides itself on staging premieres. “We see ourselves primarily as a festival of new writings,” Mr. Heng said. “The idea is really to discover the new, and this year we’ve commissioned four plays.”

“Cooling Off Day,” written by Mr. Sa'at , W!ld Rice’s resident playwright, gives voice to the private thoughts of voters and candidates who took part in Singapore’s general election in May. The rise in new media helped make the election one of the country’s most hotly contested ever. A cooling-off day, a 24-hour period before election day when campaigning was not allowed, was introduced for the first time to allow voters to reflect “calmly” on their decision.

Mr. Sa'at said he wanted to record that particular moment, when Singaporeans seemed to feel more empowered and less frightened and thus were more willing to speak.

“The recent 2011 general election was described as a watershed by many people, and I wanted to see what this meant on the ground,” he said. “Had people’s attitudes toward politics changed? How did they see their future — and their roles as Singaporeans in determining that future?”

He interviewed nearly 50 people with diverse political views before and after the election, starting with the question, “What does your vote mean to you?”

“It often took a while before some respondents could answer the question in depth,” he said. “But it did pave the way to other inquiries, such as what they made of issues such as citizenship, as well as their political rights. Most of the time, though, I found that it was best to let the interviewees speak on whatever topic they were most passionate or concerned about. At times, I knew that it was unrealistic to have every interviewee articulate in exact and certain terms their own political convictions.” Read the whole story in the  IHT