Published - The Plight of Nature 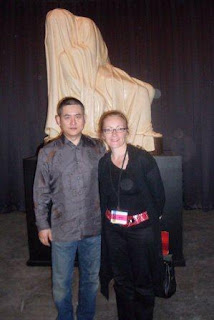 Over the past 20 years, Zeng Fanzhi has made a name for himself in the contemporary art world with his introspective works. His famous Mask series in the 1990s, when he depicted Beijing urbanites wearing white masks to reflect how the members of a new, upwardly mobile generation hide their true selves, brought him international recognition — one painting, Mask Series 1996 No. 6, sold for $9.66 million in May 2008 at Christie’s Hong Kong, a record for a Chinese contemporary artist at the time. Then in the mid-2000s, Mr. Zeng reinvented his style, partly as a result of an injury to his right hand. Holding one or two brushes in his left hand, he started experimenting with chaotic strokes, creating and destroying his images at the same time. He continued with this style even after his hand healed. Now the painter, who is based in Beijing, is on a new creative path, tackling different subjects and artistic disciplines. They were featured in a sculpture and art installation at the Hong Kong Convention Center last week.

Having spent most of his career focusing on the human form and portraits — in his Mask series as well as his “wild strokes” series — the artist has more recently turned his focus to the plight of nature as he explores, in various mediums, mankind’s destructive influences. He presented his first sculptures last year in a show at the Rockbund Art Museum in Shanghai. The exhibition opening this week in Hong Kong, “Being,” will feature 36 works, including some of the sculptures shown at Rockbund as well as several pieces on the theme of animals and nature using his “wild strokes” technique.

Mr. Zeng has visited nature reserves in China to observe species on the verge of extinction, in particular the golden monkey, and he says he is concerned about the ecological degradation and poor animal conservation record in his native country. One of his works in the exhibition, “The Leopard,” was auctioned at Christie’s Hong Kong, and sold for over $4 million. Read the whole story in the  IHT