Published - Gold in all hues 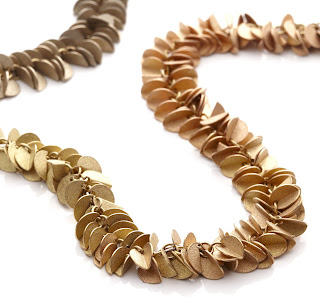 Angie Boothroyd, an American jewelry designer in London, started to experiment with what she calls her “gold recipes” a decade ago, while still a student at the Royal College of Art. Since then she has continued to create jewelry designs using multicolored gold: a recent chameleon necklace sequenced 18 different hues, all in 18-karat metal. “I alloy my own gold in the workshop to achieve different colors of gold, from green, to yellow, to rose,” Ms. Boothroyd said in an e-mail exchange last month. “Yellow gold is what you normally see in the shops, so most people assume that is the natural color. In fact, pure gold is a very deep, orangey yellow but is too soft to be used in jewelry, which is why other metals are added to it to make it more durable.”

Typically these metals are silver and copper. Rose gold, obtained by adding copper, became very popular in the 19th century while white gold, a mix of gold and palladium or silver, became fashionable in the 1920s. Both are now staples of the jewelry trade. But modern jewelers are experimenting with new tints, ranging from purple and blue to chocolate and black. 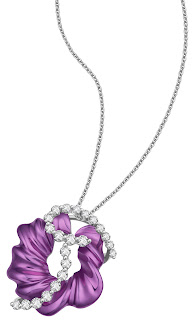 Colored gold can be obtained by a variety of techniques. One way is to create intermetallic compounds by composition with other alloys; another is to form oxides or patinas on the jewelry surface by chemical or thermal treatments, similar to those used to color-cast bronze sculptures; a third is to apply thin surface coatings of other materials. Purple gold, for example, is formed by alloying gold with aluminum; blue gold is formed by alloying gold with either indium or gallium; green gold can be formed by a simple gold-silver alloy. But darker hues of gold like black and chocolate are generated by forming oxides or patinas on the surface.
The London designer Hannah Martin has used black and red gold in her collections for several years. Her black gold jewelry items are 18-karat pure gold coated with a plating of black rhodium. Nathan Morse, the managing director of Hannah Martin, says the intention is to “flip the concept of luxury almost on its head — the notion that only the wearer knows its true worth is the point here.”

The secret of making purple gold is believed to have been first discovered by the ancient Egyptians, but it is still something of a novelty in the jewelry world. “In the past, purple gold could be obtained but was a bit unstable and difficult to perfect,” said Kean Ng, business director at Aspial-Lee Hwa Jewellery in Singapore. Aspial-Lee Hwa was the first company to market purple gold jewelry, in 2000, after buying the patent rights from a professor of metallurgy at Singapore Polytechnic. The color is obtained by mixing 80 percent pure gold with palladium and a secret blend of other metals. Read the whole story in the IHT