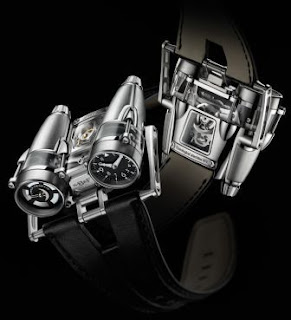 Last year proved to be hard on small independent watch brands, as retailers generally stopped buying on consignment to lower their inventory costs, requiring small watchmakers to wait until a watch was sold to be paid. Max Büsser, founder and chief executive of the independent watchmaker MB&F, found himself traveling around the world to keep sales ticking. This year, things have turned around. Mr. Büsser is still traveling as much as before, but he does not have to deliver the hard sell any more. By introducing four new models in one year, instead of just one as before, increasing the number of retailers he deals with from 12 to 19, and still keeping the overall number of watches the company releases unchanged, MB&F has put the pressure back on retailers. Next year, Mr Büsser plans to increase production to between 165 and 175 pieces, and to open the watchmaker’s first-ever concept store in September with a local partner in Beijing. “One of my dreams will be coming true: that our machines will be sold in an art gallery, because let’s face it, they’re closer to kinetic art than to what is known today as a watch,” he said. “So we are opening a gallery that will present our pieces along with traditional kinetic art. Right now, I’m scouting around the world for artists working in this very rare form of art.” Read the full story in the IHT.