Published - A architectural commune in Singapore 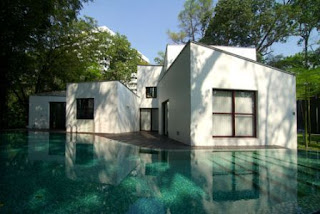 The task was to remodel a colonial-era family home and build five more villas for the family, all without formally subdividing the 120,000-square-foot parcel of land. As difficult as that might be, the project was made even more complicated when six young architects were hired — each one assigned to one of the structures. But rather than descend into a hodgepodge of competing styles, the Lien Villas shows that such a bold proposition is possible. Each house has a distinct architectural identity and its own swimming pool, but all are arranged along a central spine and have a shared garden that links this new architectural commune. The overall construction cost for the project was S$25 million or US$18.3 million. Vincent Lien, one of the owners, says the five new villas, which average 7,000 to 7,500 square feet of living space, are all currently leased to foreigners. But the design concept was shaped by the family’s desire for a compound and the belief that one day its extended members might move in. ‘‘It’s not practical now, but eventually maybe,” Mr Lien says. The property, 51 percent of which is owned by the Lien family and 49 percent by the Lien Foundation, was once the home of the late banker and hotelier Lien Ying Chow, Mr Vincent Lien’s grandfather. His colonial-style house has been converted into a clubhouse for the family to hold meetings, while an extension provides family members living abroad with accommodations when they visit Singapore.  The site, which is located in the leafy Holland Road area, was divided for the project into unequal plots and the family decided to hire young, up-and-coming Singaporean architects, allocating plots to them by way of a draw. Some of the plots are oddly shaped, like the triangular one assigned to Colin Seah, an architect with Ministry of Design. It also has a tembusu tree in the middle that is protected by law. Read my whole story in the IHT today.