From a young age, Helen Britton used art as a form of communication and was soon making jewellery. She still has a cow horn bracelet she made when she was 12 and some earrings made from old beads and fuse wire.

As an artist-jeweller, Britton approaches her practice without distinguishing between forms of creative production: “Some bodies of work contain jewellery, sculpture and drawings; some only one or another — it depends on what I am trying to say.”

Britton is one of the world’s most established artist-jewellers and is known for creating colourful pieces that are just as likely to include recycled plastics as precious stones.

“Preciousness is a construct and culturally driven. All materials are interesting and carry their stories with them,” she says. “I choose the materials because of what they have to say and for no other reason.”

Over the years, she has set blackened silver rings with diamonds and sapphires, or combined silver and pearls with plastic or glass. Her creations are part of jewellery collections of museums such as the Metropolitan Museum of Art in New York and the Stedelijk Museum in Amsterdam.

In her most recent body of work, Arachne’s Garden, Britton played with stones she had collected over her lifetime, such as jasper, agate, garnet, malachite and onyx. Like pictograms constructed in stone, she says the brooches and pendants formed on her table almost by themselves, “while sliding the piles around, animals and insects and flowers appeared, like watching clouds or reading tea leaves”.

Britton’s preference for repurposing materials is deliberate and she notes that with our planet’s resources being constantly depleted, “it is difficult to justify the production of even more things. All I can do is carefully use up what I already have.”

Of her creative process, Britton explains: “It’s hard to say succinctly what I do. Sometimes I don’t know myself. I only know that the work wants to be made, that the selection of materials and choice of art form are dependent on the theme and when a work is finished, I can stand back and see if I have given it enough power and autonomy to live a life in the world without me. That’s the wonder of the creative process. A lot of it remains a mystery even to me.” 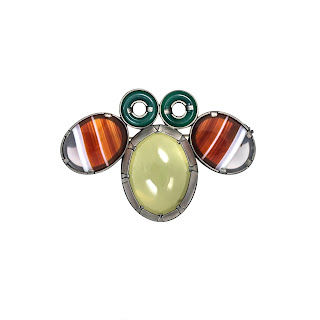 Sienna Patti, who has championed artist- jewellers since founding her gallery in Lenox, Massachusetts, in the late 1990s, remarks that while some artists who create jewellery as an extension of their practice have their work outsourced, Britton creates everything herself. Artist-jewellers like Britton, she points out, “choose to communicate their concept intentionally in a jewellery form as opposed to a painter or sculptor who decides to make jewellery”.

Representing artist-jewellers who create their own pieces has greater impact, as Patti notes: “I think that’s quite different from artists conceiving jewellery but who have them made by someone else. I believe there is some power in objects that are made by those who conceive them.” 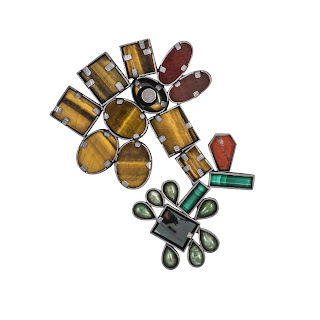 On Patti’s rostra are a wide variety of artist- jewellers like Melanie Bilenker, who adapts the historic art of Victorian memorial hair jewellery to create self-portraits and scenes on small brooches “drawn” using her own hair and set in gold and silver; and MJ Tyson who melts and reshapes existing objects to create miniature sculptures that are intimate portraits of a person’s presence. 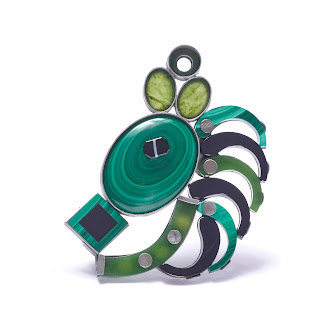 Patti says artist jewellery, like the pieces created by Britton, “are not for someone who wears black day in, day out.” Who would they appeal to, then? Independent women, she shares, “who are comfortable being out in the world with something that might start a conversation with someone. They tend to be slightly older because they are more self-assured.”

First published in A magazine, December 2020