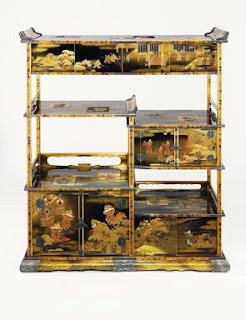 Christie’s NY sale of Japanese and Korean Art on Sep 15 will offer over 250 works, including a group of enamel arts of the Meiji Period, screens, and bronze works, and a private collection of traditional Korean paintings, ceramics and paintings by Korean modern and contemporary artists. Leading the Japanese art sale is a lacquer book cabinet dating from the Meiji Period (late 19th century) and signed Heian Zohiko Sakusei (estimate: $350,000-450,000). This lavish cabinet is a special commission and its elaborate decoration and imagery of musicians and exotic dances with bugaku drums and curtained enclosures evokes court life. The palace is shown at the top of the cabinet, the pond and boat with musicians on the bottom, while the young butterfly dancers appear on poem squares on the side of the cabinet. Additional highlights of the Arts of the Meiji Period include a large cloisonné-enamel vase and a pair of inlaid-bronze vases. The sale will also include a massive, reticulated gilt-bronze hanging lantern, Momoyama Period (late 16th-early 17th century) (estimate: $300,000-400,000). Few such hexagonal metalwork lanterns have survived. 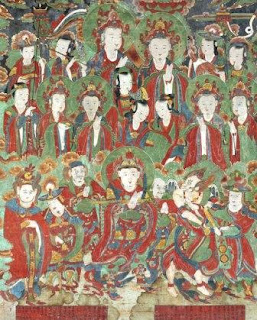 The Korean portion of the sale includes an eight-panel silk screen commemorating the royal celebration banquet of the 50th birthday of Emperor Gojong, Joseon Dynasty (1901), a hero of Korean nationalism (estimate: $300,000-350,000). The paintings on the panels illustrate seating arrangement, food, drinks, musical instruments, flowers, costumes, etc and may be the last example of a Korean royal celebratory banquet (jinyeon) screen ever produced.  Christie’s will also offer over 40 works from The Jerry Lee Musslewhite Collection of Korean Art. The late American collector had a keen appreciation for Korean Art from the early 1960s during his post as Director of the Crafts shop at the U.S. Army military base in Daegu and he assembled one of the largest collections of Joseon Buddhist paintings outside of Korea such as Assembled Deities, 1812, a hanging silk scroll (estimate: $15,000-20,000).