In Conversation With Michelle Chong 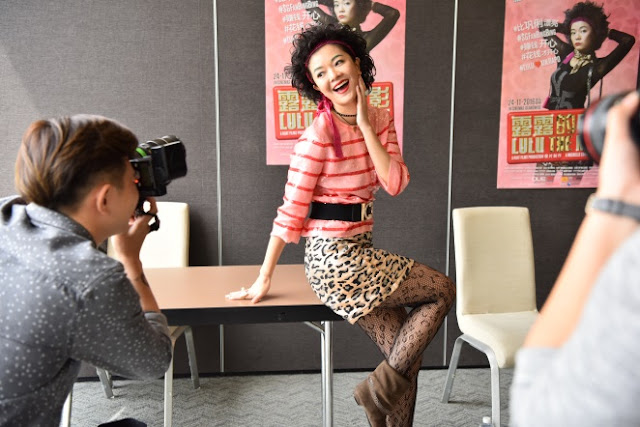 She’s back! Lulu, the KTV hostess character created by Michelle Chong for the popular TV show "The Noose," is making her debut on the big screen and she has lost none of her sassiness and grit.

Three years in the making, “Lulu the Movie” is Michelle's third feature film as a director, and has proven a labor of love seeing her get involved in every step of the production process.

Shot as a “mockumentary” across Singapore, Shanghai and London, the film contextualises the story of the beloved flamboyant character, providing background including her reasons for coming to Singapore (to meet her online boyfriend), her rise to stardom, battling preconceptions and prejudice against her ‘unique’ fashion sense (short skirts, leopard prints and bouffant hair) and her often barely understandable English.

Here are extract from our conversation:

Where did you first find the inspiration for this character?
She's not really inspired by anyone I know. I watched a lot of TV when I was young and she’s more perhaps a stereotype of nightclub hostesses, the kind that was portrayed in clichéd Chinese drama series 20 years ago.  Lulu's look might be dated but her personality is very relevant in today's society — entrepreneurial, determined, vivacious, ambitious, but ultimately a good-hearted PRC in a foreign country.

Why were you interested in reprising the role?
There are always amazing stories in the news of PRCs doing unbelievable things and I thought maybe I can tell a story from a PRC's point of view. On the surface, Lulu looks like a typical loud and garish Chinese lady who cuts queues and pilfers from airplane toilets but she has proven to be rather likable and endearing, too.

What were the main challenges of directing and starring in this film?
Stepping out of my comfort zone and walking around in London in very loud and outlandish get-ups and getting people to talk to me in front of the camera when I clearly do not look or sound like a fashion host, even though I claim to be one. When I came back to Singapore, a friend asked me if I had been in London recently. Apparently, I had asked one of his friends for directions when taking the Tube and his friend messaged him: "Some Chinese tourist with big hair just asked me for directions but she really looks like your friend Michelle." His friend has been away for years and doesn't know Lulu!

The film takes the form of a mockumentary that must have created other opportunities for unexpected funny unscripted moments?
When I was in Shanghai, I asked a Caucasian tourist, "Do you speaka Engalishi?" and she replied, "Yes I do. Do you speak English?"

You set up your own film and TV production company, Huat Films, in 2011. What were some of the early challenges?
Early challenges faced and probably still facing are unconscious biases by the people in the industry who think an artiste can't direct or a female director can't know or do very much. But that's inevitable. I have no regrets, except that I should have started making films earlier!

This is now your third feature film as a director, what have you learned along the way?
My first two films were considered luxury shoots as compared to my third one. This time, I worked with minimal crew and cast. But I think for my fourth film, I am not going to work so hard. I will pay for quality, especially in terms of post-production. The post house that did my final audio mix and DCP [digital camera package] conversion ruined my media screening. I had to find another post house within 24 hours, redo my final cinema audio mix and conversion and reproduction of DCPs in one weekend, and my team had to personally deliver each and every DCP to every cinema location and we barely made it in time for the sneaks. It was the most stressful time. Oh well. Like I always say, filmmaking is an exercise in letting go and moving on.

What advice would you give a young filmmaker?
If you are going to do everything yourself, maybe start with short films. And get some experience working on bigger film sets and with marketing/distribution teams. After that, try to either become famous so you can get some sponsorships or get to know some investors who would believe in you.

You are a multi-tasker — writing, directing, acting, producing. What do you enjoy most and what do you see yourself doing more of in the future?
I enjoy the creative aspects of all the above, producing and acting probably being my least favourite. My dream is to just write and direct and have a big beautiful team doing the rest.

AS first written for IMDA.gov.sg, November 3