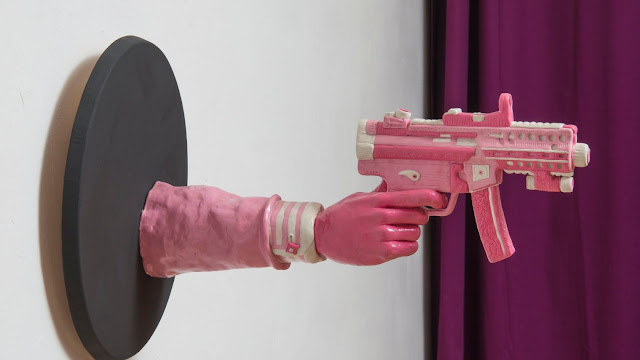 Entering the art gallery in Singapore, my attention is immediately drawn to a three-meter-tall pink giraffe that is draped in an EU flag and stands shackled by rope amid broken objects and small figures frozen in time fighting each other.

This striking conversation piece, titled “Too Far Away from the Heart,” was inspired by an African tale that Italian artist Maurizio Savini read in a children book. In the story, the animals of the savannah are angry at Giraffe’s lack of consideration, but when they confront her, she replies that her head is too far away from her heart to have feelings. This struck a chord with Savini who reinterprets the tale as a representation of the EU’s powerbrokers in Brussels, bound by bureaucracy and out of touch with the people.

Such serious political allegories are made that little bit more accessible by the material Savini chooses to use for his creations: chewing gum covering a fiberglass structure. In fact, nearly all Savini’s works on display at Partners & Mucciaccia’s gallery right now, are made of gum, an unusual material for making artworks, but one that has helped make the artist stand out.

“Many of my works look at hard, difficult subjects, like environmental issues, violence, economic injustice, animal cloning. Using chewing gum is my way of drawing people in,” he explains while gently re-shaping a detail on a sculpture of a pink missile. 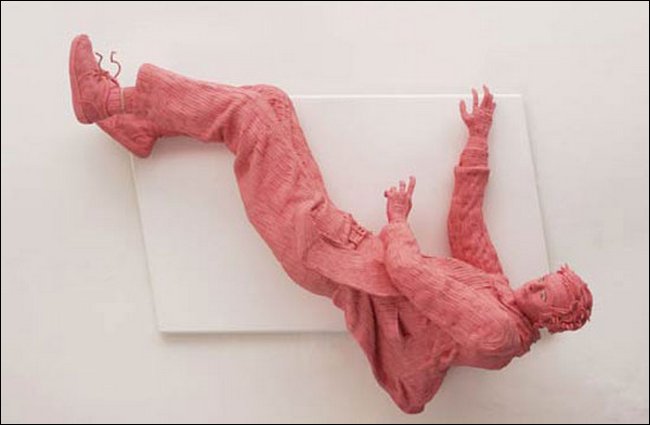 The unconventional material is certainly intriguing — and no, he doesn’t chew the gum (in fact he confesses he doesn’t even have a taste for it), instead, the artist and his two assistants heat up blocks of gum with a hot air gun rather like a large hair dryer. At the beginning, he had to unwrap single sticks of gum, which he bought in bulk in shops, but now he is sent the gum directly from a factory, unwrapped. The warmed gum is pressed around the fiberglass structure or mold like clay before it is coated with a mixture of formaldehyde and antibiotics to preserve it. So no snacking on the finished works! 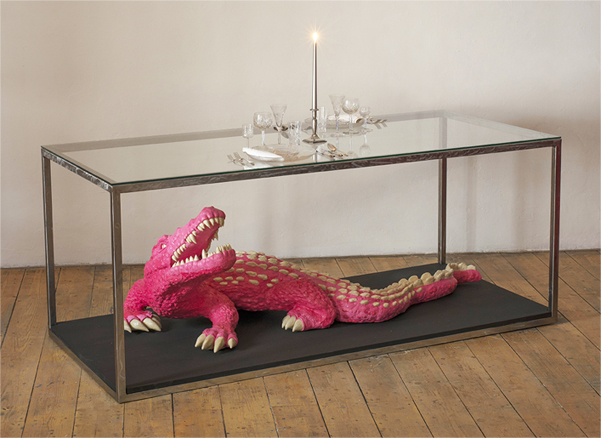 Amongst some of the other artworks on display is “American Breakfast,” a large glass table with a bubble-gum-pink crocodile, “Military Utopia,” a large military jacket covered with various signs and symbols associated with peace, and a series of works on what look like large iPads and iPhones that comprise a micro-mosaic of dyed gum to render personalities in the public eye. “Today we’re constantly attracted to pictures on our phones which we consume at the speed of light. I wanted to stop and take a counter position — I wanted to create an image very slowly [with this time-consuming micro-mosaic technique], and give a different perspective of time,” he explains. 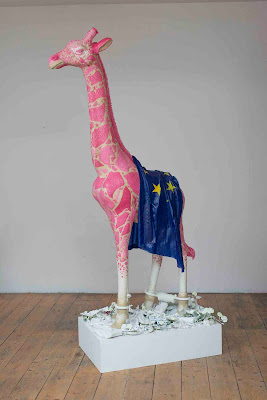 Like many artists, Savini started with oil paints, but he soon found himself experimenting with unusual materials, like potato and bread. In 1996, while walking in the streets of Rome, he saw a large box of bubble gum that had been thrown away by a storekeeper because the batch had expired. Intrigued, he brought it back to his studio and after a few days, the powerful smell of the gum prompted him to unwrap some and start playing with it. “I made a head sculpture and that’s when I realized the potential of the material, which is very malleable,” he recalls.

Savini likes the sugary smell, because it attracts the viewers to come closer, thus, drawn by the smell they actually study the work, while gum also brings to mind an artificial world. But the material has other conceptual links he likes to explore: “I like that gum is the only product you’ll put in your mouth but won’t actually eat it. You’ll end up spitting it out. I also like to give a form of beauty to something useless,” he quips.

Valter Spano, gallery director of Partners & Mucciaccia, describes Savini as “a true artist, very focused on his art,” and points out that “while it may seem rather simple at first, his work is actually very complex. He uses the bright pink to attract people, but once you come closer and really go inside his work there is a very deep meaning to his pieces.” Artworks average 12,000 euros for a small portrait to 80,000 euros for a large sculpture. 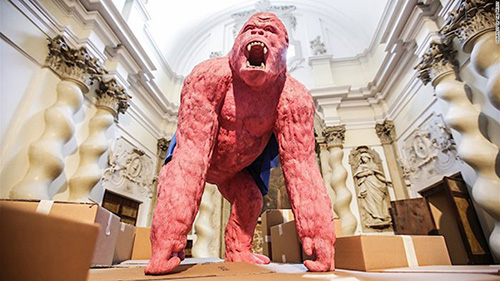 Of course, if you are an artist making a living using chewing gum as a medium, it would be hard to resist coming to Singapore without creating a little something especially for the occasion: a portrait of Lee Kuan Yew, the country’s first prime minister after its independence. After all, this is a city-state famous for banning the importation of chewing gum for years – though there has been some relaxation for dental chewing gums. However, Spano tactfully explains that Mr. Lee was included in recognition of his achievements as a leader: “He was the man who transformed a swamp into a primary financial center in the world ... so I think he fit perfectly with all the powerful people included in this exhibition!”