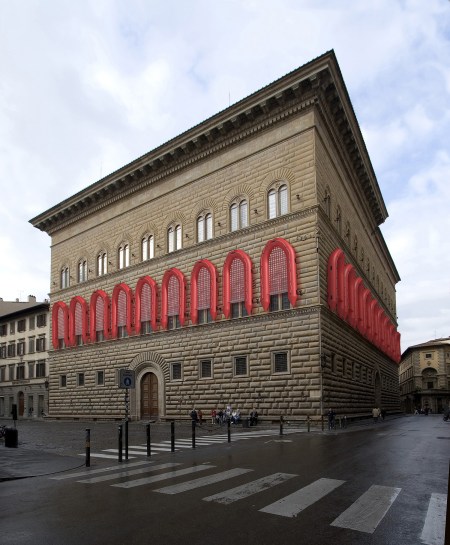 There is no stopping the Ai Weiwei machine. This fall, the sought after Chinese artist will take over the entire exhibition space of the Palazzo Strozzi in Florence — the first artist to ever do so — with a series of new works joining a selection of his major previous pieces that will spread from the building’s facade to its courtyard and grand interiors.


This first major retrospective in Italy for the artist is curated by Arturo Galansino, director general of the Fondazione Palazzo Strozzi, and spans works created in New York during the 1980s and 1990s, the large-scale assemblages (bicycles, stools) from the early 2000s, and his more recent work focused on political dissidents built out of Lego bricks. Galansino says the artist will also create new works related to Florentine history  [Dante; Galileo; Filippo Strozzi]
.

Ai, who has been involved with the plight of refugees on the Greek island of Lesbos for several months, will use the opportunity of this major exhibition to draw attention to their plight with an architectural intervention, “Reframe” on the two main facades of the building with 22 bright orange life-boats..
“It is a very important work because of the theme of migrations, which is one of the most important and urgent issues of our time in Europe; and furthermore, this is very important for the city of Florence: our city, the cradle of the Renaissance, is going to be, after long, long time, creating contemporary art again, and taking part to a crucial cultural debate,” Galansino says.

Works will be hung to respond to the architecture of the 15th-century palace that was itself built as a political statement of sorts by a rival to the Medici, who were ruling Florence at the time. Thus his large “Refraction” installation, first presented on San Francisco’s Alcatraz Island in 2014, will take over the palace’s courtyard. The work consists of reflective solar cookers from Tibet (a reference to that region’s struggles under Chinese rule) arranged to form a giant metal birdwing, which on Alcatraz highlighted the metaphorical constraints on freedom as the wing was installed inside the prison.

“Each work has been carefully selected, thinking about the context and the spaces of Palazzo Strozzi, which is an exhibition space completely different and unusual for contemporary art installations,” explains Galansino. “’Refraction’ in the courtyard will be very spectacular. The dimensions of the courtyard are not so big and the sculpture will occupy almost the entire surface, giving a sense of power and oppression at the same time. Furthermore, the access to the courtyard will be closed to the public and the sculpture will be visible only (while) walking around the columns of the porch: it will look like a beast in a cage.”