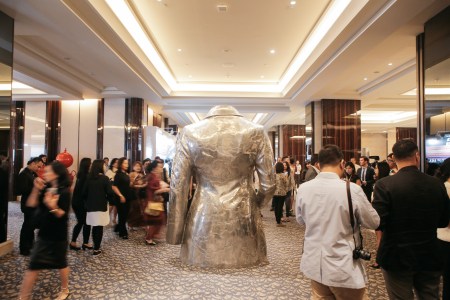 Lorenzo Rudolf, the founder and director of Art Stage, knows how to look after top collectors and clients. After all this is the man who introduced the modern VIP concept to art fairs back in the 1990s when he was at Art Basel and helped transform the fair from a trade show to the must attend annual art event for collectors. Fast forward 20 years, and Rudolf is still creating novel and interesting experiences for top collectors.

This service and attention to detail carried through to the inaugural Art Stage Jakarta, which was so much more than just a new boutique fair, thanks to its tie-up with prominent collectors in Indonesia such as Deddy Kusuma, Alex Tedja, Prasodjo Winarko, Rudy Akili, and Wiyu Wahono, all of whom agreed to open their homes to VIPs offering them an unprecedented peak at their treasures. And treasures there were, from early I Nyoman Masriadi and Agus Suwage pieces to recent works by Eko Nigroho. Entong Harsono and Handiwirman Saptuera, visiting these collectors’ homes was like having a crash course in the who’s who of Indonesian contemporary art, and beyond with works by Philippines artist Ronald Ventura and Chinese artist Zheng Fenzi.

The fair itself was held at the Sheraton Grand Jakarta Gandaria City, a hotel that pays more than the usual lip service to the art on its walls with several works by contemporary artists like Samsul Arifin, Yunizar, Christine Ay Tjoe, Handiwirman Saptuera and Rudi Mantofani, amongst others. Held across three halls, the fair retained a boutique feel with an easy and clear floorplan than ensured you never felt you were missing out and could take a leisurely approach to discovering what was on offer: primarily Southeast Asian art, with a strong component of Indonesian and Filipino contemporary art, too.

As with its bigger sister, Art Stage Singapore, the Jakarta fair also offered space to non-selling artworks with two small, but well curated, museum-like exhibitions: one dedicated to Affandi’s works and another, “Expose: The Collectors’ Show,” providing a peek at works from six private collections that span two generations, thus showcasing the evolution of local tastes with time and a more recent move toward multi-media and digital art works.

According to organisers, the fair’s 49 galleries drew a total of 15,180 visitors over three days (5th to 7th August 2016). But what about sales? Indonesian galleries that knew their audience well reported brisk sales: Nadi Gallery sold works by Handiwirman, ROH Projects reported good sales for works by Indonesian artists Arin Dwihartanto Sunaryo, Syaiful Aulia Garibaldi, Syagini Ratna Wulan and Singaporean artist Jeremy Sharma; Galeri Canna sold a new I Nyoman Masriadi for around $400,000. Still many international galleries, which brought in works that may be less well known to the predominantly local audience, did not fare as well, with rather fewer red dots at the end of the three-day event.


Art Stage Singapore, the flagship art fair of Southeast Asia, will be held from 12 to 15 January 2017.