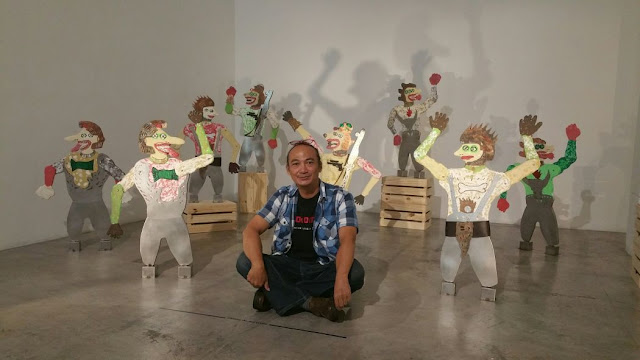 One of Indonesia’s foremost contemporary artists, Heri Dono is known for his highly recognizable iconography inspired by Javanese folk theater, such as wayang kulit (shadow puppetry), and comic books. While often darkly humorous, his performative works have a strong socio-political subtext, commenting on human behavior and contemporary issues like political corruption or damaging environmental policies.

The 56-year-old artist’s latest exhibition, “Zaman Edan” (The Age of Craziness) at the STPI in Singapore, features 40 works created during a residency at the print institute, and while his usual iconography of fantastical hybrid creatures and pop culture motifs is omnipresent, there are also plenty of subtle new developments in the work — from the use of bright color to the creation of screen prints on canvas against photographs — to surprise visitors.


While he has done some more traditional etching and mono-print works, he was interested in returning to printmaking on fabric or canvas rather than working on paper. “I started the residency with experimenting on fabric using a Batik technique. I had done some in 1984 when I was a student, but back then Batik had a really bad name in fine art, because it was seen more as a craft; and as a student I disagreed about that. I created about 20 pieces at the time.”

The results of his latest batik experiments, now on view at STPI, have led to more colorful artworks, with the use of pink, purple, and orange, not usually associated with his practice. “Back in the ‘90s, my work was more colorful like this, but yes, of late it’s been much more muted, monochrome, and darker [in color], but with the use of textile, I was interested in recreating that batik atmosphere,” he says.

“I’m using many elements and patterns I’ve used before: the wheel, the fire, the shoes, and yes they all have a meaning: The wheel is the symbol of progress; fire is a symbol of energy; the shoe a symbol of perhaps military or authority; the hand is a symbol of work, but also a talisman and something to predict the future. I like to put figures in the mouth as a reference to diplomacy, people (say) something with their mouth but not from the heart,” he explains, referring to these reference, with laugh, as “HeriDonology.”

Other recurring symbols in Dono’s artworks include pistols, speech bubbles, a drinking cup with smoke coming out (which he uses as a symbol of society), and his hybrid figures like Dinosaurus dinosaurs (“maybe it’s a ‘Dono-saurus’,” he jokes), as well as cartoon characters like the King (a symbol of power) wearing military boots or cowboys boots and a Turkish hat, Batman and mickey-mouse look-a-likes — “I’m a mouse in the Chinese horoscope, so maybe it’s another (version of) me, like the dinosaur.”


Currently on view until June 30, “Zaman Edan” (The Age of Craziness) includes two large mixed- media installations, also created during his STPI residency. One is a herd of flying horses made with papier-mâché and painted with pulp paper using a spoon (“a bit like making a cake”) and the other is “Wayang Zaman Edan,” several mixed-media, gangster-like puppets (in copper, brass, stainless steel and papier-mâché), some holding guns, that he refers as today’s “age of craziness” and violence.


As first published on BLOUINARTINFO.com