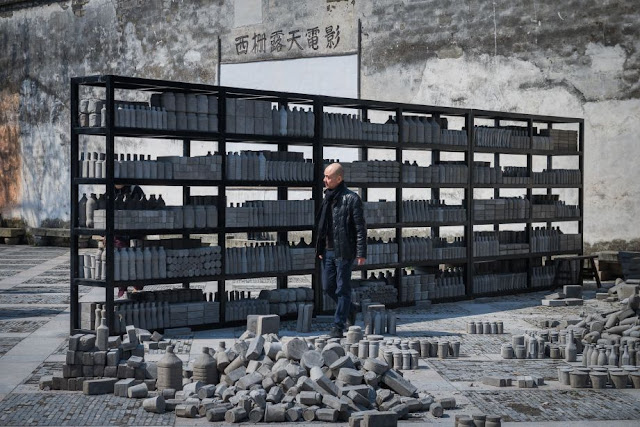 Located two hours west of Shanghai, Wuzhen has in recent years started to flex its artistic muscles, first with an annual theater festival in 2013, then with the opening of the Mu Xin Art Museum last year (see story here, and now with a small, but tightly curated international contemporary art exhibition around the theme of “Utopias/Heterotopia.”

What makes Art Wuzhen special is its location, spread over the West Scenic Zone and the nearby North Silk Factory, just transformed into a new contemporary art center.


With its picturesque Qing dynasty architecture, atmospheric canals, and photogenic hump-backed bridges, the West Scenic Zone of Wuzhen looks like a perfect image of Chinese history — the old town was extensively restored and visitors pay to enter, though some locals do live above their shops and around 3,000 tourists can stay there in hotels. Walking along its uneven pavements through narrow alleys, one feels like you are taking a giant step back in time to an idyllic gentle, simpler way of life, though one can still enjoy 21st-century amenities including free Wi-Fi.


Seven artworks have been located inside the old water town, some of which were created to respond directly to the space. One of the most eye-catching, already attracting the selfie crowds, is the giant pink and orange “Floating Fish” installation by Florentijn Hofman at the water theater, its scale and colors, a jarring modern intrusion against the otherwise serene space. Other intriguing works visitors are finding hard not to touch include a giant heap of large crawling metallic ants by Chen Zhiguang installed in a garden (a nice metaphor for the army of Chinese workers that have toiled over the centuries in this city in search of a better life), as well as “Standards” by Liu Jianhua, two long supermarket-like steel shelves stocked with everyday items, label-less and in gray cement (a commentary on consumerism and the standardization in our lives).

More subtle yet no less powerful is “Armor,” an installation by Antti Laitinen: an old tree encircled by steel sheets — the tree, like the old town, is seemingly protected, yet what will happen to it when it starts expanding against the steel?

“Again, Still, Yet,” is a large-scale installation by Ann Hamilton that takes over an ancient theater and poetically responds to it while also embracing the town’s silk traditions (on the seats she placed silk bobbins, as if a silent audience, and takes the thread from each of them, linking them above and across the theater to a traditional, functioning weaving loom on the stage). Another notable site-specific work is “Anyway,” a mechanical installation by John Kormeling who cut out a round in the pavement setting it on a turntable that slowly turns at regular intervals, thus sending an unsuspecting passerby standing on it in a new direction.

A 10-minute walk from the West Scenic Zone, the North Silk Factory was once the shining symbol of the industrial revolution, but was long abandoned to decrepitude before being given this new lease of life as a white cube space.

The fast transformation of the old factory space can be best understood through the installation and performance work of Oliver Herring, “Areas of Action – Wuzhen.” The experimental artist came to the town last fall and enlisted a few volunteers to help him create a new collaborative body of work based on spontaneous performances in the space, which was then still under renovation. Under Herring's direction, the strangers interacted for example, spray painting each other, in order to create some stunning visual works captured on photographs and videos now on display in the gallery.

The works on display at the former silk factory include old pieces such as Abramovich’s five-channel video installation “Spirit House,” (1997), Xu Bing’s animation “The character of characters,” (2012), Miao Xiaochun’s 2011‑2012 video installation “Out of Nothing,” and Mao Tongqiang’s large-scale 2008 “Tools” installation (3,000 hammers and sickles on the floor, offering political connotations of ideologies laid to rest) and new works such as Studio Job’s “Pagoda,” a crystal globe installation inside a castle cum Great wall with finely printed design affix to glass window to create a stained effect, and Sui Jianguo’s “Entanglement,” a large-scale outdoor sculpture inspired by the process of a silkworm spinning a cocoon.

Also of note are Song Dong’s “Avenue Square” installation, a hall of mirrors with lights representing the night sky, pretty flowers in a street, and a more sinister lamppost holding seemingly fake CCTV cameras (though one of them is actually real and capturing imaged broadcast in a room nearby), along with Eliasson’s mesmerizing 2004 “The Inverted Panorama House,” an installation of glass elements rotating at different speeds with light reflecting on them that creates an interplay of reflection and shadows.

While pride of place was given to Ai Wei Wei’s 2015 “Color House” installation — the framework of a Qing dynasty-era house covered in colorful industrial paint that brings together old and new to allude to the country’s rapid urbanization — it seems almost lost in a giant air-conditioned glass box away from the main factory compound.

Chen Xianghong, chairman of the exhibition and head of the Wuzhen Tourism Co., a private company which oversees the management and development of the West Scenic Zone, said at a press conference that the center would be used for regular art programing that could event include an art fair, though he could not give more details. The company is also considering acquiring some of the artworks created for Art Wuzhen, like Hofman’s Floating Fish — it’s easy to imagine that fish featured on all sorts of souvenirs.

The Art Wuzhen exhibition will run through June 26, 2016.

*as first published on BlouinArtinfo.com