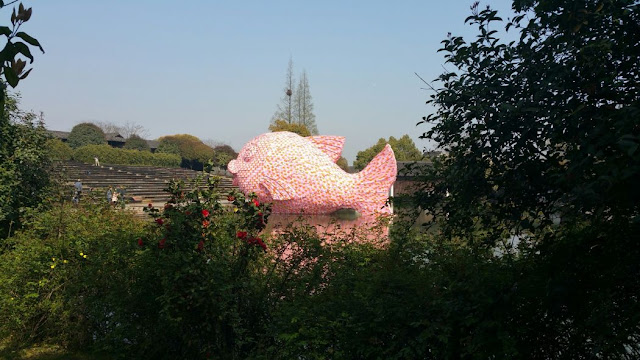 Best known for his oversized Rubber Duck which has been popping up around the world since 2007, Florentijn Hofman has created a colorful site-specific installation for Art Wuzhen that continues his practice, placing another massive animal sculpture in a public space.


The 15-meter-long, 7-meter-high Floating Fish is set on water at an old amphitheater in the West Scenic District in Wuzhen, China, though Hofman says he was initially reluctant to participate in the inaugural contemporary art exhibition, because he was already committed on so many other projects elsewhere – he currently has about seven large-scale projects on the go.

However, he was prompted to join in after he visited to town: “I’ve travelled a lot in Asia and I felt this place is very different from the China I know. I couldn’t resist because it’s such an interesting place, it brings so much tourism; in a way it’s a complete heterotopian place, so in that respect I feel the title for this exhibition (Utopia/Heterotopia) is well chosen.”

Blouin Artinfo talked to the artist at the opening of the exhibition.

Tell me about the genesis of this new project?

When I came here it was a rainy day and the location I picked was fantastic still in a rainy day. This place looks like a kind of sea-world to me with something missing, a dolphin or a killer whale. Then when I walked around the town that day, I saw people feeding koi fish in a large pond and I also saw sculpted reliefs of fishes on the wall. At the same time, the Fish also has a great significance in Chinese culture, it brings happiness and wealth, and it’s a kind of utopian idea too, the wish of having more money and happiness.

What about the choice of material?

The skin of the fish is what gives some layers to the work. The material used is the kind children use in swimming pools (swimming kickboards). The scales I gave it also refer to the [Chinese] legend of the fish that followed the Yellow River and turned into a dragon, and the skin of my fish is a bit like a dragon skin with scales. I wanted to put some Chinese elements in the work, because it is site-specific.

Why did you give it a pinkish color?

In the environment (of the theater), you see brown, green, and it all blends down toward the stage and then you have these white buildings in the background and the blue sky, but I felt there was something lacking, and that’s exactly the colors (a mix of different shades of pinks and oranges) I chose to balance this place.

All your works have a child-like aesthetic.

I like to use mass-produced toys that you find in grandma’s shop windows or flea markets. I kind of kidnap them from a production line which is already made. Children have played with them and now I transform them, scale them up and give them different skins. The size changes and the meaning of these objects also changes.

What else are you working on right now?

A really nice project, in Shenzhen, which has been nearly four years in the making and will be unveiled in April. We’re also working on a big project for the national airport in Amsterdam which will be unveiled in September, and there is also something for a central station in Holland. The rubber duck will also be in Macau soon.

The Rubber Duck is the only piece that travels. Why?

The concept of this piece is and will forever be a rubber duck traveling in a global bath tub, the waters on the planet. That’s why the rubber duck pops up everywhere. It’s not because I like it so much, that’s the concept. People push it or attract it, because they pay money to get it of course, like a child who plays with their toy and bounces it around in the water. But that’s really the only work that I’ve done like that because I think what I do best are site-specific works: Go somewhere be influenced by the place and then create a nice work together with a great team.

Any projects that haven’t come to fruition yet?

I was working on a proposal on the Merlion in Singapore. I made an insane crazy work, but a really good one, and then something happened and they didn’t go for it. But I still have three of these Merlions in my studio. We can still do it… it would be a great piece!

As first published for BLOUINARTINFO.COM