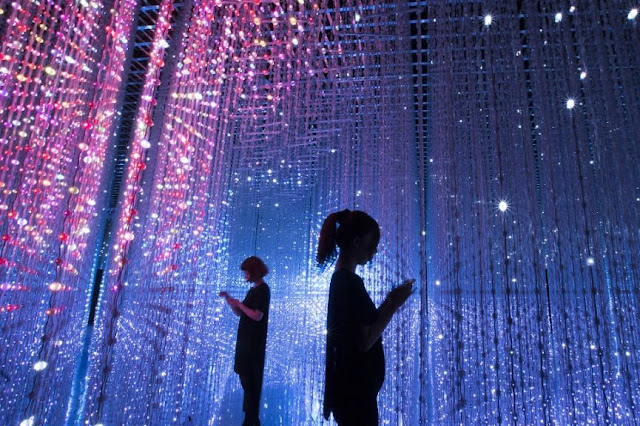 Since it first appeared on the art scene just four years ago, the Japanese new media art collective teamLab has made some quick headway internationally and has a packed schedule this year.

In January, one of their giant digital wall installations greeted visitors at Maison & Objet Paris, then in February they opened their first major exhibition at Pace Art + Technology in Silicon Valley, showcasing 20 works, and then in early March it was the turn of the Borusan Contemporary in Istanbul to unveil a teamLab exhibition.

Going forward, teamLab will be at Martin Browne Contemporary in Sydney and then later this year, they will take over two floors of Saatchi Gallery in London, for another fully immersive experience.

This week, several members of the 450-strong member collective, that includes artists, engineers, programmers, CG animators, mathematicians, architects, and designers, were in Singapore to unveil the ArtScience Museum’s first permanent exhibition “Future World: Where Art Meets Science,” the first of two major permanent exhibitions they have planned in the city state.


Spread over more than 16,000 sq. ft. (1,500 sq. m.) or about a quarter of the museum’s space, the new immersive exhibition is a visual and aural treat, a fitting tribute to the museum’s “art meets science” concept.

Most of the exhibition’s 15 digital installations are designed to be fully interactive and will bring out the child in any adult, and of course delight any children. Who wouldn’t thrill to see their drawing come to life as an animated character in a colorful digital world or become a 3D object? In Sketch Town, one can color in and draw objects such as cars, buildings, and spaceships and then see them appear on a giant digital screen depicting a futuristic Singapore (the Merlion is still there!) and then interact with their work. Connected to this installation, one can also turn the drawing into a paper craft pattern and assemble it into a three-dimensional paper craft model.

Beyond the children-friendly installations, there are plenty of food-for-thought artworks, such as an interactive digital installation of flora and fauna that die if you come to close to them, but can also grow if you step back and stand still. The artwork is both generative — the plants and butterflies are created algorithmically, and reactive — they respond to the natural environment, with flowers blooming in tune with the seasons of the year. 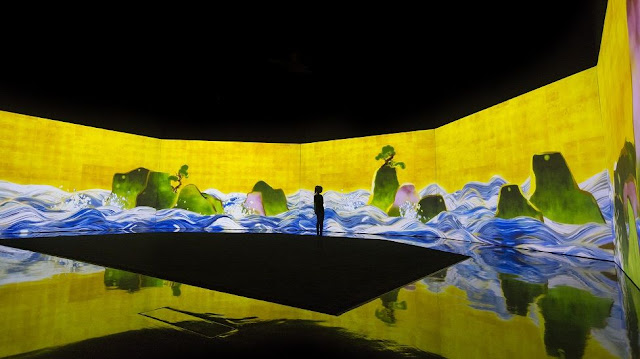 Meanwhile, the stunning 100 Years Sea Animation Diaporama gives a chilling glimpse into the effects of climate change as it illustrates the rising sea level along a Japanese coast based on predictions for the coming century that have been condensed into a 10-minute time frame. Beyond the technical feat, the installation’s aesthetic beauty brings to mind Japanese woodblocks and can be admired while lazing on beanbags.

The final work, Crystal Universe, is another must-experience installation as visitors enter a far, far away galaxy, immersed amongst 170,000 LED lights (which give the illusion of stars moving in space). The installation utilizes teamLab’s Interactive 4D Vision technology, which allows users to control the LEDs to give this illusion of light movement via an app that can be accessed on smartphones. Swipe the screen and feel like you’re standing at the center of the universe. 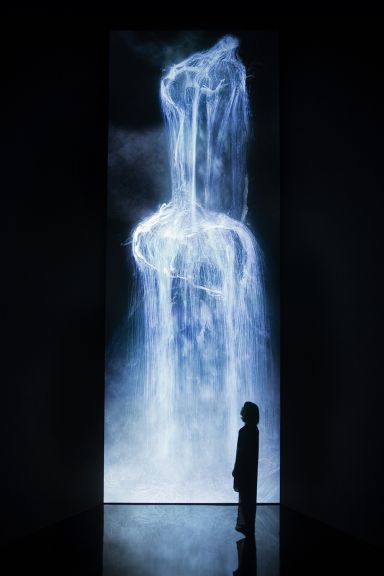 Later this year, teamLab will unveil a second massive digital art installation, this time at the National Museum of Singapore. It will be based on William Farquhar's drawings, and we can’t wait!