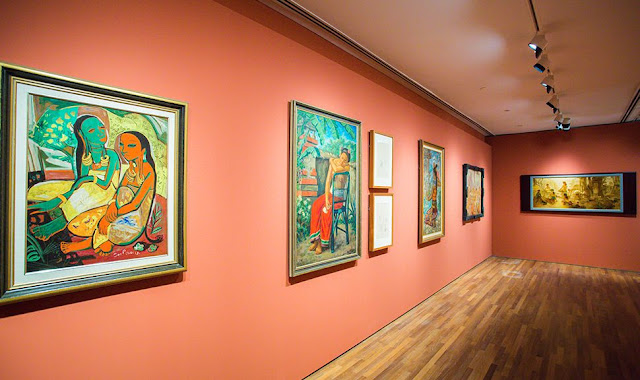 The National Gallery Singapore will open at the end of November, but some members of the media have already been treated to a sneak preview of the DBS Singapore Gallery, where 400 artworks illustrate the evolution of art in Singapore from very early representations of an exotic tropical paradise in the 19th century to the emergence of the Nanyang art movement in the 1950s and the development of a contemporary art scene.

The gallery opens with a long-term exhibition titled ‘Siapa Nama Kamu?’ (What is Your Name? in Malay) that is intended as an invitation to consider the parameters of personal and national identity, and how they relate to art in Singapore. Central to this is the oil painting National Class by Chua Mia Tee, who was recently awarded of the Cultural Medallion (the highest official artistic honor in Singapore). The work was created in 1959, the year Singapore gained self-governance from the British, and has come to resonate with that historical moment and the issue of national identity.


Located on the first floor of the new national museum and sprawling over 1750 square meters, the exhibition is beautifully laid out, taking visitors on a chronological journey, loosely organized around six main themes – Tropical Tapestry, Nanyang Reverie, Real Concerns, New Languages, Tradition Unfettered and Shifting Grounds – though there are different levels of confluence or interaction between each of them.


Southeast Asian art lovers will find themselves on familiar ground, revisiting “old friends’’ of sorts, as several artworks have been presented previously at the Singapore Art Museum, often as part of various artist retrospectives, or as part of art surveys of various periods and movements presented over the past 15 years. These works include Put Down Your Whip, painted by Xu Beihong in 1940, portraying actress Wang Ying's performance in the patriotic anti-Japanese play of the same name (the work is on loan from a private collector who acquired it for $9.2 million at auction in 2007, a record at the time for a Chinese painting).


Other old favorites include Liu Kan’s Life by the River, 1967, and Cheong Soo Pieng’s Drying Salted Fish, 1978, a richly detailed market scene in Chinese ink and color on cloth that is featured on the country’s S$50 bill. But there are also plenty of new treasures to discover. For the first time, curators have gathered together paintings that resulted from the defining 1952 field trip to Bali by Liu Kang, Chen Chong Swee, Chen Wen Hsi, and Cheong Soo Pieng that launched the Nanyang Art movement. Many of these works have not been displayed since the 1960s, and they show the interesting interpretation and assimilation of Western genres within an Asian context.


While the Nanyang movement has usually been associated with the 1950s onward, the curation is also trying to highlight the historical and social context that influenced its rise, for example the cosmopolitan training (in Shanghai and Paris) of many of these artists while showcasing less well-known artworks from the 1920s and ‘30s by artists such as Georgette Chen, Tchang Ju Chi and Lim Hak Tai.

Another particularly interesting section is New Languages (1960s‑1980s) that shows the move away from realism and the embrace of abstraction by artists like Anthony Poon, while the Tradition Unfettered section focuses on the development of Chinese ink in Singapore, led by migrant artists like Chen Wen Hsi. The overlap with the Unfettered, Nanyang, and the New Language sections is interesting here, as the important artists straddled all three.


Contemporary art is not ignored, but gets a rather limited treatment. Anchoring the museum’s focus on 20th century art, Shifting Grounds, covers the 1980s to 2005 with well-known works by Tang Da Wu, Lee Wen, and Ming Wong.

In this new gallery space, the city-state is finally getting the long promised museum showcase its artists deserve, and with its yet-to-be-unveiled permanent galleries dedicated to Southeast Asian art, the National Gallery Singapore is bound to become a must-visit destination to see Southeast Asian art when it finally open its doors to the public on November 24.