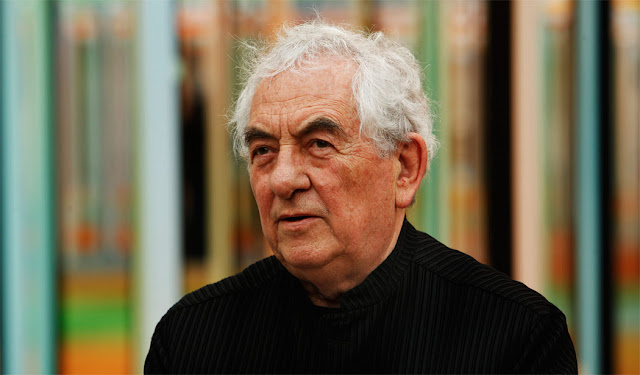 At 77 years old, Daniel Buren has lost none of his disruptive streak and continues to talk frankly. The celebrated French conceptual artist is in Singapore for Cabanons, a performance project that blends circus acts with contemporary art in simultaneous performances in three pod-like colourful tents erected close to each other. As is often the case with his works, Cabanons is spatially audacious, with the performers at times partly hidden by suspended striped door frames, white mosquito nets, or large mirrored planes.“With this show, you have to open your imagination to what is happening elsewhere. The set up plays with what is happening under your eyes, but also what you hear and what you imagine is happening elsewhere. And maybe what you hear will never happen in your tent because as the performers turn around the performance is never quite the same. This will give to spectators in each tent totally different experiences,” he explains.


Throughout his career, Buren has challenged the viewer’s concept of space with his in-situ works. In 1971, in the Guggenheim Museum, he controversially installed a 66 x 32 ft. canvas banner with his signature vertical stripes, which dissected the exhibition space under the rotunda in two, obstructing at times the view of other artists’ works in the group show. Their negative reaction was so strong, that the work was taken down before the opening. His first permanent public commission, “The Two Plateaux,” 260 black and white columns of different heights was installed in 1986 in the courtyard of the Palais Royal in Paris and immediately generated an art-or-eyesore controversy.


Asked to describe his work to a neophyte, Buren quips he couldn’t possibly: “I’m working with space, but that doesn’t tell you much.” Seated in one of Cabanons’ tents, bathed in yellow light, Buren talked to ARTINFO about his career, ‘that’ Guggenheim failed exhibition, why he “hated” the current Venice Biennale and why he agreed to collaborate with Hermes and Louis Vuitton.

Why the stripes?
It came in the process of the work, when I was very young. It came little by little, but I don’t think it happened by chance. When you look back you can see a logic, though it doesn’t exist when you start, and it develops by itself. One work calls for another work, etc. They all built on the fact of doing. For me, it’s very important; you do it and immediately other possibilities happen, step by step. So, going back, I was working with painting, but I was never satisfied and then one day I found in the marché Saint-Pierre a material, a striped linen, which was in a way much closer to what I wanted to do than what I was able to do with painting. I started using the material with very little paint and little by little the painting reduced to the point I realized I was very close to what I wanted, and that opened the door to something else I hadn’t thought about which was to work with the space and work outside of the art system, galleries and museums. Looking for a studio, I also realized it was too difficult so I quit the idea of a studio and that’s when I started working in the street. This was the very first step to a much more interesting opportunity, working in situ wherever I was invited.

Tell me about your relationship with color?
I’ve always used color, even when color was completely rejected, and I got a lot of criticism when I was doing group shows with other conceptual artists for the vivid colors I was using. I was totally against this period, close to minimalism, when color was almost excluded from visual art, which I found problematic. How can you take out color from visual art? Because I’ve always thought that color in visual art is the only thing that is totally impossible to describe and replace by words. I think it’s the only way in the art field to speak without speaking. Everything else you can describe.

Looking back through the decades, how do you view the progression of your work?
I can see some direction, but I think I still need more time to see this well. Still, I would say that between the mid-60s and the early 1980s, about 90 percent of my work was based on a very strong radical criticism, not only that of course, but that was certainly predominant. But at the same time as the art world changed, a lot of the criticism I was making in the 70s was no longer interesting in the 80s, so I sought to reintroduce more visibly in my works all the things that were not so visible, such as the physicality of the work.


Why didn’t you show your 1971 censured piece at the Guggenheim in 2005 when you got a major solo exhibition there?
Everybody was expecting me to show that work in 2005, but I refused, simply because it was no longer relevant 35 years later. The work still exists in New York, so I could have shown it, and I’m sure everybody would have said, it was a beautiful piece and we don’t understand what the fuss was all about. But it’s very easy to understand, because when I did it, it was the very first time the space under the rotunda was being used. That center had never been used. But since the 80s, I think every artist they’ve invited has used the center, so to come back with my work was pointless. If you don’t live with the time, you’re outside it. The passing of time changes everything. That piece was of that time, not now. Thirty-five years later, you lose what was part of the work, the context. And to do something as part of a group show as it was back then, and a one man show, well, it’s another story, too.


Do you have any favorite projects?
Too hard to choose. For many reasons, the Palais Royal project was quite an exceptional project. It was the first piece I did permanently, I think it’s a pretty nice piece, too. It generated a lot of debate at the time, but the fact that it’s working incredibly well 30 years on, well … For me it’s really fantastic to be able to go there and listen today to what people are saying about the work, and how they react to the piece. The Guggenheim piece was also an important piece for me, but then to speak about that, you have to speak talk about the whole story, which I’m still not too pleased about.


What do you think about today’s street art?
I must say the process is very close to what I did in terms of attitude, physically taking the risk. But I used posters, and they’re using paint. And of course the imagery is completely different. But I don’t like how completely commercial street art has become today. They’re all doing works for the museum and the galleries, putting it on linen. I don’t like that.


Where do you get your ideas?
From the space. I work in situ and I don’t go in with preconceived ideas. I look at the space, I speak to the people responsible of the space, that’s when the piece starts to happen.


Last exhibition you saw?
The Venice Biennale, and I hated it, absolutely. I’m speaking about the international exhibition, which is usually the worst (of all the exhibitions) in Venice and this year, it really reached the bottom. Very pretentious, absolutely chaotic, impossible to see clearly what they wanted to do.


You have done collaborations with Hermes (carré d'artiste scarves in 2010) and Louis Vuitton (window displays in 2013), what can you tell me about those projects?
I usually refuse most of the offers. With Hermes, I was having an idea that I thought was almost impossible and I told them, ‘if you can do that then I’m interested.’ My idea for the square was to only make unique pieces. I’d seen in their manufacture an incredible ink-jet printing machine that could do 300 or 400 colors at once on paper. I told them if you can do that in silk … They took up the challenge. We did 365 different works, each unique. I would never have done 500 piece of the same thing. For Louis Vuitton, I did 17 different window displays, it’s an incredible opportunity for any artist. I did exactly what I wanted to do. A lot of people asked, ‘Why did you do this?’ Well, I can do a work like I would in a museum, but it’s in the street, and it’s not just in one street, it’s in 17 capitals in the world. Even if you’re very successful and you have three one-man shows in the world, that’s the max. So now for six months, you have 17 exhibitions visible by anyone that passes by. And even if they don’t realize it’s my work, I don’t really care. When I did the poster in the subway, no one knew either.


Any big projects?
A big show coming up at a museum in Belgium next March. It will be completely new and I prefer not to say too much about it. But a part of it will be playing with the idea of retrospective, which might be the only way in my case to give a long view to what was done. And then I’m waiting for my work at Tottenham Court Road subway station in London to be completed next year.