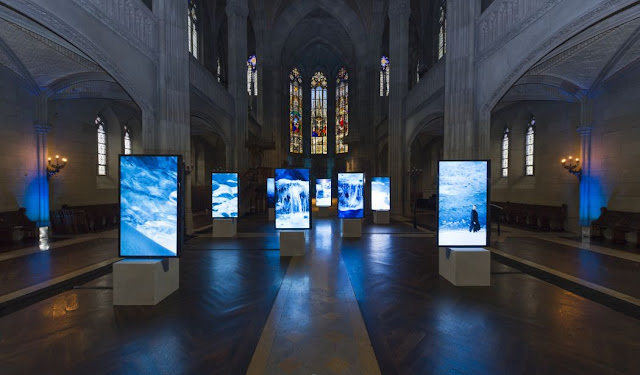 Not far away from the crowds of Art Basel, British artist Isaac Julien has unveiled a large-scale installation of “Ice Cave,” the first of a three-part “Stones Against Diamonds” film dedicated to the work of Italian-born Brazilian architect and designer, Lina Bo Bardi.

The venue, the grand and quiet neo-Gothic church, Kirche Elisabethen, proves the perfect setting to house the reflective and visually stunning work of Julien shot in remote glacial caves in Iceland (the same recently used for Games of Thones filming).

A letter written by the late architect, in which she expresses her love for semi-precious stones over precious stones, was the departing point for the artist, who worked with a crew of 15 to film in sub-zero temperature.

Julien created a very “poetic” and contemplative homage to the designer, subtly incorporating signature elements of her work — a replica of her famed spiral staircase designed for Solar do Unhao and her glass easels created for Museu de Arte de Sao Paulo. Actress Vanessa Myrie, dressed in white Issey Miyake robe, seems to sleepwalk through the glistering caves and black volcanic sand of Iceland, evoking Bo Bardi’s spirit with the ice cave used, according to the artist, as “a metaphor of the unconscious, a place of rich beauty but difficult to access, except through the processes of psychoanalysis and artistic reflection.”

The 10-screen presentation actually manages to transport the viewers to the location, with almost every single frame lending itself to a separate photograph. The piece is actually even more effective without its sound track, particularly in a church environment.

Commissioned and supported by Rolls Royce Motor Cars and first unveiled on 5 screens at the Venice Biennale 2015, the 10-screen film installation is now on view until June 17. The artwork was commissioned as part of the Rolls-Royce art program that has already supported artists like Angela Bulloch and Morgan Wong.