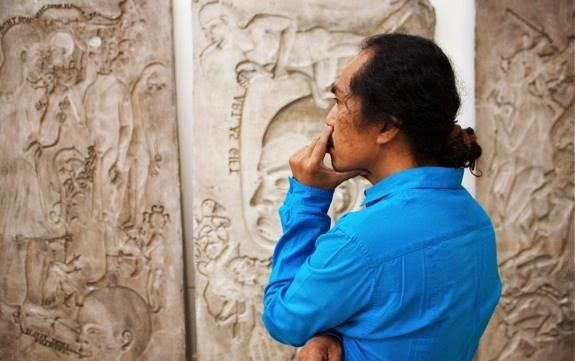 For Entang Wiharso, one of Indonesia’s premier contemporary artists, art has always been an opportunity for reflection on his personal experiences and his practice has long explored universal issues of social connections with visuals of human figures, often portrayed with long tongues, interconnected to one another by intestines or connected to machines through hoses. His work is instantly recognizable.
While he is perhaps better known for metal reliefs that combine influences of temple relief and traditional wayang puppetry, he has also used canvas and to a lesser extent paper. With his current residency at the Singapore Tyler Print Institute, the 47-year old artist explores that latter medium in more depth, working on about 40-50 pieces using paper cast together with photography, and print as well as alternative materials like mirrors, wool, wires, nails, and aluminum, often incorporated in the print and papermaking processes.


Beyond this experimentation with materials that has led to a new aesthetic, Wiharso is also working on new imageries one of which uses colorful balloon shapes while another utilizes newspaper scraps. These will surprise collectors used to his earlier works.
“I was inspired by my sister-in-law, who’s a cancer patient. Cancer patients can struggle facing life, but my sister-in-law saw life always thinking positively, and this image is more one of hope,” he explains describing a work in progress - colorful balloon shapes onto which he plans to overlay a black and white photograph of a female body creating an effect of an X-ray, revealing the pain of a patient.
Talking about his earlier recurring images of mangled bodies and long tongues, Wiharso explains, “Java is very dense, population wise. There are people everywhere, and I want to create that psychological tension in my works. My space, your space, encroaching onto each other; I want to represent that emotional feeling, and that’s why they are all connected with intestines or wires, it’s about our connection to each other. It started when I was living in the States in the late 1990s; I was homesick, missing my family, thinking about them. But intestines also represent something very personal for me because I’ve had problems with mine, when I get stressed.”
“Tongues are also very important as a tool for speaking, obviously, and in politics. It’s kind of a symbol for propaganda,” he adds, while explaining that the recurring knife imageries in his work are not always a symbol of aggression, “My work sometimes comments on (the idea) tools can be useful but can be dangerous depending on whose hands are using it. But in Javanese culture, there is a woman always carrying a small pin, a symbol of protection. The knife is like the pin, a symbol of protection, though you can read in this differently, there are many interpretations!” he says with a laugh.
Amongst the most intriguing piece now being produced in the STPI workshop is a self-portrait of the artist producing newspaper and internet clippings (some in Javanese some in English), onto iPhone-like cases. “I’ve been collecting images or text from 1967 onward until today; it’s an individual portrait but at the same time a collective one,” he explains.
While the full range of STPI works will not be exhibited until April, STPI is already planning to present some of these new works to collectors at Art Stage Singapore 2014 in January, and most likely also at Art Basel Hong Kong in March.
Separately, the artist will have his first solo exhibition in New York at Marc Straus Gallery, opening January 7.