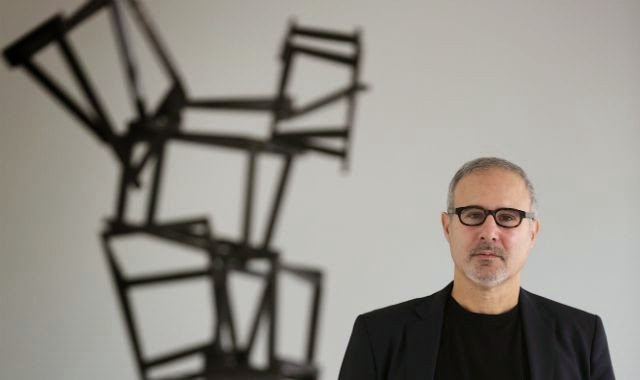 American artist Jedd Novatt, whose works stand proudly next to the Guggenheim Museum in Bilbao and in the sculpture garden of the Pérez Art Museum in Miami (amongst other places), has just opened a solo exhibition at Art Plural Gallery in Singapore that features two large-scale sculptures as well as smaller works and seven very recent mono-prints. I talked to the sculptor when he was in town to discuss his work and practice: 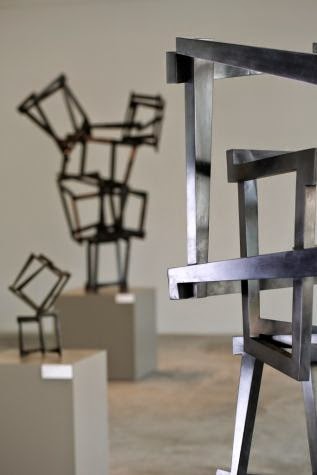 Tell me about the exhibition?
There are works dating from 2000, 2009, and very recent works. We thought we would do an exhibition that would present some of the earlier pieces I did in the Chaos series, which started in 1999, and its evolution. This series has lasted actually much longer than I thought and that’s rather atypical for me, but I just feel limitless in the expression. I keep exploring some ideas where I feel I’m getting closer to (the limit), but then I realize I’m not at all, so it’s this constant movement. And it obviously relates a lot about the idea of modernism and classicism and truly what is contemporary art.
What is the Chaos series about?
Ultimately I’m interested in carving space, and to a large degree describing or breaking the plane of space. How do you crack a space? How is the space as a volume, a form? And then you start thinking about what drawing is; it’s a description of something within a space. As you put a line, it immediately, completely alters our perception of a plane of space and so for me, even in monumental work, it’s about how am I altering space or thinking about space, volume. What is the volume of air, so to speak?
Many of your sculptures look on the verge of collapse.
It’s not an intentional idea. My works don’t have false balance; whether they’re 10 meters high or small, they sit perfectly. For me it’s very important they sit honestly, they don’t need to be pinned down.
But there are some laws of gravity to respect.
I don’t understand but it’s just instinctual. I know that they’re standing as I create them because I start with the floor, a levelled surface, but I have a sculpture in mind, a very specific idea of what I’m looking for. My work is very much about how I can instinctually make something and as quickly as possible; I don’t want to lose the spontaneity of the expression and I think of each ultimately as a drawing. Afterwards, there is editing that I’ll do, but I don’t want to think about it too much when I’m working. I create each element of the sculpture first out of wax or plaster, same for monumental works. They are all independent, and then when they are cast in bronze I literally try to have a spontaneous creation by bringing them together, though obviously I have an overall vision in my mind from the start. Of course I’m talking about this idea of spontaneity, but it’s been 30 years, so it’s a controlled one. 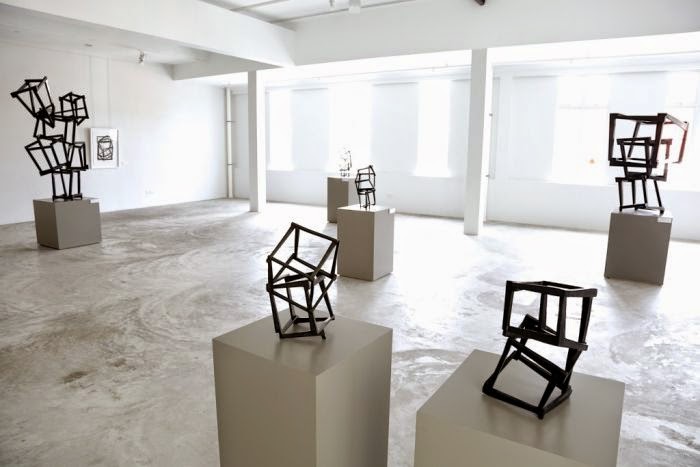 What else are you working on right now?
Primarily two monumental projects; both are in the United States, but I can’t talk about these yet. I’ve also been asked to have an exhibition in Europe, but right now I’m focused on these monumental sculptures and my show in Singapore.
What's the most indispensable item in your studio?
Gravity.
Do you listen to music when you work?
Bach, I’ve been listening to him for years.
What's your favorite place to see art?
In an artist’s studio — to see the art where it’s made without any of the formalities of a gallery or a museum setting.
Who's your favorite artist?
Though he just died a few years ago, I have a great deal of respect for Antoni Tàpies. He had a lot of ideas and he seemed to like to make art. His work doesn’t feel contrived and it’s not riffing at all on what has become a prevalent, pop and kitsch aestheticism. I just respond well to his work, it’s very intelligent work.
Any other artists who’ve influenced your work?
I think we’re more influenced by what we don’t like than what we really like. So I’m influenced by everything I see one way or another, but sometimes it’s more, “I don’t want to go in that direction.”
Do you collect anything?
Sure, but my main interest has been to trade works with other artists and I’ve been doing that since I was 20 years old.
For example?
I’d rather not say. But the last thing I purchased was an obscure 19th-century drawing by a French artist. I found it in a small gallery in Paris, they didn’t even know whom it was by, but I just loved it.
Any art world pet-peeves?
There are now so many huge art fairs that gallery exhibitions seem to be almost secondary to those. I feel it’s unfortunate because there is an intimacy and experience that you have in an art gallery, where it’s not about the spectacle. So yes, maybe the art fair concept has taken over a lot of things.
What’s the strangest thing you’ve seen in a museum?
I think people are now experiencing art through their iPhone. The experience of art has now become more abstracted; today people go to museums and tick boxes, they take a photo, they don’t actually look at the art, only through their phones. I see it all the time.
Any hobby?
"Working, and when I'm not working I enjoy hiking with my family and dog."