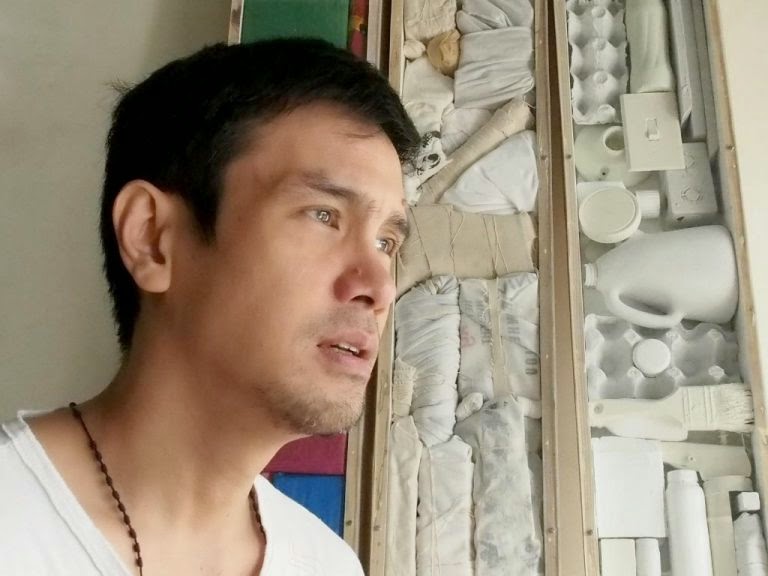 Phlilipino artist José Santos III started his artistic career as a figurative painter commenting on social and political issues often using an allegorical style, but in recent years, his practice has turned to using everyday objects as abstract subject matter. His upcoming solo exhibition at Pearl Lam in Singapore, opening on November 22, will be his first major solo show in years, and he will present eight oil on canvas works and five installations. I talked to the artist for BLOUIN ARTINO:

2hide is a strange title. What does it mean?
The dictionary definition format of the exhibition’s title, 2hide, plays on the twofold meaning of the word hide in its varying and at times overlapping usages; as a verb, describing the act of concealing something from open view, and as a noun, describing a skin that acts as a protective exterior surface. These contexts, ‘inside’ and ‘outside,’ do not merely alternate, but are at times simultaneous.
What’s the new series of works about?
This new series is about creating a heightened awareness of everyday objects by imbuing them with expanded meaning and new associations. My previous works sought to contradict the order of reality under a convincing veneer of naturalism. The works in this new series reflect the forays into a diversity of techniques and processes that I’ve been engaging in over the past half-decade. While it may appear that this shift is something new to my work, it is actually a return to a concern that I'd explored for my first solo show back in 1994.
Assemblage of objects, photography, digital intervention, deconstruction of the printed image, collage, and painting are amongst the avenues I have explored in recent years in order to flesh out expanded possibilities in image-making, picking up on a thread that started early in my career about the eloquence of inanimate objects. 2hide marks the germination of these earlier seeds of interest.
So what objects are you using?
Ordinary objects that routinely go unnoticed. They are things of the everyday; things that have been thrown away; things that we know very well — indeed, that we know inside-out. It is for this precise reason that they have been selected. Through representation and re-presentation, a heightened awareness of everyday objects is experienced, illuminating how our perception of these objects is colored by the value (or lack thereof) we imbue them with — and how the nature of their ‘objecthood’ is, in turn, tempered by our perception.
What else are you working on now?
I’m currently involved with an installation project being organized for the University of the Philippines. Also I have some research work that I want to do for future projects.
What's the most indispensable item in your studio?
My camera.
Where are you finding ideas for your work these days?
Everywhere. I see them when I go out of the house, have conversations with people, while sleeping...
What's your favorite place to see art?
It really depends more on what's exhibited than the actual place.
What's your favorite post-gallery watering hole or restaurant?
I usually go straight home from a show because in Manila openings can go really deep into the night! So there's really no reason to go anywhere else.
What’s the last great exhibition you saw?
Nilo Ilarde's "Faulty Landscape" at Artinformal.
What's your art-world pet peeve?
When people fail to see art for what it inherently is; and pretentiousness.
What's the first artwork you ever sold?
I sold my first work sometime in the mid-90s. It was a small painting of a religious icon from a group show. I used the money to buy art materials and some books.
Do you collect anything?
I have a small toy collection. I also used to collect some useless junk like bus tickets and ball pen caps.
What's the last artwork you purchased?
I usually just exchange works with other artists.
What work of art do you wish you owned?
There's this one work I made for a competition when I was still a student that I gave to an artist friend of mine.
What would you do to get it?
Beg.
Who's your favorite living artist?
I generally like the Pop Artists.
What are your hobbies?
I run and I box. Sometimes I fix broken stuff at home.