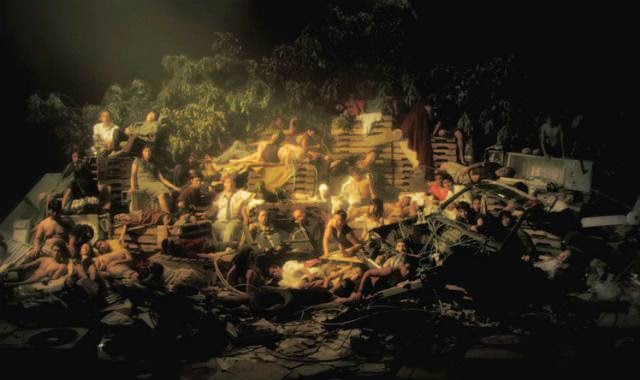 The Singapore Art Museum and Asia Pacific Breweries Foundation have announced the 15 artworks vying for the APB Foundation Signature Art Prize 2014.
Now in its third installment, the prize seeks to reward artists in the Asia Pacific region who have created compelling contemporary artworks from the last three years.

A statement from the jury panel stated, “The finalist works stood out for their strength of concept and execution and despite stemming from such diverse contexts, histories and cultural backgrounds, cleverly explored similar issues of identity, immigration, urban expansion, depletion of natural resources, fading of old values, cultural diversity and more … Overall, the 15 works selected offer a glimpse of the future of our region’s rich and constantly evolving contemporary art scene.”
Click here to see all the works:
- Golden Teardrop by Thai artist Arin Rungjang, a sculpture and video installation that looks at the human movement and the exchange of cultures.
- Custos Cavum (Guardian of the hole) by Korean artist Choe U-Ram, a massive kinetic sculpture depicting a majestic creature that seems to come from a distant past or an apocalyptic future.
- Kahani Eik Shehr Ki (story of a city) by Pakistani artist Farida Batool, a lenticular print installation that brings viewers on a walk down a busy city street in Lahore,
- One places / on “the room” by Japanese artist Go Watanabe, a video installation that challenges the viewer’s way of looking at time and space.
-PYTHAGAROS by Singaporean artist Ho Tzu Nyen, an immersive video installation exploring the concept of the unseen.
- In Pursuit of Venus by Lisa Reihana from New Zealand a video installation reflecting the beauty of the Pacific Islands while offering a nuanced critique of its colonial legacies.
-Trace by Chinese artist Liu Jianhua, a porcelain installation inspired by the traditional art forms of calligraphy to comment on societal ills
- I’m a Ghost in My Own House by Indonesian artist Melati Suryodarmo, a 12-hour performance that sees the artist grind and crush hundreds of kilograms of charcoal.
- Rankin Street, 1953 by Naeem Mohaiemen of Bangladesh, a mixed media installation that reveals the artist’s memories of his family through vintage photograph negatives.
- Infinite Love by Australian artist Owen Leong, a performance that explores the body as a physical site for social, cultural, and political forces in relation to the artist’s Asian-Australian identity.
- Unsubtitled by Vietnamese artist Nguyen Trinh Thi, a mixed media installation looking at freedom of expression through an installation about Nhan Van-Giai Pham – a suppressed literary movement of the 1950s.
- Letters From a Distance by Chinese artist Peng Wei, a mixed media installation using Chinese aesthetic objects like scrolls and leaves melded together with texts from Western philosophers.
- House of Opaque Water by Indian artist Ranbir Kaleka, a video installation presenting the idea of displacement and society’s response to these situations
- Mirage – Disused Public Property in Taiwan by Yao Jui-Chung & Lost Society Document (LSD), a video and photograph installation on Taiwan’s ‘mosquito halls’ (deserted public construction projects)
- Eskimo wolf trap often quoted in sermons by Singapore artist  Zhao Renhui, a mixed media installation,
The APB Foundation Signature Art Prize Exhibition will take place at the Singapore Art Museum November 14 to March 14, 2015 with the winners announced at an awards ceremony on January 22.
Asian Art Singapore