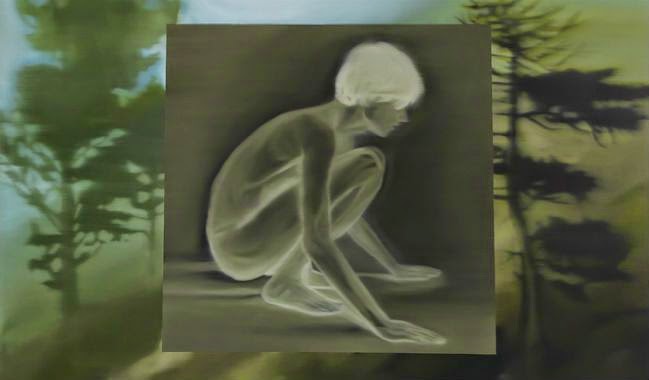 After making his name with slightly blurred floral paintings, Eric Chan pursued for several years a distinctive visual language of reverse negative effect, as if X-raying his subjects. His latest works, showing at Chan Hampe Galleries in an exhibition called “Beautiful Stories: Chapter One,” is a new progression for the Malaysian artist, who returns to his slightly blurry image technique, this time taking on more general landscapes and portraits.
“These pieces incorporate techniques and subject matter that each have been featured at different times in my earlier paintings, this is just the first time I've used them all within a single body of work. This is really more of a fusion of established techniques, so to speak,” he explains.
Several paintings are presented as a split panel, with an object or character straddling two different worlds as if in a dream-like sequence, the past blurring with the present, reality blurring with fantasy
While Chan's works are often autobiographical, his presence hereis felt only as narrator, leaving each story up to the viewer to interpret.
“The most significant shift in this collection is the role I play,” he says, “ Previous works tent to be somewhat autobiographical in nature, but here my goal is to create a mood, a tangible atmosphere that encourages the viewer to get carried away within the internal narrative they create themselves for each piece.”
“The purpose is not to tell a cohesive or contingent story, but rather that each painting evokes a similar emotional quality or impression. It's almost like a series of short stories that share a motif, while each is completely independent, when considered together you realize that each articulates a different layer or path to a similar destination,” he adds.
“Beautiful Stories: Chapter One” runs from June 6 – July 6