‘UNEARTHED’ Digs into our Relation with the Natural World 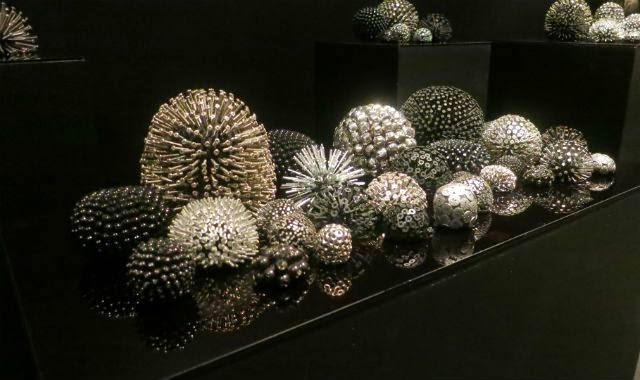 Singapore maybe known as a garden city or even a city in a garden, but the is still a lot of concrete and glass, with developers constantly ‘reinventing’ buildings — a 40-year-old building is ‘ancient’ by local standards and never far off from being sold for redevelopment.

In a country where the issue of land is almost always only talked of in terms of real estate value, a new exhibition, UNEARTHED at the Singapore Art Museum aims to make visitors stop and wonder how we should perhaps see our environment and how we relate to it.


Installation artist Twardzik Ching Chor Leng sets the tone with the “opening” piece of the show in the atrium, where a 240 cm by 240 cm section of turf from the front of the museum has been transported and elevated, trying to bring the smell and beauty of nature closer to the visitor and make us consider the importance of our environment.

With 28 artworks across various mediums, the exhibition aims to explore the concept of nature as an object and subject, “one that can be and has been studied, controlled, and constructed.” Topics such as water, geography, natural history, raw materials, and the fragility of nature are featured in the works of established artists such as Ang Song Nian, Donna Ong, Genevieve Chua, Debbie Ding, Ho Tzu Nyen, Lucy Davis, Ezzam Rahman, and Han Sai Por, as well as by emerging artists like Jennifer Ng and Frayn Yong.

Some artists went for a more poetic interpretation of the theme. “Landscape Portrait: In A Beautiful Place Nearby” by Donna Ong presents the artist’s take on an underwater world of unusual corals using nails, screws, nuts, and bolts (a work first seen at an exhibition at the Louis Vuitton Espace in Singapore, but is now shown on a much grander scale occupying an entire room. Another impressive work is Terra Firma by young artist Frayn Yong, who has constructed delicate miniature panoramas from incredibly fine pencil lead.

Amongst some of the most intriguing works are Ezzam Rahman’s fossil sculptures using the artist’s own skin, Ouch!; Animal Traps by Robert Zhao: Institute of Critical Zoologists which alludes to animals and nature by their absence, and Lucy Davis’ mixed-media installation All the Way Down, which uses yellowed newspaper clipping found inside a taxidermy tortoise from the former Raffles museum of Biodiversity Research collection. The newspapers date from the early 20th century and reference the Swatow Rebellion and other historical events of the time. Pieced together, they form a collage collapsing multiple histories and are presented in a floating column above an apparition of the tortoise they had once formed.-