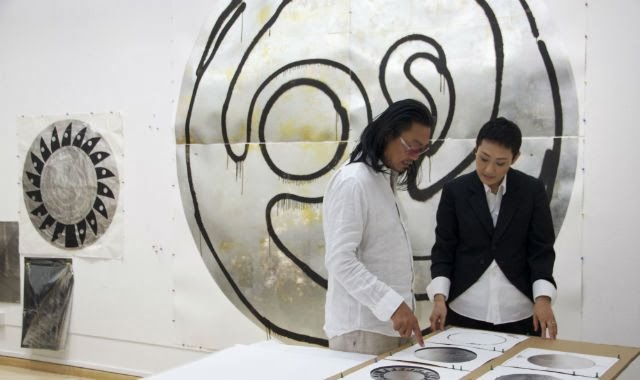 The Singapore Tyler Print Institute (STPI) will be returning to Art Basel, opting this time for an extensive presentation of its latest collaborative project: working with influential conceptual artist Rirkrit Tiravanija.

Born in Argentina and of Thai descent, Tiravanija rose to preeminence in the early 1990s with his interactive performances where he would prepare and serve Thai food to gallery goers. Since, most of the conceptual works by the 2004 Hugo Boss Prize winner have involved participatory aspects. For example, with Untitled 1999 (“Tomorrow Can Shut Up and Go Away”), he created a life-sized replica of his apartment and opened it to the public 24 hours a day, encouraging people to stay.

After a five-week residency with the STPI, Tiravanija has created works over 20 weeks which will be unveiled at Art Basel. Most of these are monumental scale works, including 3D object pieces and interactive wall pieces using heat sensitive ink that changes opacity to reveal layers of printed text upon contact.

Emi Eu, director of the STPI explains the new project is based on the concept of time. “Tiravanija's 'time machine' pieces are composed of stunning, large-scale silver prints on paper and are set to challenge viewers to go beyond what we see, think and imagine visually,” she promises.

“I was interested in bringing sculptural dimensions to the print itself and to create a narrative about going through space and time travel,” the artist explained.
Silver is the running theme through the works as Tiravanija wanted a surface that could “reflect and absorb” time and space. “I was trying to achieve chrome, but silver was the closest we could realize as a print,” he said, adding, “the silver surface represents both a mirror, reflecting the viewer and the viewing space, while at the same moment it also acts like a void, a non-space … As I would like the surface to represent the possibilities of present, past, and the future, relating back to the central narrative of time traveling, the silver surface becomes the portal to and from which we start the journey.”
Tiravanija admitted that print medium was a challenge, as he doesn’t usually work with two-dimensional works or imagery in his daily practice. “But the open-ended nature of STPI’s approach to the idea of print and printmaking gave me a lot of room to think and work out my ideas. In the end, I dealt with the surface and images by introducing the notion of time to play with the ideas of dimensions,” he said.

Asked about the most exciting aspect of the STPI collaboration, he replied, “being in the workshop with all the people who are working there, testing the possibilities, making mistakes, and finding solutions. And going out to lunch and having noodle soup!”
Though its booth at Art Basel will be dedicated to Tiravanija, the STPI will also bring along some works by Singaporean artist Charles Lim, known for film work that investigates relationships between sea and land.
Last year, the first time STPI had exhibited at the fair, it had brought mixed works by Genevieve Chua, Heman Chong, Haegue Yang, Ronald Ventura and Hong Zhu An, as well as pieces by Trenton Doyle Hancock. Sales were reportedly modest, at S$80,000, but Eu said the benefits for participating in the international platform extended well-beyond pure sales.