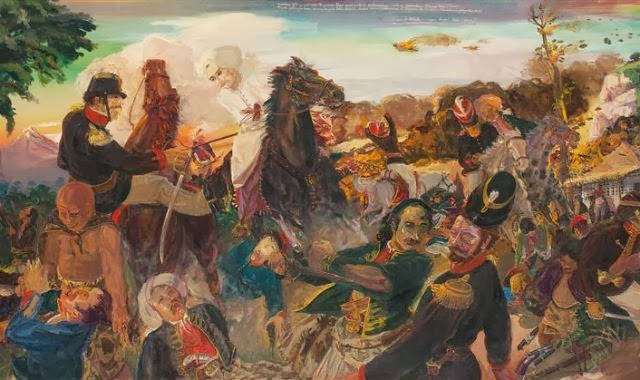 Sotheby's Hong Kong will be selling 16 works from Southeast Asian artists as part of its Modern and Contemporary Asian Art – Evening Sale Saturday, April 5, which will include a total 50 lots worth an estimated HK$400 million (US$51 million) or more.

One work, Pasukan Kita Yang Dipimpin Pangeran Diponegoro (Our Soldiers Led Under Prince Diponegoro), 1979, by sought-after Indonesian modern master S. Sudjojono depicting the national hero Prince Diponegoro and his military troops’ victory against the Dutch colonial soldiers during the Java war (1825 – 1830) is expect to fetch in excess of HK$20 million (US$2.5 million). Recognized as the father of Indonesian Modern Art, S. Sudjojono’s works were mainly influenced by his nationalistic ideals and patriotic feelings and this painting was a direct commentary on the political climate of the time Indonesia struggled against foreign influences and revolutionary ideals.

Tanah Airku (My Homeland), 1981, by Sudjana Kerton’s is another large canvas by one of Indonesia’s modern masters and is expected to attract high interest (Est: US$644,000 – 900,000). The work, which is making its first appearance at auction, showcases the artist’s idyllic vision of rural simplicity and communal friendliness.

Malay Life, 1981, by Cheong Soo Pieng, a Singaporean artist who has been much in demand in recent years at auction, is expected to fetch (Est: US$129,000 – 193,000). Though it was painted in the later part of his career, the work arcs back to his earlier Nanyang period with beautifully stylized long-limbed women.

Amongst contemporary works, Sotheby’s will auction Filipino artist Ronald Ventura’s Gateway, 2013 (Est: US$88,000 – 126,000) which showcases the busy and often surreal imagery typical many of the artist’s works. Here an enormous sharp-toothed lion holds in its mouth a finely crafted children’s carousel.
As first published on BlouinArtinfo.com